Download this LitChart! (PDF)
Teachers and parents! Struggling with distance learning? Our Teacher Edition on The Heart is a Lonely Hunter can help.

Welcome to the LitCharts study guide on Carson McCullers's The Heart is a Lonely Hunter. Created by the original team behind SparkNotes, LitCharts are the world's best literature guides.

The Heart is a Lonely Hunter: Introduction

A concise biography of Carson McCullers plus historical and literary context for The Heart is a Lonely Hunter.

The Heart is a Lonely Hunter: Plot Summary

A quick-reference summary: The Heart is a Lonely Hunter on a single page.

The Heart is a Lonely Hunter: Detailed Summary & Analysis

In-depth summary and analysis of every chapter of The Heart is a Lonely Hunter. Visual theme-tracking, too.

The Heart is a Lonely Hunter: Themes

Explanations, analysis, and visualizations of The Heart is a Lonely Hunter's themes.

The Heart is a Lonely Hunter: Quotes

The Heart is a Lonely Hunter's important quotes, sortable by theme, character, or chapter.

The Heart is a Lonely Hunter: Characters

Description, analysis, and timelines for The Heart is a Lonely Hunter's characters.

The Heart is a Lonely Hunter: Symbols

Explanations of The Heart is a Lonely Hunter's symbols, and tracking of where they appear.

The Heart is a Lonely Hunter: Theme Wheel

An interactive data visualization of The Heart is a Lonely Hunter's plot and themes.

Born in Georgia in 1917, Carson McCullers demonstrated artistic promise from an early age—even as her tomboyish style, introspective nature, and battles with several bouts of rheumatic fever alienated her from many of her peers. McCullers, a dedicated piano student, practiced music several hours each day.  At the encouragement of her watchmaker father, she began writing stories as well. At 17, McCullers moved to New York City to continue her piano studies at Juilliard—but after falling on hard times in the city, she spent her time working odd jobs and taking writing classes. McCullers began dividing her time between New York and Columbus, Ohio after another bout of rheumatic fever. Her 1937 marriage to Reeves McCullers took her to Charlotte, North Carolina, where the couple lived for several years until their divorce in 1941. McCullers then returned to New York, where she moved in trendy literary circles, became a member of the artists’ salon February House, and made connections that would allow her to move to Paris after the end of World War II. McCullers had relationships with a number of women and often dressed in men’s clothing—and yet in 1945 she remarried Reeves McCullers, who himself had homosexual relationships throughout their marriage. Reeves McCullers committed suicide in Paris in 1953, after which McCullers retreated to upstate New York. In spite of a series of strokes that left her largely paralyzed by the age of 31, McCullers remained prolific throughout her career. Her novels The Heart is a Lonely Hunter, The Member of the Wedding, and Reflections in a Golden Eye explore themes of alienation, radical politics, and the struggle to live a decent, empathetic life. Her work has been widely adapted for stage and screen, and her novels and short stories alike remain oft-cited examples of Southern Gothic literature.
Get the entire The Heart is a Lonely Hunter LitChart as a printable PDF.
"My students can't get enough of your charts and their results have gone through the roof." -Graham S.
Download 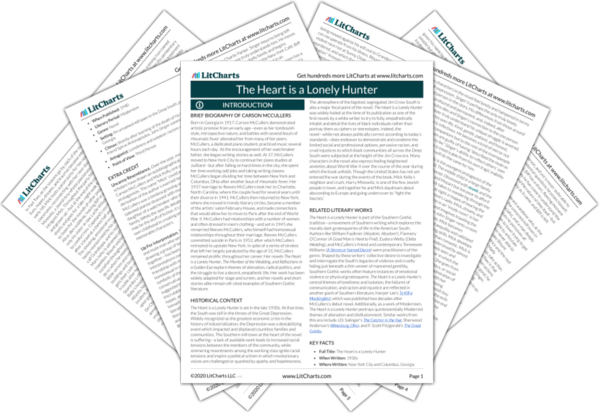 Historical Context of The Heart is a Lonely Hunter

The Heart is a Lonely Hunter is set in the late 1930s. At that time, the South was still in the throes of the Great Depression. Widely recognized as the greatest economic crisis in the history of industrialization, the Depression was a destabilizing event which impacted and displaced countless families and communities. The Southern mill town at the heart of the novel is suffering—a lack of available work leads to increased social tensions between the members of the community, while simmering resentments among the working class ignite racial tensions and inspire a political schism in which revolutionary voices are challenged or quashed by apathy and hopelessness. The atmosphere of the bigoted, segregated Jim Crow South is also a major focal point of the novel. The Heart is a Lonely Hunter was widely hailed at the time of its publication as one of the first novels by a white writer to try to fully, empathetically inhabit and detail the lives of black individuals rather than portray them as ciphers or stereotypes. Indeed, the novel—while not always politically correct according to today’s standards—does endeavor to demonstrate and condemn the limited social and professional options, pervasive racism, and cruel injustices to which black communities all across the Deep South were subjected at the height of the Jim Crow era. Many characters in the novel also express feeling heightened anxieties about World War II over the course of the year during which the book unfolds. Though the United States has not yet entered the war during the events of the book, Mick Kelly’s neighbor and crush, Harry Minowitz, is one of the few Jewish people in town, and together he and Mick daydream about absconding to Europe and going undercover to “fight the fascists.”

Other Books Related to The Heart is a Lonely Hunter

The Heart is a Lonely Hunter is part of the Southern Gothic tradition—a movement of Southern writing which explores the morally dark grotesqueries of life in the American South. Authors like William Faulkner (Absalom, Absalom!), Flannery O’Connor (A Good Man Is Hard to Find), Eudora Welty (Delta Wedding), and McCullers’s friend and contemporary Tennessee Williams (A Streetcar Named Desire) were practitioners of the genre. Shaped by these writers’ collective desire to investigate and interrogate the South’s legacies of violence and cruelty hiding just beneath a thin veneer of mannered gentility, Southern Gothic works often feature instances of emotional violence or physical grotesquerie. The Heart is a Lonely Hunter’s central themes of loneliness and isolation, the failures of communication, and racism and injustice are reflected in another giant of Southern literature, Harper Lee’s To Kill a Mockingbird, which was published two decades after McCullers’s debut novel. Additionally, as a work of Modernism, The Heart is a Lonely Hunter portrays quintessentially Modernist themes of alienation and disillusionment. Similar works from this era include J.D. Salinger's The Catcher in the Rye; Sherwood Anderson’s Winesburg, Ohio; and F. Scott Fitzgerald’s The Great Gatsby.
Key Facts about The Heart is a Lonely Hunter

Extra Credit for The Heart is a Lonely Hunter

Uncanny Resemblance. Over the year, many critics and scholars have drawn an autobiographical connection between Carson McCullers and Mick Kelly, one of the novel’s protagonists. The name “Mick” could arguably be read as a derivation of the author’s married last name. Like Mick, McCullers was a tomboy growing up, was also a devoted and talented pianist obsessed with music, and was also the daughter of a watchmaker who struggled to provide for his family. While the specific details of Mick’s girlhood very well may be the stuff of fiction, it’s clear McCullers drew upon her own childhood in creating one of the novel’s most iconic and memorable characters.

Up For Interpretation. The character of John Singer—a deaf and mute man who serves as the novel’s centripetal point, drawing a group of lonely and disconnected people together—has been the subject of many different theories and interpretations over the years. Some scholars suggest Singer’s friendship with Antonapoulos—another deaf and mute man—is homosexual in nature, and that the men’s shared afflictions are symbolic of their need to remain closeted in the hostile, socially conservative environment of the Deep South. Others have suggested that Singer is an allegory for God, a benevolent but inscrutable presence who must listen to the prayers, worries, hopes, and rants of others without ever being able to make himself heard or understood in return. Whether interpreted literally or allegorically, Singer remains one of 20th-century literature’s most striking, intriguing, and baffling characters, and his thoughts and actions have fascinated readers for nearly 80 years. 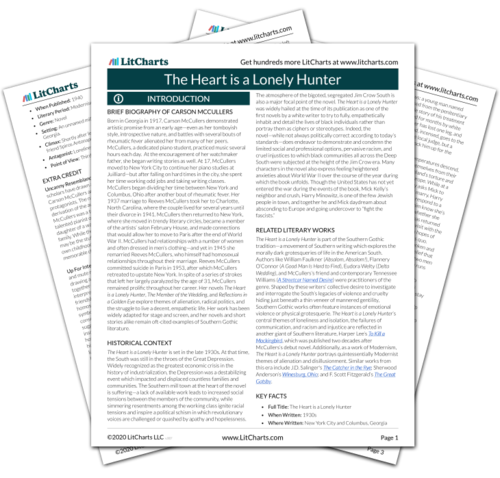 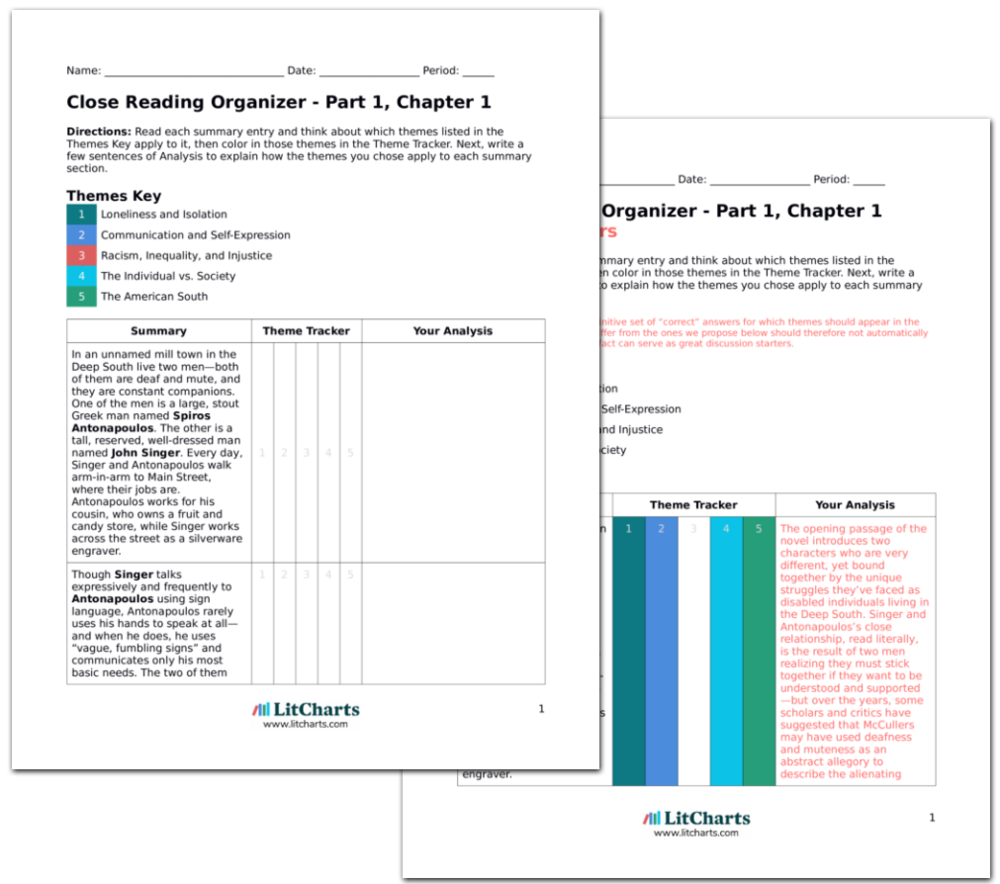