Download this LitChart! (PDF)
Teachers and parents! Struggling with distance learning? Our Teacher Edition on The House of the Seven Gables can help.
Matthew Maule is an obscure cottager in 1600s Massachusetts, whose small plot of land Colonel Pyncheon covets. Maule is a stubborn, prideful man, and the dispute over the property goes unresolved until Maule ends up being tried and executed for alleged witchcraft. Colonel Pyncheon is believed to have taken an enthusiastic role in the sentencing. From the scaffold before his death, Maule declares a curse on Colonel Pyncheon and his posterity: “God will give [them] blood to drink!” Colonel Pyncheon mysteriously dies soon after this, and his descendants seem to bear the effects of the curse as well.

Matthew Maule Quotes in The House of the Seven Gables

The The House of the Seven Gables quotes below are all either spoken by Matthew Maule or refer to Matthew Maule. For each quote, you can also see the other characters and themes related to it (each theme is indicated by its own dot and icon, like this one:

). Note: all page numbers and citation info for the quotes below refer to the Dover Thrift Editions edition of The House of the Seven Gables published in 1999.
Chapter 1 Quotes

At the moment of execution—with the halter about his neck, and while Colonel Pyncheon sat on horseback, grimly gazing at the scene—Maule had addressed him from the scaffold, and uttered a prophecy, of which history, as well as fireside tradition, has preserved the very words. "God," said the dying man, pointing his finger, with a ghastly look, at the undismayed countenance of his enemy, "God will give him blood to drink!"

To all appearance, they were a quiet, honest, well-meaning race of people, cherishing no malice against individuals or the public for the wrong which had been done them; or if, at their own fireside, they transmitted, from father to child, any hostile recollection of the wizard’s fate and their lost patrimony, it was never acted upon, nor openly expressed. Nor would it have been singular had they ceased to remember that the House of the Seven Gables was resting its heavy framework on a foundation that was rightfully their own. There is something so massive, stable, and almost irresistibly imposing in the exterior presentment of established rank and great possessions that their very existence seems to give them a right to exist; at least, so excellent a counterfeit of right, that few poor and humble men have moral force enough to question it, even in their secret minds.

“My dearest Phoebe,” said Holgrave, "how will it please you to assume the name of Maule? As for the secret, it is the only inheritance that has come down to me from my ancestors. You should have known sooner (only that I was afraid of frightening you away) that, in this long drama of wrong and retribution, I represent the old wizard, and am probably as much a wizard as ever he was. The son of the executed Matthew Maule, while building this house, took the opportunity to construct that recess, and hide away the Indian deed, on which depended the immense land claim of the Pyncheons. Thus they bartered their Eastern territory for Maule's garden ground.

Unlock with LitCharts A+
Get the entire The House of the Seven Gables LitChart as a printable PDF.
"My students can't get enough of your charts and their results have gone through the roof." -Graham S.
Download 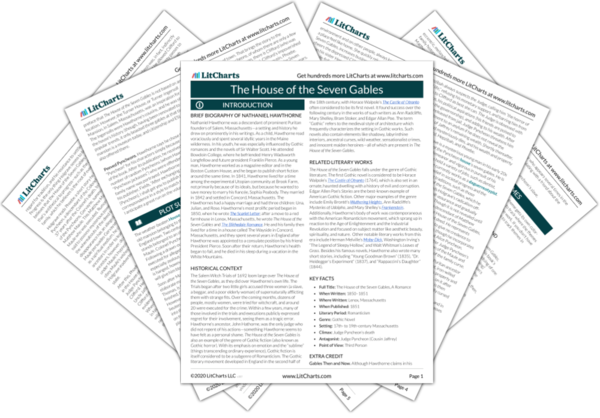 Matthew Maule Character Timeline in The House of the Seven Gables

The timeline below shows where the character Matthew Maule appears in The House of the Seven Gables. The colored dots and icons indicate which themes are associated with that appearance.

...wasn’t the first dwelling to be built on this ground. Originally, a cottager named Matthew Maule lived here, on the site of a freshwater spring. After 30 or 40 years, a... (full context)

Matthew Maule is executed for witchcraft—a “terrible delusion” to which the influential were just as susceptible as... (full context)

...with blood. He is dead! Someone among the group is said to have repeated Matthew Maule’s prophecy, “God hath given him blood to drink!” (full context)

...seem doubtful about their rights to the property. Legally, their right is certain, but Matthew Maule “[plants] a heavy footstep […] on the conscience” of many Pyncheons—to the point that it... (full context)

Popular rumors continue to circulate regarding the Pyncheons and Maule’s curse, especially since, about 100 years ago, another Pyncheon died under circumstances similar to the... (full context)

...melancholy,” with an interest in family history. This research led him to believe that Matthew Maule had been cheated out of his property and probably his life. His conscience urged him... (full context)

It is supposed that Matthew Maule’s descendants have died out, but they continued living quietly in town for a long time,... (full context)

...of the flowers. Before retiring for the evening, Holgrave warns her not to drink from Maule’s well, because its water is bewitched. (full context)

...very familiar with the Pyncheon family history. But she does know the story of Matthew Maule’s curse and the story that blood could sometimes be heard gurgling in Pyncheon throats—so when... (full context)

...Clifford’s request, have been set free from their coop—and admiring the shifting sunlight reflecting in Maule’s Well. However, sometimes Clifford becomes frightened, believing that he sees a “dark face” in the... (full context)

Matthew Maule the carpenter is not well liked. His grandfather is believed to haunt the House of... (full context)

...some years in Europe, the House is now bustling with his large family. When Matthew Maule the carpenter arrives there, he pridefully and bitterly approaches the front door instead of the... (full context)

Matthew Maule the carpenter, however, boldly steps to the fire and looks Gervayse Pyncheon in the face,... (full context)

There have long been rumors that the disappeared deed has some connection to the Maule family. A superstitious legend even led to the searching of Matthew Maule’s grave—where, mysteriously, the... (full context)

Maule the carpenter then explains that if Gervayse wishes to recover the lost document, he must... (full context)

With confusion, Gervayse Pyncheon explains that Maule the carpenter has some business with Alice,  because Alice’s help is supposedly required in recovering... (full context)

Maule the carpenter then beckons to Alice, and she rises and moves toward him. Maule triumphantly... (full context)

At this, Gervayse Pyncheon gurgles with rage, and Maule the carpenter jeers about the old curse. He leaves, but he promises that Alice, upon... (full context)

Some time later, Alice goes to a bridal party—the daughter of a laborer, whom Maule the carpenter is about to marry. Humbly, Alice waits upon and kisses Maule’s bride. After... (full context)

...He realizes that if he chose, he could attain mastery over Phoebe’s spirit much as Maule the carpenter did over Alice’s. But he forbids himself this temptation, waking her with a... (full context)

...befall her family. He does, however, have a morbid suspicion of Judge Pyncheon. He hears Maule’s well murmuring strangely. (full context)

...planned to buy a small portion of the old Pyncheon property, which had belonged to Maule’s garden. After various other errands, Judge Pyncheon was supposed to have met with his political... (full context) 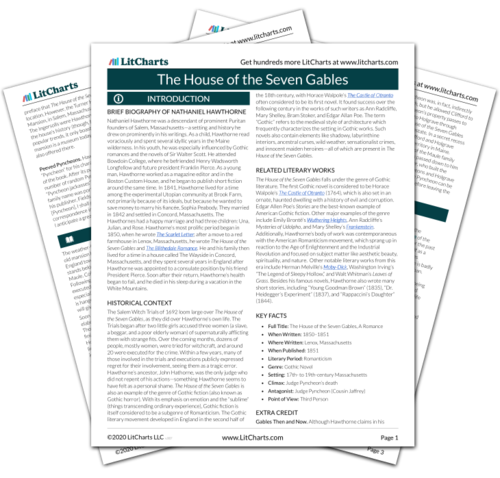 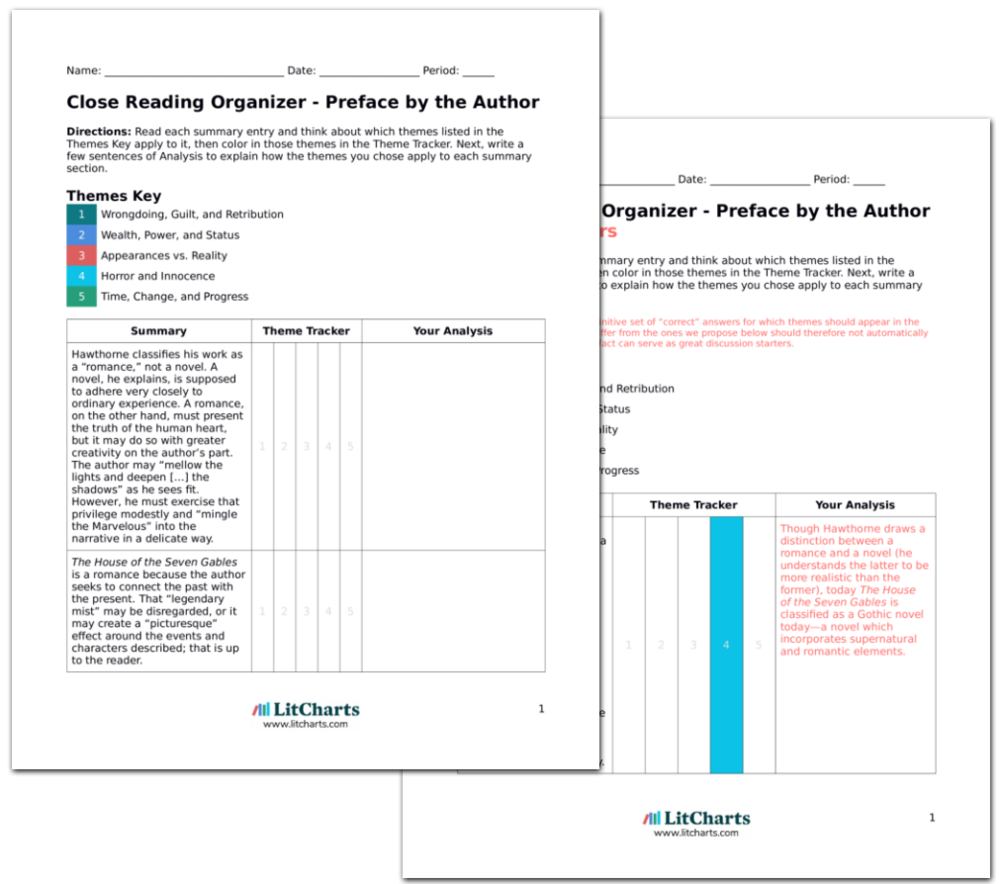