Get LitCharts A+
LitCharts assigns a color and icon to each theme in The House on Mango Street, which you can use to track the themes throughout the work.

One of the most important themes of The House on Mango Street is the power of words. Esperanza first learns that the lack of language (especially English) means powerlessness, as with Mamacita, who is trapped in her apartment by her ignorance and fear of English. This leads to Esperanza understanding the power of controlling language, which first comes through the idea of names. Esperanza has only one name while most characters have several – an English and Spanish name, or nicknames – and she tries to change her name to empower herself and show the “real me.”

Esperanza then expands from names to language itself, and she realizes that mastery over words brings a kind of freedom. She can translate her bad experiences into beautiful language (as she starts to write poetry), which both makes them less bad and helps her process them. Esperanza ultimately hopes to find physical freedom through her writing, as she vows to keep studying and escape Mango Street, yet part of her final promise to return for those “left behind” involves writing about their experiences and memorializing their suffering. 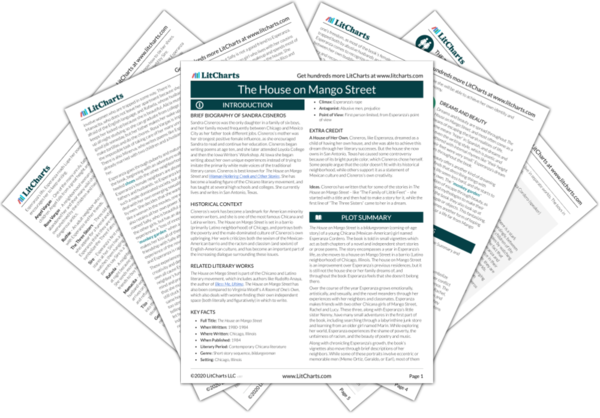 Language and Names Quotes in The House on Mango Street

Below you will find the important quotes in The House on Mango Street related to the theme of Language and Names.
Chapter 3 Quotes

Someday I will have a best friend of my own. One I can tell my secrets to. One who will understand my jokes without my having to explain them. Until then I am a red balloon, a balloon tied to an anchor.

In English my name means hope. In Spanish it means too many letters. It means sadness, it means waiting… It was my great-grandmother’s name and now it is mine. She was a horse woman too, born like me in the Chinese year of the horse – which is supposed to be bad luck if you’re born female – but I think this is a Chinese lie because the Chinese, like the Mexicans, don’t like their women strong.

No wonder everybody gave up. Just stopped looking out when little Efren chipped his buck tooth on a parking meter and didn’t even stop Refugia from getting her head stuck between two slats in the back gate and nobody looked up not once the day Angel Vargas learned to fly and dropped from the sky like a sugar donut, just like a falling star, and exploded down to earth without even an “Oh.”

That’s nice. That’s very good, she said in her tired voice. You just remember to keep writing, Esperanza. You must keep writing. It will keep you free, and I said yes, but at that time I didn’t know what she meant.

Everything is holding its breath inside me. Everything is waiting to explode like Christmas. I want to be all new and shiny. I want to sit out bad at night, a boy around my neck and the wind under my skirt. Not this way, every evening talking to the trees, leaning out my window, imagining what I can’t see.

A boy held me once so hard, I swear, I felt the grip and weight of his arms, but it was a dream.

Their strength is secret. They send ferocious roots beneath the ground. They grow up and they grow down and grab the earth between their hairy toes and bite the sky with violent teeth and never quit their anger. This is how they keep…

When I am too sad and too skinny to keep keeping, when I am a tiny thing against so many bricks, then it is I look at trees… Four who grew despite concrete. Four who reach and do not forget to reach.

Sally, do you sometimes wish you didn’t have to go home? Do you wish your feet would one day keep walking and take you far away from Mango Street, far away and maybe your feet would stop in front of a house, a nice one with flowers and big windows and steps for you to climb up two by two upstairs to where a room is waiting for you.

Not a man’s house… A house all my own. With my porch and my pillow, my pretty purple petunias. My books and my stories. My two shoes waiting beside the bed… Only a house quiet as snow, a space for myself to go, clean as paper before the poem.

Unlock with LitCharts A+
Chapter 44 Quotes

I put it down on paper and then the ghost does not ache so much. I write it down and Mango says goodbye sometimes. She does not hold me with both arms. She sets me free.

One day I will pack my bags of books and paper. One day I will say goodbye to Mango. I am too strong for her to keep me here forever. 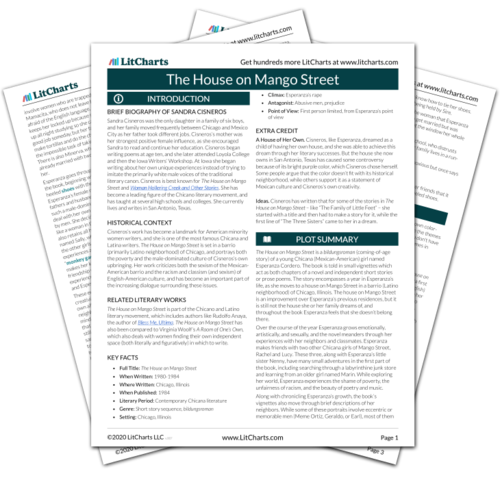 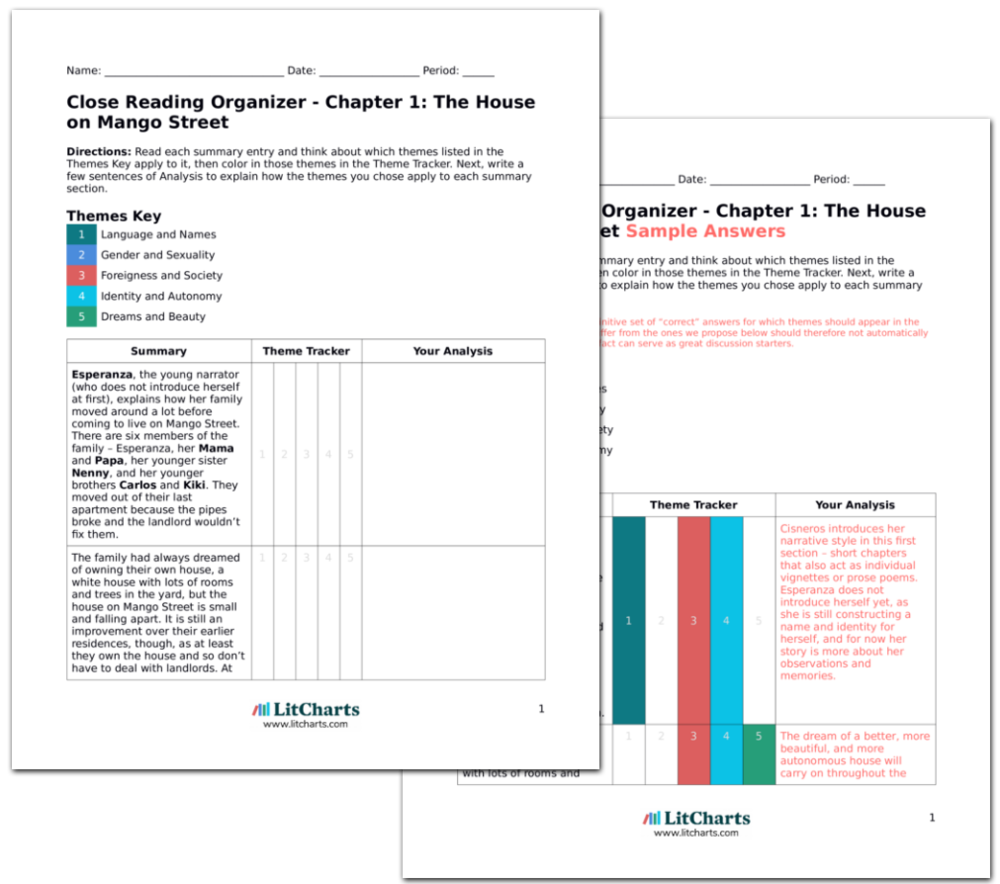