Download this LitChart! (PDF)
Teachers and parents! Struggling with distance learning? Our Teacher Edition on The Idiot can help.

Welcome to the LitCharts study guide on Fyodor Dostoevsky's The Idiot. Created by the original team behind SparkNotes, LitCharts are the world's best literature guides.

A concise biography of Fyodor Dostoevsky plus historical and literary context for The Idiot.

A quick-reference summary: The Idiot on a single page.

In-depth summary and analysis of every chapter of The Idiot. Visual theme-tracking, too.

Explanations, analysis, and visualizations of The Idiot's themes.

The Idiot's important quotes, sortable by theme, character, or chapter.

Description, analysis, and timelines for The Idiot's characters.

Explanations of The Idiot's symbols, and tracking of where they appear.

An interactive data visualization of The Idiot's plot and themes.

Fyodor Dostoevsky was born into a noble family in Russia. His father was a doctor. As a child, Dostoevsky suffered from ill health, and developed an early love of literature. His mother died of tuberculosis when he was a teenager, and his father died two years later. It was around this time that Dostoevsky, like the hero of The Idiot, Prince Myshkin, began to suffer from epilepsy. Not long after, he started gambling, a habit that became a lifelong problem for him. Dostoevsky’s first novel, Poor Folk, was published in 1846. During this period, Dostoevsky became interested in socialism, although he clashed with other socialists over the issue of religion, as he was a devout adherent to the Russian Orthodox Church. He joined a reformist group named the Petrashevsky Circle, who were denounced to the authorities. Dostoevsky and the other members were sentenced to death by firing squad, but at the final moment, just before they were about to be shot, the sentence was switched to hard labor in Siberia. In the prison camp there, his health worsened. After being released, he married his first wife, Maria, in 1857. Their marriage was passionate but troubled. In 1864 Maria died, and in 1867 Dostoevsky married his second wife, Anna. He was deeply in debt due to his gambling addiction. He and Anna had four children, two of whom died in infancy. During the 1870s, Dostoevsky health declined, and in 1881 he died of a pulmonary hemorrhage.
Get the entire The Idiot LitChart as a printable PDF.
"My students can't get enough of your charts and their results have gone through the roof." -Graham S.
Download 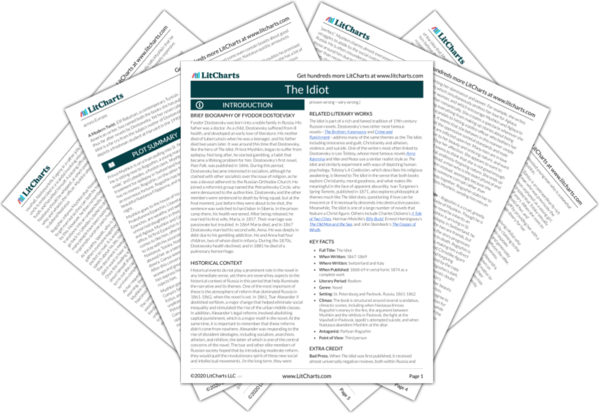 Historical Context of The Idiot

Historical events do not play a prominent role in the novel in any immediate sense, yet there are several key aspects to the historical context of Russia in this period that help illuminate the narrative and its themes. One of the most important of these is the atmosphere of reform that dominated Russia in 1861-1862, when the novel is set. In 1861, Tsar Alexander II abolished serfdom, a major change that helped eliminate social inequality and stimulated the rise of the urban middle classes. In addition, Alexander’s legal reforms involved abolishing capital punishment, which is a major motif in the novel. At the same time, it is important to remember that these reforms didn’t come from nowhere. Alexander was responding to the rise of dissident ideologies, including socialism, anarchism, atheism, and nihilism, the latter of which is one of the central concerns of the novel. The tsar and other elite members of Russian society hoped that by introducing moderate reform, they would quell the revolutionary spirit of these new social and intellectual movements. (In the long term, they were proven wrong—very wrong.)

Other Books Related to The Idiot

The Idiot is part of a rich and famed tradition of 19th century Russian novels. Dostoevsky’s two other most famous novels—The Brothers Karamazov and Crime and Punishment—address many of the same themes as the The Idiot, including innocence and guilt, Christianity and atheism, violence, and suicide. One of the writers most often linked to Dostoevsky is Leo Tolstoy, whose most famous novels Anna Karenina and War and Peace use a similar realist style as The Idiot and similarly experiment with ways of depicting human psychology. Tolstoy’s A Confession, which describes his religious awakening, is likened to The Idiot in the sense that both books explore Christianity, moral goodness, and what makes life meaningful in the face of apparent absurdity. Ivan Turgenev’s Spring Torrents, published in 1871, also explores philosophical themes much like The Idiot does, questioning if love can be innocent or if it necessarily descends into destructive passion. Meanwhile, The Idiot is one of a large number of novels that feature a Christ figure. Others include Charles Dickens’s A Tale of Two Cities, Herman Melville’s Billy Budd, Ernest Hemingway’s The Old Man and the Sea, and John Steinbeck’s The Grapes of Wrath.
Key Facts about The Idiot

Extra Credit for The Idiot

Bad Press. When The Idiot was first published, it received almost universally negative reviews, both within Russia and across Europe.

A Modern Twist. Elif Batuman, a contemporary Turkish-American writer, has named both the books she has published thus far after novels by Dostoevsky. Yet her novel called The Idiot is a far cry from the subject matter of Dostoevsky’s text—it depicts a freshman student at Harvard in the 1990s. 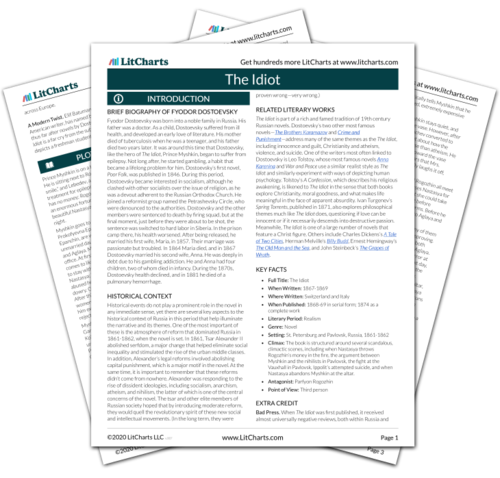 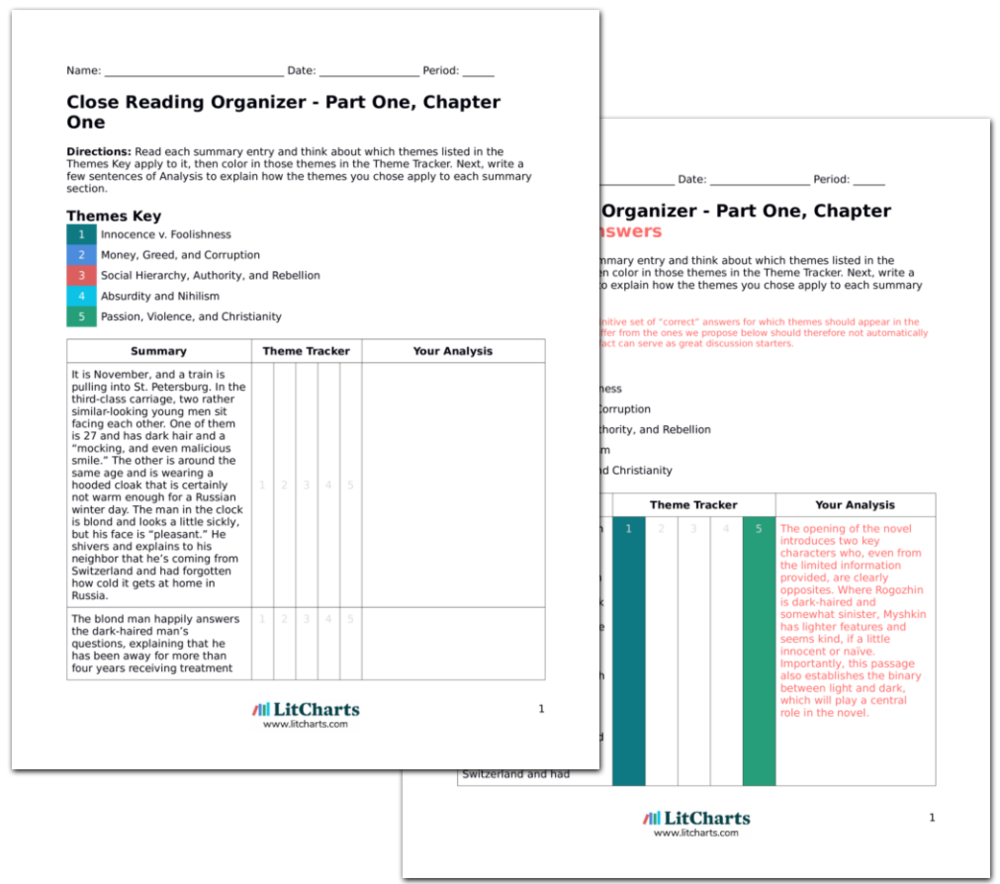