Download this LitChart! (PDF)
Teachers and parents! Struggling with distance learning? Our Teacher Edition on The Inconvenient Indian can help.

Welcome to the LitCharts study guide on Thomas King's The Inconvenient Indian. Created by the original team behind SparkNotes, LitCharts are the world's best literature guides.

A concise biography of Thomas King plus historical and literary context for The Inconvenient Indian.

A quick-reference summary: The Inconvenient Indian on a single page.

In-depth summary and analysis of every chapter of The Inconvenient Indian. Visual theme-tracking, too.

Explanations, analysis, and visualizations of The Inconvenient Indian's themes.

Description, analysis, and timelines for The Inconvenient Indian's characters.

Description, analysis, and timelines for The Inconvenient Indian's terms.

Explanations of The Inconvenient Indian's symbols, and tracking of where they appear.

An interactive data visualization of The Inconvenient Indian's plot and themes.

Thomas King is a Canadian author and activist. He was born in Roseville, California, and is of German and Greek descent on his mother’s side and Cherokee descent on his father’s side. King grew up in California and earned his undergraduate and master’s degrees from Chico State University in California and his doctorate in English from the University of Utah. His doctoral dissertation analyzed Native American oral storytelling tradition as literature. King emigrated to Canada in 1980 and later taught in the Native Studies department at the University of Lethbridge. He published his first novel, Medicine River (1990), shortly after moving to Canada. The novel received considerable praise and was runner up for the 1991 Commonwealth Writer’s Prize. As an author, King has published works of fiction, detective novels, and children’s literature, much of which depicts the lives and histories of Native people. His novel Green Grass, Running Water (1993) was nominated for a Governor General’s Award for fiction. The Inconvenient Indian: A Curious Account of Native People in North America (2012) won the 2014 RBC Taylor Prize. The conversational style King employs in The Inconvenient Indian, characteristic of much of his writing, illustrates his project of injecting elements of the oral tradition that is so important to indigenous culture into conventionally Western narrative structures. Outside of literature, King worked as story editor for Four Directions, a CBC television series about First Nations people, from 1993 to 1994. He is also involved in politics and activism. In 2007, he was announced as the New Democratic Party candidate for Guelph, Ontario, though he lost the election. In 2004, he became a Member of the Order of Canada. King is currently Professor Emeritus at the University of Guelph in the School of English and Theatre Studies Department.
Get the entire The Inconvenient Indian LitChart as a printable PDF.
"My students can't get enough of your charts and their results have gone through the roof." -Graham S.
Download 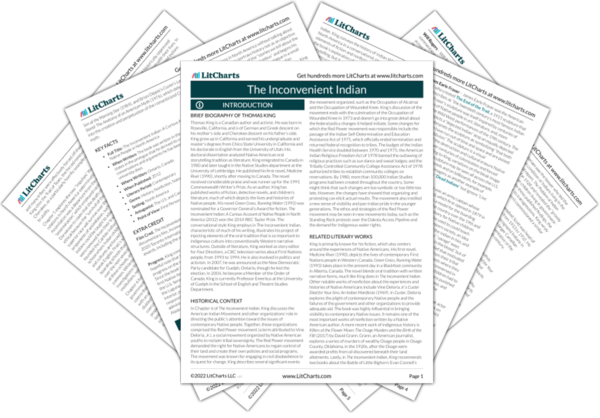 Historical Context of The Inconvenient Indian

In Chapter 6 of The Inconvenient Indian, King discusses the American Indian Movement and other organizations’ role in directing the public’s attention toward the issues of contemporary Native people. Together, these organizations comprised the Red Power movement (a term attributed to Vine Deloria, Jr.), a social movement organized by Native American youths to reclaim tribal sovereignty. The Red Power movement demanded the right for Native Americans to regain control of their land and create their own policies and social programs. The movement was known for engaging in civil disobedience in its quest for change. King describes several significant events the movement organized, such as the Occupation of Alcatraz and the Occupation of Wounded Knee. King’s discussion of the movement ends with the culmination of the Occupation of Wounded Knee in 1973 and doesn’t go into great detail about the federal policy changes it helped initiate. Some changes for which the Red Power movement was responsible include the passage of the Indian Self-Determination and Education Assistance Act of 1975, which officially ended termination and returned federal recognition to tribes. The budget of the Indian Health Service doubled between 1970 and 1975; the American Indian Religious Freedom Act of 1978 banned the outlawing of religious practices such as sun dance and sweat lodges; and the Tribally Controlled Community College Assistance Act of 1978 authorized tribes to establish community colleges on reservations. By 1980, more than 100,000 Indian Studies programs had been created throughout the country. Some might think that such changes are too symbolic or too little too late. However, the changes have showed that organizing and protesting can elicit actual results. The movement also instilled a new sense of visibility and pan-Indian pride in the younger generations. The ethos and strategies of the Red Power movement may be seen in new movements today, such as the Standing Rock protests over the Dakota Access Pipeline and the demand for Indigenous water rights.

Other Books Related to The Inconvenient Indian

King is primarily known for his fiction, which also centers around the experiences of Native Americans. His first novel, Medicine River (1990), depicts the lives of contemporary First Nations people in Western Canada. Green Grass, Running Water (1993) takes place in the present day in a Blackfoot community in Alberta, Canada. The novel blends oral tradition with written narrative forms, much like King does in The Inconvenient Indian. Other notable works of nonfiction about the experiences and histories of Native Americans include Vine Deloria Jr.’s Custer Died for Your Sins: An Indian Manifesto (1969). In Custer, Deloria explores the plight of contemporary Native people and the failures of the government and other organizations to provide adequate aid. The book was highly influential in bringing visibility to contemporary Native issues. It remains one of the most important works of nonfiction written by a Native American author. A more recent work of indigenous history is Killers of the Flower Moon: The Osage Murders and the Birth of the FBI (2017) by David Grann. Grann, an American journalist, explores a series of murders of wealthy Osage people in Osage County, Oklahoma, in the 1920s, after the Osage were awarded profits from oil discovered beneath their land allotments. Lastly, in The Inconvenient Indian, King recommends two books about the Battle of Little Bighorn: Evan Connell’s Son of the Morning Star (1984), and Brian Dippie’s Custer’s Last Stand: The Anatomy of an American Myth (1976), which delves into the creation and perpetuation of the romanticized Custer myth.
Key Facts about The Inconvenient Indian

Extra Credit for The Inconvenient Indian

Progress. King concludes The Inconvenient Indian on the hopeful note that Indians and Whites can continue to make progress on the issue of land ownership in North America. Since the book’s publication in 2012, the U.S. has appointed its first Native American to serve as a Cabinet secretary. In 2021, the U.S. Senate confirmed Deb Haaland, an enrolled member of the Laguna Pueblo tribe, to serve as the Secretary of the Interior, putting her in charge of the executive department responsible for the management of federal lands and the administration of federal programs for Native Americans, Alaska Natives, and Native Hawaiians. 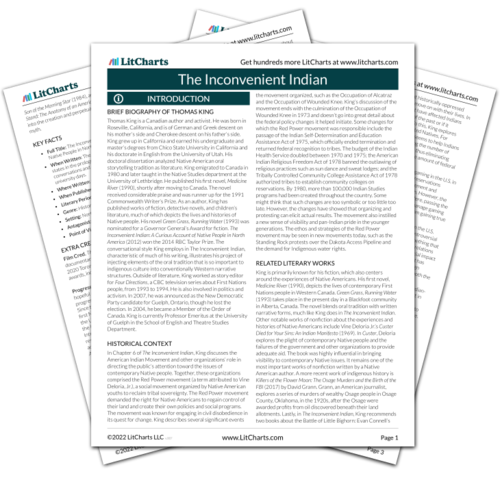 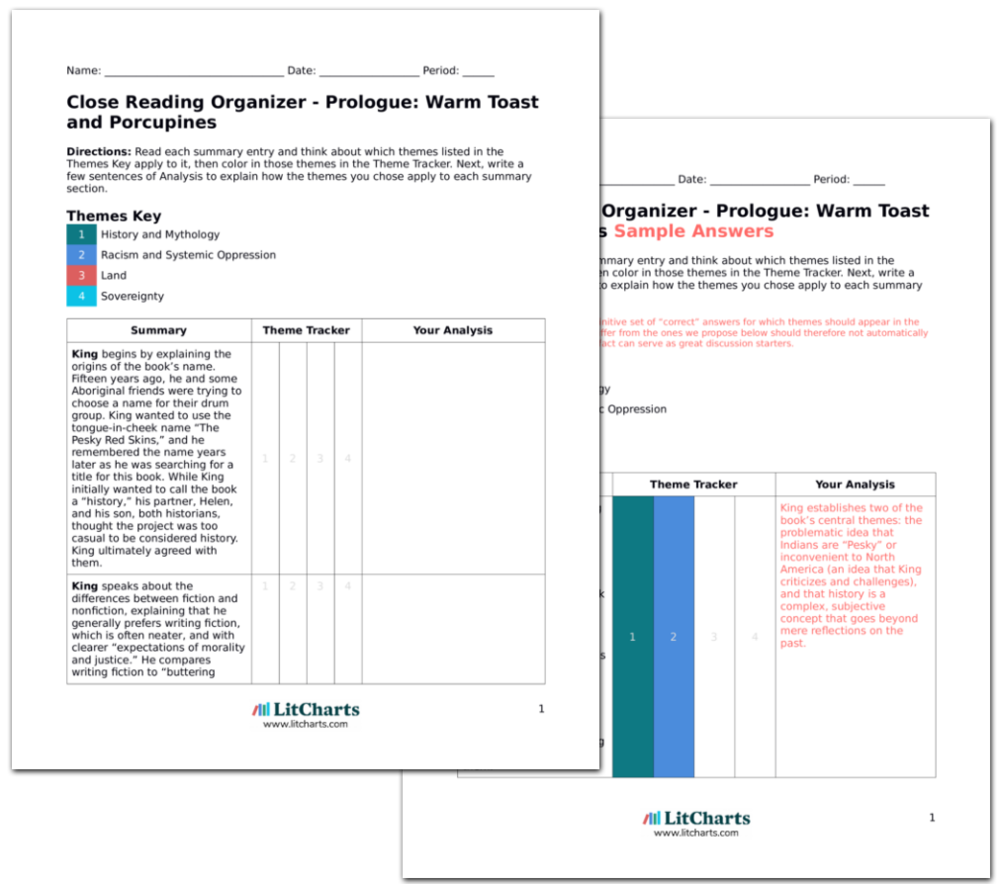