Download this LitChart! (PDF)
Teachers and parents! Struggling with distance learning? Our Teacher Edition on The Killers can help.

Welcome to the LitCharts study guide on Ernest Hemingway's The Killers. Created by the original team behind SparkNotes, LitCharts are the world's best literature guides.

A concise biography of Ernest Hemingway plus historical and literary context for The Killers.

A quick-reference summary: The Killers on a single page.

In-depth summary and analysis of every of The Killers. Visual theme-tracking, too.

Explanations, analysis, and visualizations of The Killers's themes.

The Killers's important quotes, sortable by theme, character, or .

Description, analysis, and timelines for The Killers's characters.

Explanations of The Killers's symbols, and tracking of where they appear.

An interactive data visualization of The Killers's plot and themes.

Ernest Hemingway was the second of six children born to Clarence and Grace Hemingway in Oak Park, Illinois. Clarence Hemingway often brought Ernest camping and hunting with him in rural Michigan, instilling in him a lifelong love of the outdoors. Hemingway played a number of sports in high school (including boxing and football) and enjoyed writing short stories for the school newspaper and magazine. In 1918, Hemingway joined the Red Cross and was sent to the Italian front during World War I. He was seriously injured and spent the rest of the war recuperating in Milan before returning to the United States. Hemingway famously spent much of the 1920s in Paris, falling in with a group of writers dubbed the “Lost Generation” by the poet Gertrude Stein. Hemingway’s short story collection In Our Time was published in 1925, resulting in almost overnight fame that continued to grow with the publication of his first novel, The Sun Also Rises, in 1926.  Hemingway’s love life was notoriously messy: he divorced his first wife, Hadley, for his mistress, Pauline; he divorced Pauline a few years later after meeting a journalist named Martha Gellhorn; and he divorced Martha after falling in love with Mary Welsh, who remained married to him until his death. Hemingway enjoyed decades of fame and fortune, but his fast-paced and unhealthy lifestyle combined with poor physical and mental health began to take its toll on his work and his personal life. In 1961, Hemingway died by suicide at his secluded home in Ketchum, Idaho. In his lifetime, Hemingway published seven short story collections, seven novels, and two works of nonfiction. Several more works, including The Garden of Eden and A Moveable Feast, were published posthumously.
Get the entire The Killers LitChart as a printable PDF.
"My students can't get enough of your charts and their results have gone through the roof." -Graham S.
Download 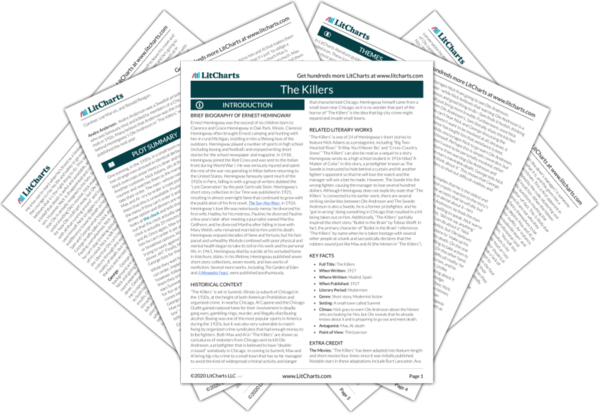 Historical Context of The Killers

“The Killers” is set in Summit, Illinois (a suburb of Chicago) in the 1920s, at the height of both American Prohibition and organized crime. In nearby Chicago, Al Capone and the Chicago Outfit gained national fame for their involvement in deadly gang wars, gambling rings, murder, and illegally distributing alcohol. Boxing was one of the most popular sports in America during the 1920s, but it was also very vulnerable to match fixing by organized crime syndicates that had enough money to bribe fighters. Both Max and Al in “The Killers” are shown as caricatures of mobsters from Chicago sent to kill Ole Andreson, a prizefighter that is believed to have “double-crossed” somebody in Chicago. In coming to Summit, Max and Al bring big-city crime to a small town that has so far managed to avoid the kind of widespread criminal activity and danger that characterized Chicago. Hemingway himself came from a small town near Chicago, so it is no wonder that part of the horror of “The Killers” is the idea that big-city crime might expand and invade small towns.

Other Books Related to The Killers

“The Killers” is one of 24 of Hemingway’s short stories to feature Nick Adams as a protagonist, including “Big Two-Hearted River,” “A Way You’ll Never Be,” and “Cross-Country Snow.” “The Killers” can also be read as a sequel to a story Hemingway wrote as a high school student in 1916 titled “A Matter of Color.” In this story, a prizefighter known as The Swede is instructed to hide behind a curtain and hit another fighter’s opponent so that he will lose the match and the manager will win a bet he made. However, The Swede hits the wrong fighter, causing the manager to lose several hundred dollars. Although Hemingway does not explicitly state that “The Killers” is connected to his earlier work, there are several striking similarities between Ole Andreson and The Swede: Andreson is also a Swede, he is a former prizefighter, and he “got in wrong” doing something in Chicago that resulted in a hit being taken out on him. Additionally, “The Killers” partially inspired the short story “Bullet in the Brain” by Tobias Wolff. In fact, the primary character of “Bullet in the Brain” references “The Killers” by name when he is taken hostage with several other people at a bank and sarcastically declares that the robbers sound just like Max and Al (the hitmen in “The Killers”).
Key Facts about The Killers

Extra Credit for The Killers

The Movies. “The Killers” has been adapted into feature-length and short movies four times since it was initially published. Notable stars in these adaptations include Burt Lancaster, Ava Gardner, Lee Marvin, and Ronald Reagan.

Andre Anderson.  Andre Anderson was a Swedish prizefighter who was famously shot and killed by members of a Chicago mob in 1926. Many believe that Anderson was the inspiration behind Hemingway’s Ole Andreson in “The Killers,” which was published the next year. 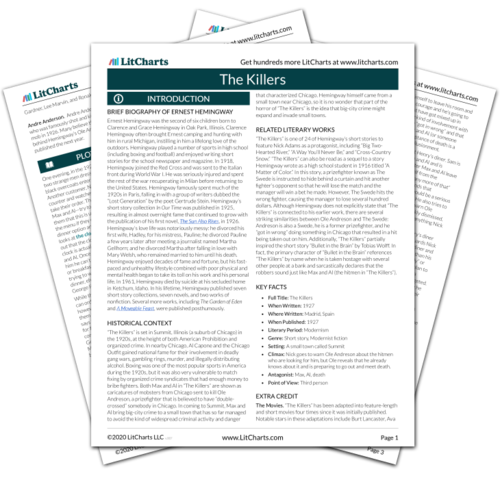 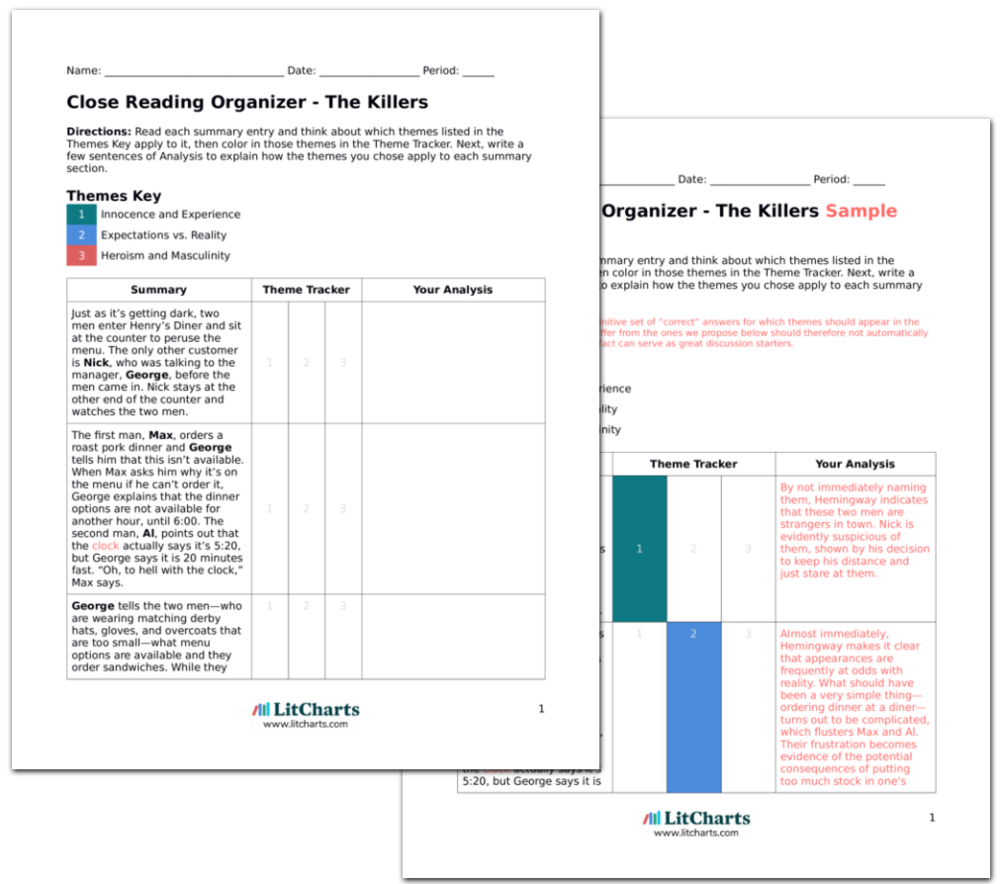