Download this LitChart! (PDF)
Teachers and parents! Struggling with distance learning? Our Teacher Edition on The Landlady can help.

Welcome to the LitCharts study guide on Roald Dahl's The Landlady. Created by the original team behind SparkNotes, LitCharts are the world's best literature guides.

A concise biography of Roald Dahl plus historical and literary context for The Landlady.

A quick-reference summary: The Landlady on a single page.

In-depth summary and analysis of every of The Landlady. Visual theme-tracking, too.

Explanations, analysis, and visualizations of The Landlady's themes.

The Landlady's important quotes, sortable by theme, character, or .

Description, analysis, and timelines for The Landlady's characters.

Explanations of The Landlady's symbols, and tracking of where they appear.

An interactive data visualization of The Landlady's plot and themes.

Dahl was born in Wales in 1916 to two Norwegian parents. He was their third child, and his father also had two children from his previous marriage. Tragedy struck in the family in 1920 when Dahl’s older sister, Astri, died of an infection. Astri had been their father’s favorite child, and he was heartbroken by her death. Shortly afterwards, Dahl’s father got pneumonia and he too died, leaving Dahl’s mother alone—in a foreign country—with six children in her care. Determined to honor her late husband’s wish for his children to receive an English education, she sent Dahl to school in Weston-super-Mare, England, in 1925. Dahl later attended a famous boarding school in Derby where he spent the rest of his school education. Dahl has written about his childhood experiences in great detail in his autobiography, Boy, in which he describes some of his schoolmasters’ cruelty. As a young adult, Dahl worked for Shell Oil, before enlisting in the Royal Air Force (RAF) at the beginning of World War II as a fighter pilot. In 1940 he suffered serious injuries after his plane crashed. After his accident, he could no longer fly, and was posted in Washington D.C., where he published his first piece of paid writing. Dahl spent the next two decades publishing adult fiction, and in 1961 he published his first children’s book, James and the Giant Peach. Dahl was often accused of having anti-Semitic beliefs, but despite this criticism, he continued to enjoy a successful writing career until his death in 1990.
Get the entire The Landlady LitChart as a printable PDF.
"My students can't get enough of your charts and their results have gone through the roof." -Graham S.
Download 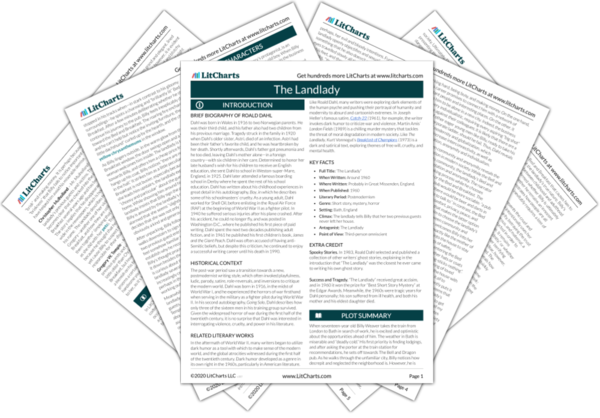 Historical Context of The Landlady

The post-war period saw a transition towards a new, postmodernist writing style, which often invoked playfulness, ludic, parody, satire, role-reversals, and inversions to critique the modern world. Dahl was born in 1916, in the midst of World War I, and he experienced the horrors of war firsthand when serving in the military as a fighter pilot during World War II. In his second autobiography, Going Solo, Dahl describes how only three of the sixteen men in his training group survived. Given the widespread horror of war during the first half of the twentieth century, it is no surprise that Dahl was interested in interrogating violence, cruelty, and power in his literature.

Other Books Related to The Landlady

In the aftermath of World War II, many writers began to utilize dark humor as a tool with which to make sense of the modern world, and the global atrocities witnessed during the first half of the twentieth century. Dark humor developed as a genre in its own right in the 1960s, particularly in American literature. Like Roald Dahl, many writers were exploring dark elements of the human psyche and pushing their portrayal of humanity and modernity to absurd and cartoonish extremes. In Joseph Heller’s famous satire, Catch-22 (1961), for example, the writer invokes dark humor to criticize war and violence. Martin Amis’ London Fields (1989) is a chilling murder mystery that tackles the threat of moral degradation in modern society. Like The Landlady, Kurt Vonnegut’s Breakfast of Champions (1973) is a dark and satirical text, exploring themes of free will, cruelty, and mental health.
Key Facts about The Landlady

Extra Credit for The Landlady

Spooky Stories. In 1983, Roald Dahl selected and published a collection of other writers’ ghost stories, explaining in the introduction that “The Landlady” was the closest he ever came to writing his own ghost story.

Success and Tragedy. “The Landlady” received great acclaim, and in 1960 it won the prize for “Best Short Story Mystery” at the Edgar Awards. Meanwhile, the 1960s were tragic years for Dahl personally; his son suffered from ill health, and both his mother and his eldest daughter died. 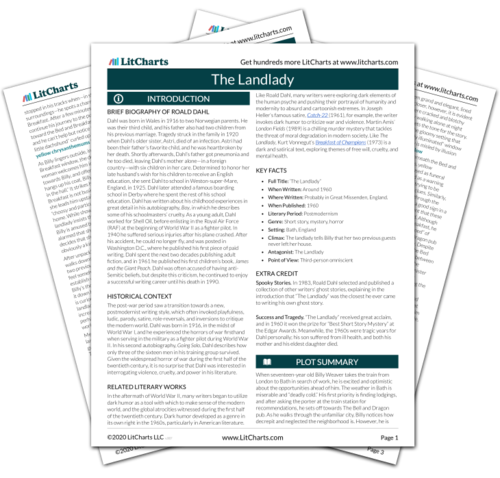 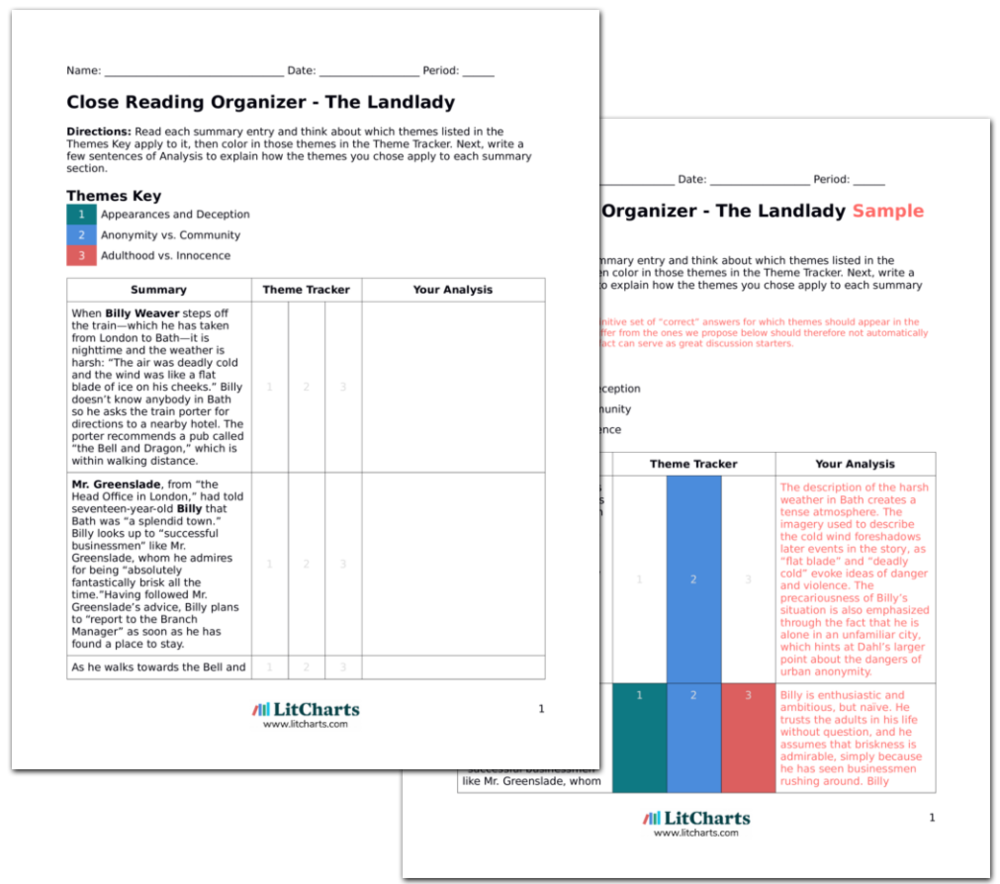