Franz, the little schoolboy who narrates Daudet’s “Last Lesson,” is a rather negligent pupil. He doesn’t keep up with his lessons, he doesn’t like his teacher, M. Hamel, and he’d prefer to be out roaming the woods of his native region of Alsace-Lorraine, France, rather than in the classroom. Yet the lesson he attends on the day the story is set changes his view of school forever. Franz learns the true value of his education when he realizes that school teaches him more than just proper grammar; it teaches him how to be a committed French citizen.

Franz doesn’t like going to school, and this is made clear in his consistent attempts to shirk his obligations. On the day the story is set, he considers skipping class to dawdle in the woods, particularly as he hasn’t learned the lesson on participles he was meant to memorize, and which he is to deliver before the class that very day. He is, furthermore, afraid of his school teacher, M. Hamel, who carries a “terrible” ruler under his arm with which he terrorizes his students. Franz seems to approach his schoolwork as pointless and unnecessary toil, finding many other things—such as hunting for birds’ nests or sliding on the river Saar—to be more worthy of his time.

However, the news that Prussian authorities—who have taken control of Alsace-Lorraine—have banned the teaching of the French language in schools, gives him a new perspective on his education. Upon learning from M. Hamel that this will be his last lesson in French, Franz comes to regret his negligence of his school responsibilities. He realizes that he does not yet even have a good grasp of the language he has taken for granted—he hardly knows how to write in French. He begins to see how valuable his schooling is in general. Even the things that had seemed such a nuisance to him before—such as his books—suddenly appear to him to be “old friends” that he can’t give up. As such, Franz’s newfound respect for his education points to his emerging awareness that his schooling equips him with immensely valuable knowledge, knowledge that extends much deeper than he had realized.

Indeed, during the lesson, Franz discerns that he as well as the rest of the villagers have made a mistake in neglecting their schooling, one which, in the face of foreign occupation, will now cost them. M. Hamel points out that his pupils’ parents have colluded in their children’s neglect of their education, preferring to send them out to work on farms or at the mills, for extra money. Franz notices that even the elders of the village, gathered at the back of the room, were “sorry […] that they had not gone to school more.” The villagers, therefore, have prioritized labor over education. This, under the present circumstances, comes to seem shortsighted. Neglecting their own and their children’s schooling in favor of work may have helped at the time, but ultimately it has robbed them and their children of the education necessary to hold on to their identities in the face of foreign conquest.

Franz’s last lesson is thus one that revolutionizes his own conception of his education. School, Franz learns, is about much more than memorizing boring grammar lessons—school also equips him with knowledge and values that are indispensable to his identity. While more shortsighted needs for work and play may have taken precedence in the village, the story ultimately suggests that it is only the identity instilled through education that has the power to save Franz and his community in times of danger.

The ThemeTracker below shows where, and to what degree, the theme of Education and Knowledge appears in each chapter of The Last Lesson. Click or tap on any chapter to read its Summary & Analysis.
How often theme appears:
chapter length:
Chapter
The Last Lesson
Get the entire The Last Lesson LitChart as a printable PDF.
"My students can't get enough of your charts and their results have gone through the roof." -Graham S.
Download 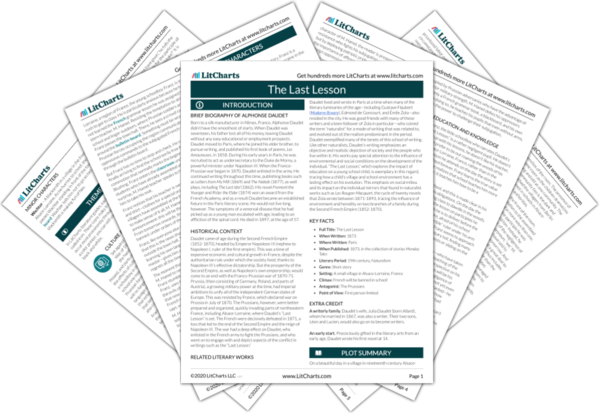 Education and Knowledge Quotes in The Last Lesson