In Ray Bradbury’s short story “The Last Night of the World,” set in 1969, a husband and wife talk over coffee about a mysterious dream they each had, which announced that the world would end sometime that night. At first, the woman is fearful—as seen by her denial and anxious speculation—which hinders her from being able to accept reality. However, once she finally faces the circumstances and is honest with herself and her husband about her own apocalyptic dream, the woman is able to let go of her fear and face the impending end with bravery and poise. Using the husband and wife as examples, the short story asserts that bravery doesn’t have to be big and bold. Instead, bravery can simply be a calm acceptance of one’s fate.

The short story shows that fear, often marked by speculation and denial, keeps people from fully facing the situation at hand. Even though the woman has already had the same end-of-the-world dream as her husband (and seemingly every other adult on Earth), she still pleads ignorance when her husband abruptly asks her one night what she would do if she knew it was “the last night of the world.” Bewildered, she answers, “What would I do? You mean seriously? […] I don’t know. I hadn’t thought.” It seems that the woman is too fearful to admit the reality of the situation, which consequently stalls her conversation with her husband and keeps them from speaking openly with one another. When the woman realizes that her husband is serious about the end of the world, she turns to speculation, asking if the world is ending because of war, “the hydrogen or atom bomb,” or “germ warfare.” Because she’s fearful and in denial about her apocalyptic dream, she anxiously turns to other explanations for why the world might be ending. Of course, this is largely unhelpful, and her speculation keeps her from having an honest, open conversation with her husband about the reality at hand.

Only when one acknowledges the reality of their situation, the story suggests, can their turn fear into bravery. At work, the man notices his coworker Stan Willis gazing out the window, with something clearly troubling him. Stan opens up about his dream, and when the man admits that he had the same dream the night before, Stan “didn’t seem surprised. He relaxed, in fact.” By affirming that he had the same dream, the man confirms the reality of the situation. This confirmation allows Stan to let go of the anxiety and speculation he was presumably experiencing while staring out the window. A few days later, when the man asks his wife why she’s not protesting to his claims that the world will end that night, she hesitantly reveals that she also had the same dream the night before, but she “didn’t want to say anything.” Her reluctance to speak openly about the end of the world illustrates her fear, but now that she has finally accepted the circumstances, she and her husband can figure out how to bravely face their fate. Once the woman opens up about her dream, the man asks her if she’s scared. She replies, “No. I always thought I would be, but I’m not.” It seems that letting go of her denial and fear allowed the woman to realize that she is capable of extraordinary bravery. The man wonders why people aren’t “screaming in the streets at a time like this,” but his wife points out that people “don’t scream about the real thing.” Once again, her comment shows how acknowledging reality—realizing this is “the real thing”—leads to bravery.

However, the story is quick to point out that bravery doesn’t have to mean being loud and bold. Being brave can mean being calm in the face of a terrifying situation. For example, the man thinks that most people will spend their last night “like always” by watching television, listening to music, playing card games, and putting themselves and their children to bed—the same way the husband and wife spend their last night. His wife suggests, “In a way that’s something to be proud of—like always.” The woman points out that for many people, staying calm and committed to normalcy is actually a major act of bravery because it takes significant strength and poise. Similarly, in what are presumably their last moments, the husband and wife simply lie in bed holding hands and say “Good night” to one another. The story cuts off at this moment and possibly the world does too. The couple’s final words are simple but significant, as they courageously say goodnight and goodbye to one another without traces of anxiety, fear, denial, or speculation. Their simple goodbyes bravely mirror the husband’s earlier claim that the end of the world will not be violent or intense—instead, it will be like “the closing of a book.” 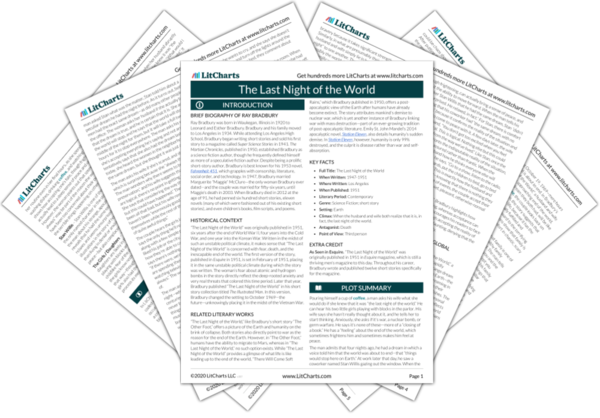 Fear and Bravery Quotes in The Last Night of the World