Download this LitChart! (PDF)
Teachers and parents! Struggling with distance learning? Our Teacher Edition on The Latehomecomer can help.

Welcome to the LitCharts study guide on Kao Kalia Yang's The Latehomecomer. Created by the original team behind SparkNotes, LitCharts are the world's best literature guides.

A concise biography of Kao Kalia Yang plus historical and literary context for The Latehomecomer.

A quick-reference summary: The Latehomecomer on a single page.

In-depth summary and analysis of every chapter of The Latehomecomer. Visual theme-tracking, too.

Explanations, analysis, and visualizations of The Latehomecomer's themes.

The Latehomecomer's important quotes, sortable by theme, character, or chapter.

Description, analysis, and timelines for The Latehomecomer's characters.

Explanations of The Latehomecomer's symbols, and tracking of where they appear.

An interactive data visualization of The Latehomecomer's plot and themes.

Kao Kalia Yang is a Hmong American immigrant. Her memoir, The Latehomecomer, captures much of her life story. Yang’s family fled genocide in Laos after the Vietnam War and spent several years in various Thai refugee camps. Her older sister was born in Laos (when Yang’s mother was held captive by Pathet Lao soldiers), and Yang was born a year later in Ban Vinai Refugee Camp. When Yang was six years old, her family emigrated to the United States, and she describes her immigrant childhood as a stressful and financially strained time. Despite struggling with learning and speaking English, Yang discovered that she had an aptitude for writing. She completed a Bachelor’s degree in American studies, women’s and gender studies, and cross-cultural studies from Carleton College in 2003, before completing graduate studies at Columbia University. Her debut book, The Latehomecomer, was published in 2008. She has since published two additional memoirs and several children’s books.
Get the entire The Latehomecomer LitChart as a printable PDF.
"My students can't get enough of your charts and their results have gone through the roof." -Graham S.
Download 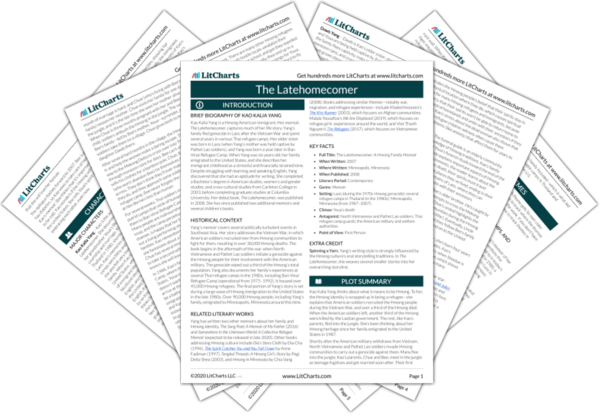 Historical Context of The Latehomecomer

Yang’s memoir covers several politically turbulent events in Southeast Asia. Her story addresses the Vietnam War, in which American soldiers recruited men from Hmong communities to fight for them, resulting in over 30,000 Hmong deaths. The book begins in the aftermath of the war, when North Vietnamese and Pathet Lao soldiers initiate a genocide against the Hmong people for their involvement with the American military. The genocide wiped out a third of the Hmong’s total population. Yang also documents her family’s experiences at several Thai refugee camps in the 1980s, including Ban Vinai Refugee Camp (operational from 1975–1992). It housed over 45,000 Hmong refugees. The final portion of Yang’s story is set during a large wave of Hmong immigration to the United States in the late 1980s. Over 90,000 Hmong people, including Yang’s family, emigrated to Minneapolis, Minnesota around this time.

Other Books Related to The Latehomecomer

Yang has written two other memoirs about her family and Hmong identity, The Song Poet: A Memoir of My Father (2016) and Somewhere in the Unknown World: A Collective Refugee Memoir (expected to be released in late 2020). Other books addressing Hmong culture include Dia’s Story Cloth by Dia Cha (1996), The Spirit Catches You and You Fall Down by Anne Fadiman (1997), Tangled Threads: A Hmong Girl’s Story by Pegi Deitz Shea (2003), and Hmong in Minnesota by Chia Vang (2008). Books addressing similar themes—notably war, migration, and refugee experiences—include Khaled Hosseini’s The Kite Runner (2003), which focuses on Afghan communities; Malala Yousafzai’s We Are Displaced (2019), which focuses on refugee girls’ experiences around the world; and Viet Thanh Nguyen’s The Refugees (2017), which focuses on Vietnamese communities.
Key Facts about The Latehomecomer

Extra Credit for The Latehomecomer

Spinning a Yarn. Yang’s writing style is strongly influenced by the Hmong culture’s oral storytelling traditions. In The Latehomecomer, she weaves several smaller stories into her overarching storyline. 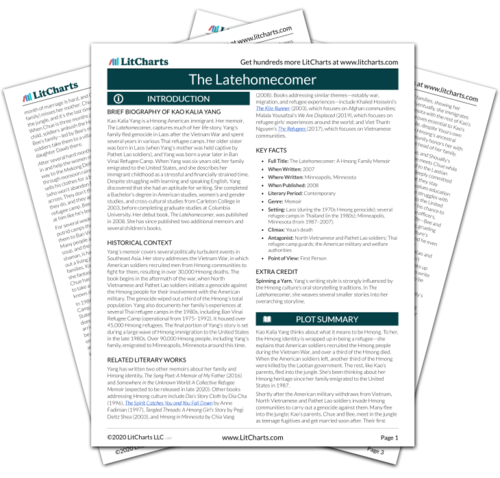 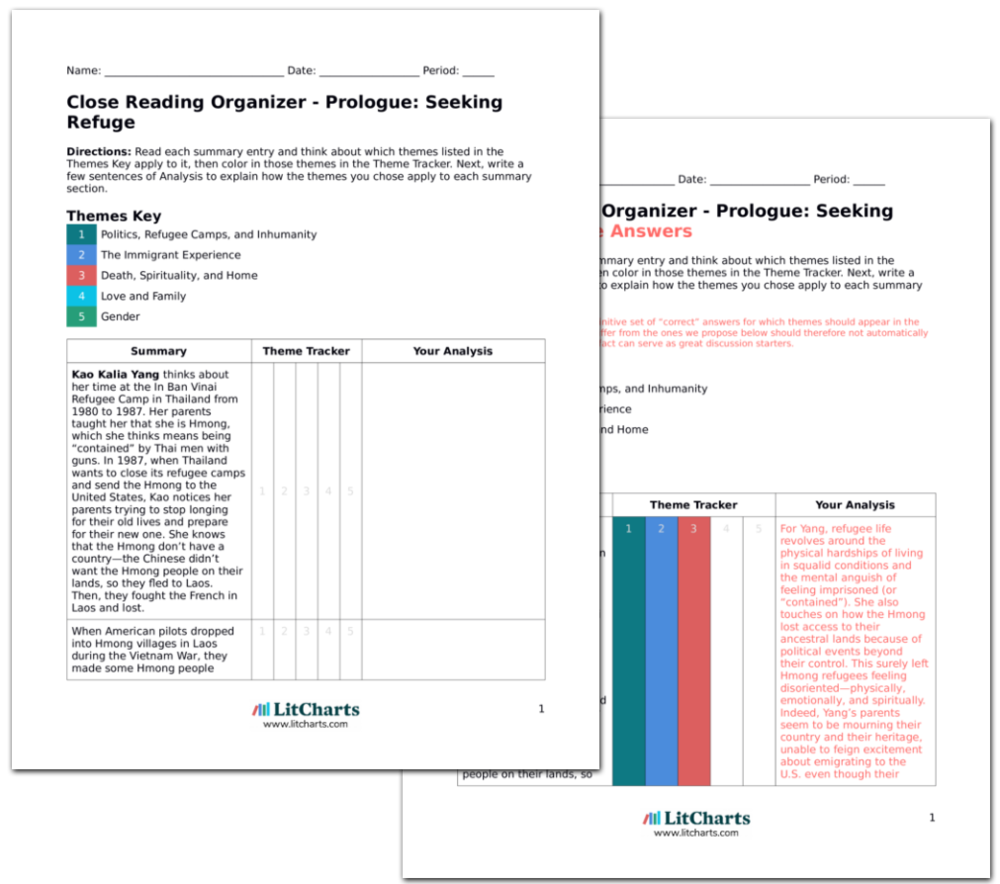