Download this LitChart! (PDF)
Teachers and parents! Struggling with distance learning? Our Teacher Edition on The Lemon Orchard can help.

Welcome to the LitCharts study guide on Alex La Guma's The Lemon Orchard. Created by the original team behind SparkNotes, LitCharts are the world's best literature guides.

A concise biography of Alex La Guma plus historical and literary context for The Lemon Orchard.

A quick-reference summary: The Lemon Orchard on a single page.

In-depth summary and analysis of every of The Lemon Orchard. Visual theme-tracking, too.

Explanations, analysis, and visualizations of The Lemon Orchard's themes.

The Lemon Orchard's important quotes, sortable by theme, character, or .

Description, analysis, and timelines for The Lemon Orchard's characters.

Explanations of The Lemon Orchard's symbols, and tracking of where they appear.

An interactive data visualization of The Lemon Orchard's plot and themes.

Born in Cape Town, South Africa, La Guma was the son of James La Guma, who held leadership positions in the Industrial and Commercial Workers’ Union and the South African Communist Party. After graduating technical school in 1945, La Guma belonged to the Plant Workers Union of the Metal Box Company before being fired for leading a strike. This experience led him to become involved in politics, joining the Young Communists League in 1947 and the South African Communist Party in 1948. In 1956, during South African apartheid, La Guma aided in organizing the Freedom Charter, a statement that advocated for equal rights for all races, a democratic voting process, and wealth redistribution, among other policies. This led to him, along with 156 others, being arrested and tried for treason (though they were eventually found not guilty). La Guma published his first short story, “Nocturn,” in 1957. A few years later he began writing for a progressive newspaper, which was also considered a subversive act—in 1962, he and his wife, Blanche, were imprisoned in solitary confinement and then placed under house arrest. That same year, La Guma published A Walk in the Night, the collection in which “The Lemon Orchard” first appeared. La Guma and his family moved to the U.K. in 1966, and La Guma spent the rest of his life living in exile. He continued writing short stories and novels throughout the 1960s and 70s, winning the Lotus Prize for Literature in 1969. La Guma eventually became chief representative of the African National Congress in the Caribbean, a role he held until his death from a heart attack in 1985.
Get the entire The Lemon Orchard LitChart as a printable PDF.
"My students can't get enough of your charts and their results have gone through the roof." -Graham S.
Download 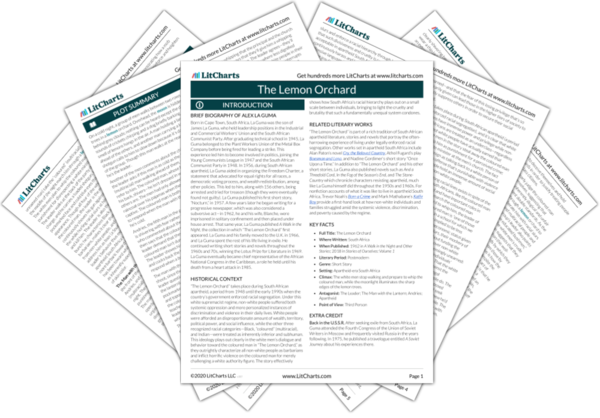 Historical Context of The Lemon Orchard

“The Lemon Orchard” takes place during South African apartheid, a period from 1948 until the early 1990s when the country’s government enforced racial segregation. Under this white supremacist regime, non-white people suffered both systemic oppression and more personalized instances of discrimination and violence in their daily lives. White people were afforded an disproportionate amount of wealth, territory, political power, and social influence, while the other three recognized racial categories—Black, “coloured” (multiracial), and Indian—were treated as inherently inferior and subhuman. This ideology plays out clearly in the white men’s dialogue and behavior toward the coloured man in “The Lemon Orchard,” as they outrightly characterize all non-white people as barbarians and inflict horrific violence on the coloured man for merely challenging a white authority figure. The story effectively shows how South Africa’s racial hierarchy plays out on a small scale between individuals, bringing to light the cruelty and brutality that such a fundamentally unequal system condones.

Other Books Related to The Lemon Orchard

“The Lemon Orchard” is part of a rich tradition of South African apartheid literature, stories and novels that portray the often-harrowing experience of living under legally enforced racial segregation. Other works set in apartheid South Africa include Alan Paton’s novel Cry, the Beloved Country, Athol Fugard’s play Boesman and Lena, and Nadine Gordimer’s short story “Once Upon a Time.” In addition to “The Lemon Orchard” and his other short stories, La Guma also published novels such as And a Threefold Cord, In the Fog of the Season’s End, and The Stone-Country which chronicle characters resisting apartheid, much like La Guma himself did throughout the 1950s and 1960s. For nonfiction accounts of what it was like to live in apartheid South Africa, Trevor Noah’s Born a Crime and Mark Mathabane’s Kaffir Boy provide a first-hand look at how non-white individuals and families struggled amid the systemic violence, discrimination, and poverty caused by the regime.
Key Facts about The Lemon Orchard

Extra Credit for The Lemon Orchard

Back in the U.S.S.R. After seeking exile from South Africa, La Guma attended the Fourth Congress of the Union of Soviet Writers in Moscow and frequently visited Russia in the years following. In 1975, he published a travelogue entitled A Soviet Journey about his experiences there. 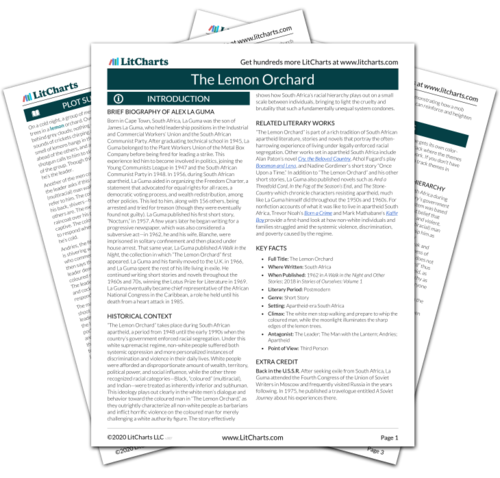 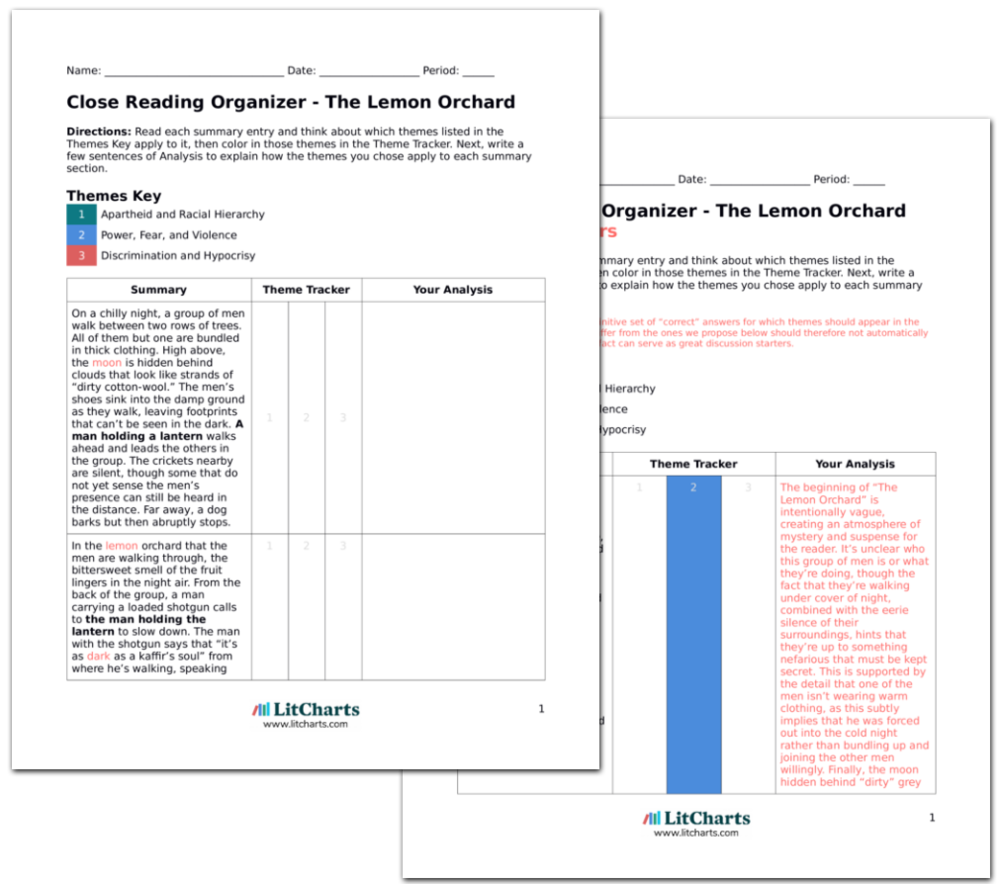