Download this LitChart! (PDF)
Teachers and parents! Struggling with distance learning? Our Teacher Edition on The Leopard can help.

Welcome to the LitCharts study guide on Giuseppe Di Lampedusa's The Leopard. Created by the original team behind SparkNotes, LitCharts are the world's best literature guides.

A concise biography of Giuseppe Di Lampedusa plus historical and literary context for The Leopard.

A quick-reference summary: The Leopard on a single page.

In-depth summary and analysis of every chapter of The Leopard. Visual theme-tracking, too.

Explanations, analysis, and visualizations of The Leopard's themes.

The Leopard's important quotes, sortable by theme, character, or chapter.

Description, analysis, and timelines for The Leopard's characters.

Explanations of The Leopard's symbols, and tracking of where they appear.

An interactive data visualization of The Leopard's plot and themes.

Giuseppe di Lampedusa was a member of the Sicilian nobility—the last Prince of Lampedusa. This title traced back to the 17th century, when it was first granted to Lampedusa’s ancestor by Charles II of Spain. Giuseppe grew up an only child who was strongly influenced by his mother and grandmother. Lampedusa was multilingual and well-read, and he was especially fond of French literature. After studying briefly in Rome, Lampedusa was drafted to fight in World War I, during which he spent time as a prisoner of war in Hungary. All his life, he was known for preferring solitude, except for the company of his beloved wife,  Alexandra “Licy” von Wolff-Stomersee, a Baltic German noblewoman. Lampedusa thought about The Leopard for 25 years, basing the novel on his great-grandfather, who lived during Garibaldi’s period. However, he didn’t start writing it until he was 60, finishing it only a few months before he died. Lampedusa was spurred to write in part by the Allied invasion during World War II, during which the Lampedusa palace in Palermo was damaged, a grievous event in his life. At the time of his death, Lampedusa had been told that his book was not publishable. Though he had no children, Lampedusa had adopted a young cousin of whom he was especially fond, Gioacchino Lanza Tomasi, who assisted in finally getting The Leopard published after Lampedusa’s death.
Get the entire The Leopard LitChart as a printable PDF.
"My students can't get enough of your charts and their results have gone through the roof." -Graham S.
Download 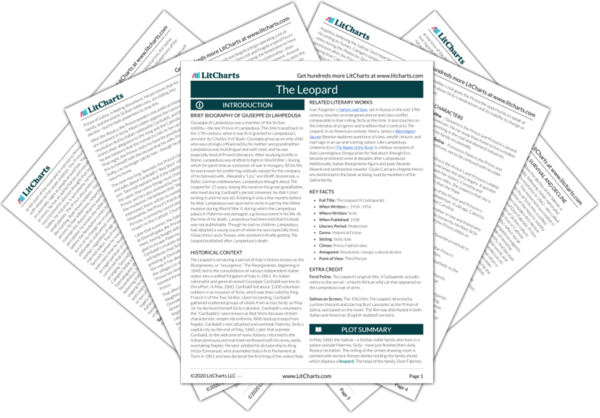 Historical Context of The Leopard

The Leopard is set during a period of Italy’s history known as the Risorgimento, or “resurgence.” The Risorgimento, beginning in 1848, led to the consolidation of various independent Italian states into a unified Kingdom of Italy in 1861. An Italian nationalist and general named Giuseppe Garibaldi was key to this effort. In May, 1860, Garibaldi led about 1,000 volunteer soldiers in an invasion of Sicily, which was then ruled by King Francis II of the Two Sicilies. Upon his landing, Garibaldi gathered scattered groups of rebels from across Sicily; on May 14, he declared himself Sicily’s dictator. Garibaldi’s volunteers, the “Garibaldini,” were known as Red Shirts because of their characteristic simple red uniforms. With backup troops from Naples, Garibaldi’s men attacked and overtook Palermo, Sicily’s capital city, by the end of May, 1860. Later that summer, Garibaldi, to the welcome of many Italians, returned to the Italian peninsula and marched northward with his army, easily overtaking Naples. He later yielded his dictatorship to King Victor Emmanuel, who assembled Italy’s first Parliament at Turin in 1861 and was declared the first king of the united Italy.

Other Books Related to The Leopard

Ivan Turgenev’s Fathers and Sons, set in Russia in the mid-19th century, touches on intergenerational and class conflict comparable to that roiling Sicily at the time. It also touches on the interplay of progress and tradition that’s central to The Leopard. In an American context, Henry James’s Washington Square likewise explores questions of class, wealth, leisure, and marriage in an up-and-coming nation. Like Lampedusa, Umberto Eco (The Name of the Rose) is a fellow recipient of Italy’s prestigious Strega prize for literature (though Eco became prominent several decades after Lampedusa). Additionally, Italian Risorgimento figure and poet Aleardo Aleardi and sentimental novelist  Giulio Carcano (Angiola Maria) are mentioned in the book as being read by members of the Salina family.
Key Facts about The Leopard

Extra Credit for The Leopard

Salinas on Screen. The 1963 film The Leopard, directed by Luchino Visconti and starring Burt Lancaster as the Prince of Salina, was based on the novel. The film was distributed in both Italian and American (English-dubbed) versions. 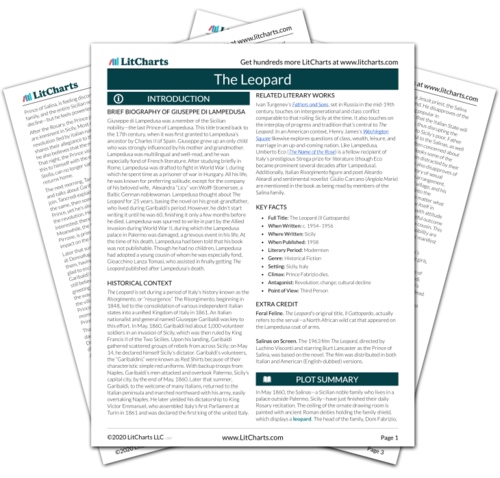 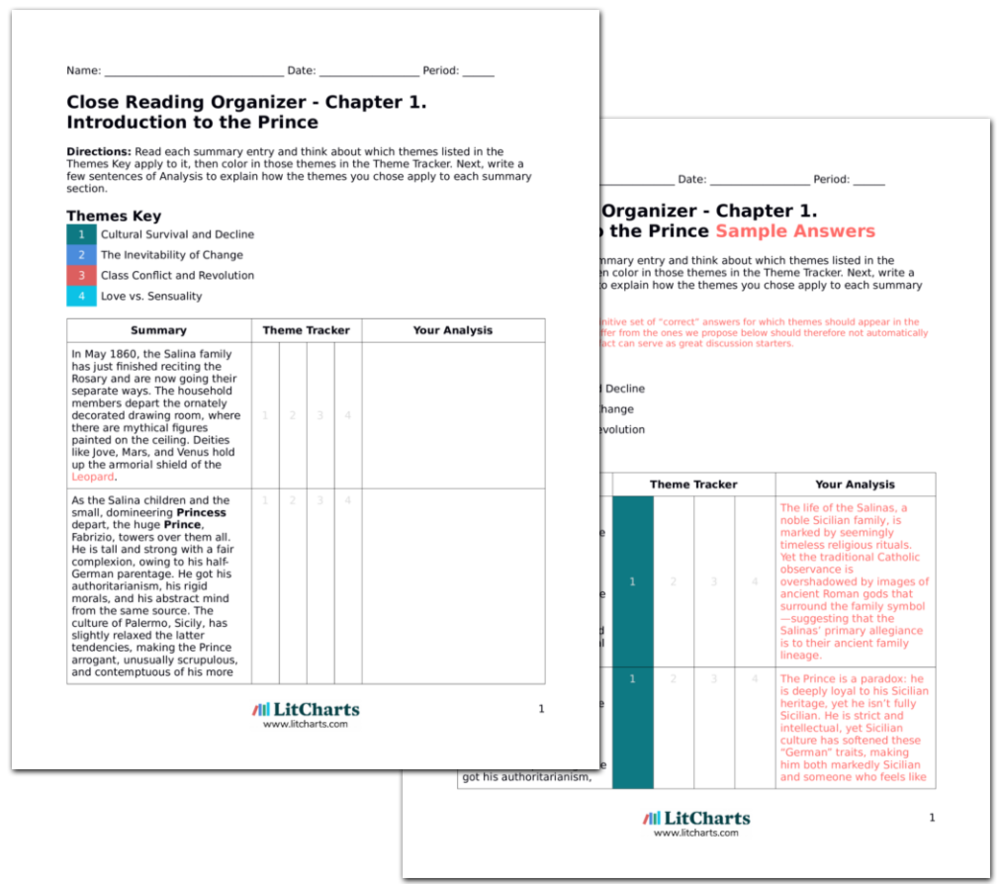