Download this LitChart! (PDF)
Teachers and parents! Struggling with distance learning? Our Teacher Edition on The Lightning Thief can help.

Get LitCharts A+
Luke is an older teen at Camp Half-Blood. His father, Hermes, claimed Luke, so Luke is now the leader of the Hermes cabin. Though Luke seems genuinely interested in taking care of the many younger kids who wind up in his cabin, he’s also generally disillusioned with camp and life as a young demigod. He feels abandoned by Hermes and never mentions his mother, but he seems to have few connections to blood family members and struggles because of this. Luke ended up at Camp Half-Blood with Thalia and young Annabeth, and Annabeth has had a crush on Luke ever since. He’s also quite handsome and skilled with a sword. His skills earned him a quest several years ago. Though this means that many campers revere and admire Luke, Luke thinks little of his quest—he repeated Hercules’s quest to steal a golden apple from the Garden of the Hesperides, and the experience got him nothing but a pat on the back as far as he’s concerned. Though Luke becomes a caring mentor to Percy during Percy’s time at camp and even gives Percy a seemingly useful parting gift of winged tennis shoes, Percy later discovers that Luke is a double agent. Luke’s loneliness, angst, and disillusionment with gods and with his father made Luke a prime target for the imprisoned Titan Kronos, who seeks to rise to power again and overthrow the gods. In Luke’s opinion, the gods have done nothing but condemn him to a life of loneliness, danger, and sorrow as a pawn, so he feels he has every reason to overthrow them. Percy discovers this when Luke makes an attempt to kill him with a poisonous pit scorpion on the last day before summer campers leave. Luke’s betrayal hits everyone hard, but Percy and Annabeth vow to track down Luke when they return to camp next summer.

Luke Quotes in The Lightning Thief

The The Lightning Thief quotes below are all either spoken by Luke or refer to Luke. For each quote, you can also see the other characters and themes related to it (each theme is indicated by its own dot and icon, like this one:

“Exactly,” Luke said. “Where’s the glory in repeating what others have done? [...] and when I came back, all I got was pity. I wanted to pull Olympus down stone by stone right then, but I bided my time. I began to dream of Kronos.”

Get the entire The Lightning Thief LitChart as a printable PDF.
"My students can't get enough of your charts and their results have gone through the roof." -Graham S.
Download 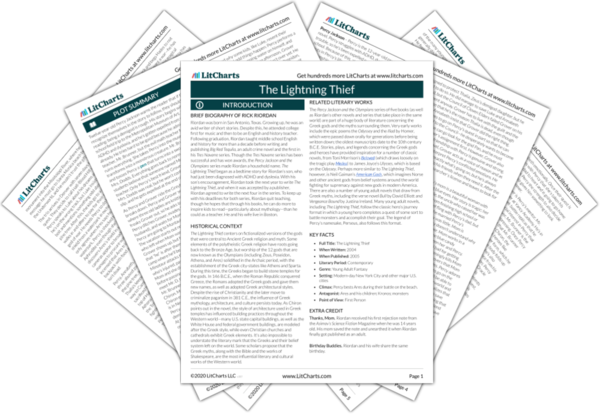 The timeline below shows where the character Luke appears in The Lightning Thief. The colored dots and icons indicate which themes are associated with that appearance.

...as “undetermined,” and a kind-looking blond boy with an unsettling scar on his face named Luke greets Percy. Annabeth blushes and says that Luke will be Percy’s counselor for now in... (full context)

...fits. They all toast the gods, and then wood nymphs carry out platters of food. Luke tells Percy to tell his glass what he wants to drink. Percy asks for blue... (full context)

...real, there must be a way to bring her back. He also begins to understand Luke’s resentment of Hermes. Percy wonders why his dad can’t just conjure a phone and call. (full context)

The Hermes cabin meets Luke for a sword-fighting lesson. Percy does okay, but none of the blades feel right. Luke... (full context)

...Annabeth carries in a huge, gray banner, while Clarisse presents a red one. Percy finds Luke and asks whose side they’re on. Luke says that tonight, they’re allied with Athena, along... (full context)

...fights off Clarisse’s friends, and then snaps Clarisse’s spear and hits her in the face. Luke races past with the Ares flag, which turns silver once Luke crosses the creek. (full context)

...but the creature leaps at him. It falls dead from a dozen arrows. Everyone ignores Luke and the Athena team’s victory. Chiron trots up and says that someone must’ve summoned the... (full context)

...to fit in. Many kids seem afraid of him. He has one-on-one sword lessons with Luke, and Annabeth seems irritable and annoyed during their Greek lessons. One night, Percy discovers a... (full context)

...the trio and introduces Argus, the head of security with eyes all over his body. Luke races up the hill to give Percy a pair of tennis shoes, which he says... (full context)

...rainbow, Annabeth tosses a drachma into the rainbow and requests Half-Blood Hill. They can see Luke at the railing. Luke grins but says that Chiron is at the cabins; they’re having... (full context)

Alone with Percy, Luke shouts that there have been fights because the campers are taking sides; it’s like the... (full context)

...Arachne, and Annabeth confirms this. Percy reminds her that they’re a team. Annabeth asks if Luke really said nothing in the Iris message. After a minute, Percy relays what Luke said... (full context)

...water and successfully evades Ares’s stabs, but Riptide is shorter than Ares’s sword. Percy remembers Luke’s advice to get in closer, but Ares knocks Riptide away and kicks Percy 30 feet... (full context)

Annabeth, Percy, and Grover are the first heroes to return alive to Half-Blood Hill since Luke, so they participate in a traditional feast and burn the burial shrouds that the other... (full context)

Percy decides to do some sword practice to clear his head. He finds Luke in the arena, whacking on dummies like his life depends on it. Percy watches in... (full context)

There are no monsters around, so Percy and Luke settle in by the creek. They talk about whether Percy misses his quest, and Luke... (full context)

The scorpion fixes its eyes on Percy as it climbs up his leg. Luke asks Percy if he felt the darkness and realized how useless it is to be... (full context)

Percy asks why Luke didn’t take the items to Kronos. Luke says that he got overconfident and that Ares... (full context)

Luke disappears as the scorpion lunges. Percy smacks at it and then cuts it in half... (full context) 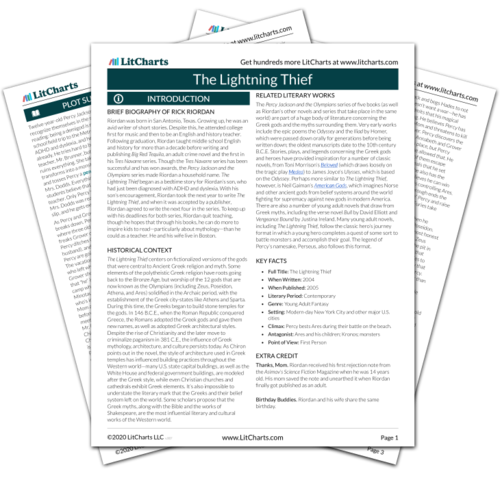 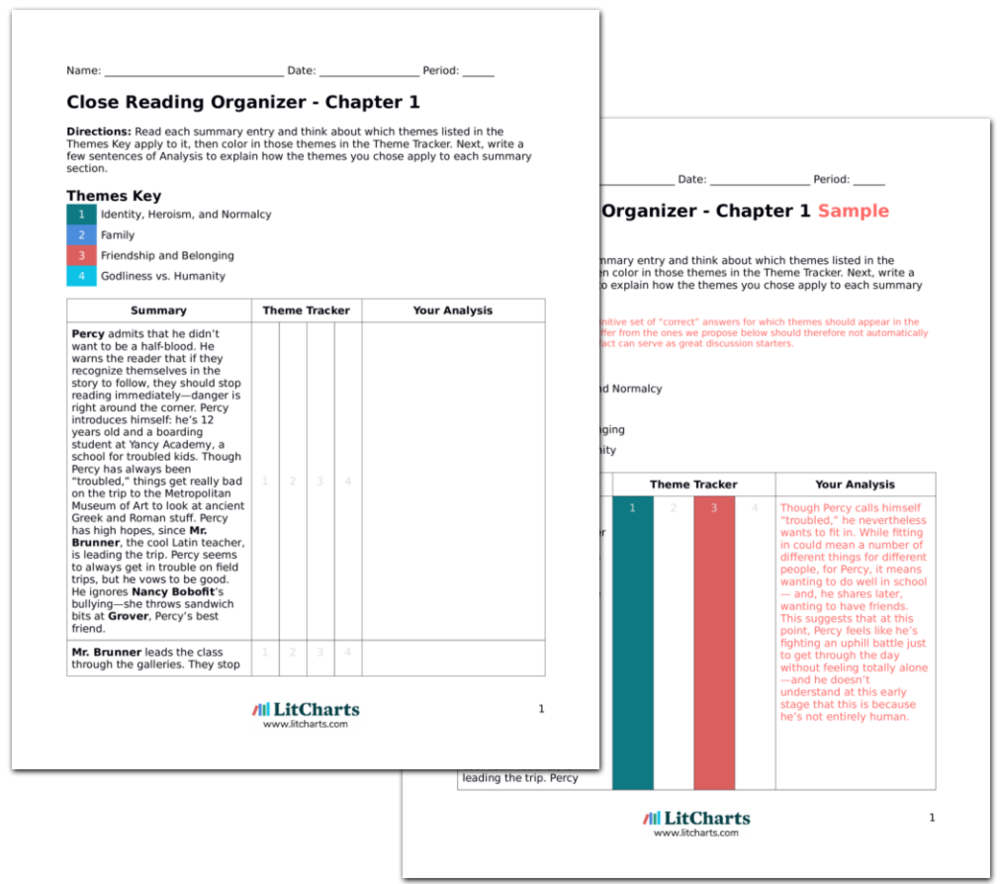