Download this LitChart! (PDF)
Teachers and parents! Struggling with distance learning? Our Teacher Edition on The Lion, the Witch and the Wardrobe can help.

In The Lion, the Witch, and the Wardrobe, Father Christmas symbolizes the benevolence and bounty Christianity has to offer. Lucy’s first friend in Narnia—a Faun named Mr. Tumnus—tells her that because the evil White Witch placed herself on the throne, it is “always winter but never Christmas” in Narnia. In a book whose central thematic preoccupation is Christianity, the forever-winter the White Witch has imposed on Narnia can be seen as the spiritual impoverishment and literal winter of the soul that estrangement from Christianity engenders. The cold is brutal and debilitating, but as the true King of Narnia, Aslan, approaches the land, the snow begins to thaw. On their way to meet up with Aslan, the children run into Father Christmas; he has come bearing presents for the Beavers, as well as Lucy, Susan, and Peter. The gifts he gives the three siblings are not mere toys, but “tools” that he urges them to use in the upcoming battle against the Witch. Here, Lewis is demonstrating how Christianity, which is the essence of goodness and benevolence, also equips its adherents with “tools” needed to traverse the world and battle temptation, cruelty, and evil. As Father Christmas departs, he wishes all the children a Merry Christmas—and then calls out, “Long live the true King.” Though Father Christmas in this instance is referring to Aslan, the true King of Narnia, his words undeniably echo Christians’ belief in Jesus Christ as the one true King, and the ultimate deliverer of his followers from sin and evil.

Father Christmas Quotes in The Lion, the Witch and the Wardrobe

The The Lion, the Witch and the Wardrobe quotes below all refer to the symbol of Father Christmas. For each quote, you can also see the other characters and themes related to it (each theme is indicated by its own dot and icon, like this one:

). Note: all page numbers and citation info for the quotes below refer to the HarperCollins edition of The Lion, the Witch and the Wardrobe published in 1950.
Chapter 10 Quotes

“Come on!” cried Mr. Beaver, who was almost dancing with delight. “Come and see! This is a nasty knock for the Witch! It looks as if her power is already crumbling.”

It was a sledge, and it was reindeer with bells on their harness. […] And on the sledge sat a person whom everyone knew the moment they set eyes on him. He was a huge man in a bright red robe (bright as hollyberries) with a hood that had fur inside it and a great white beard that fell like a foamy waterfall over his chest. Everyone knew him because, though you see people of his sort only in Narnia, you see pictures of them and hear them talked about even in our world—the world on this side of the wardrobe door. But when you really see them in Narnia it is rather different. Some of the pictures of Father Christmas in our world make him look only funny and jolly. But now that the children actually stood looking at him they didn't find it quite like that. He was so big, and so glad, and so real, that they all became quite still. They felt very glad, but also solemn.

“I've come at last,” said he. “She has kept me out for a long time, but I have got in at last. Aslan is on the move. The Witch's magic is weakening.”

Get the entire The Lion, the Witch and the Wardrobe LitChart as a printable PDF.
"My students can't get enough of your charts and their results have gone through the roof." -Graham S.
Download 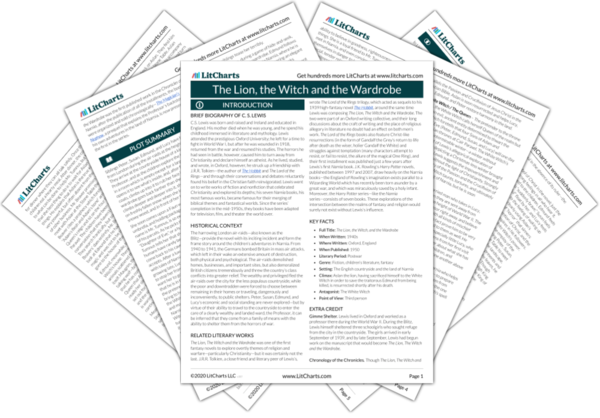 Father Christmas Symbol Timeline in The Lion, the Witch and the Wardrobe

The timeline below shows where the symbol Father Christmas appears in The Lion, the Witch and the Wardrobe. The colored dots and icons indicate which themes are associated with that appearance.

...is a sledge pulled by reindeer—it is not the Witch’s sledge, though, but that of Father Christmas . He rejoices that he has at last gotten into Narnia—the Witch’s magic, he says,... (full context)

Father Christmas delivers presents to the Beavers—he has a sewing machine for Mrs. Beaver, and he tells... (full context)

...and how they got their hands on such delicious food; the fox timidly answers that Father Christmas gave it to them. The Witch, furious, turns all of the animals—and their pudding—to stone. (full context) 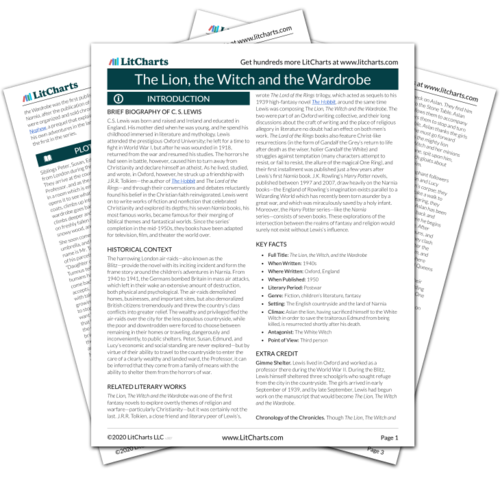 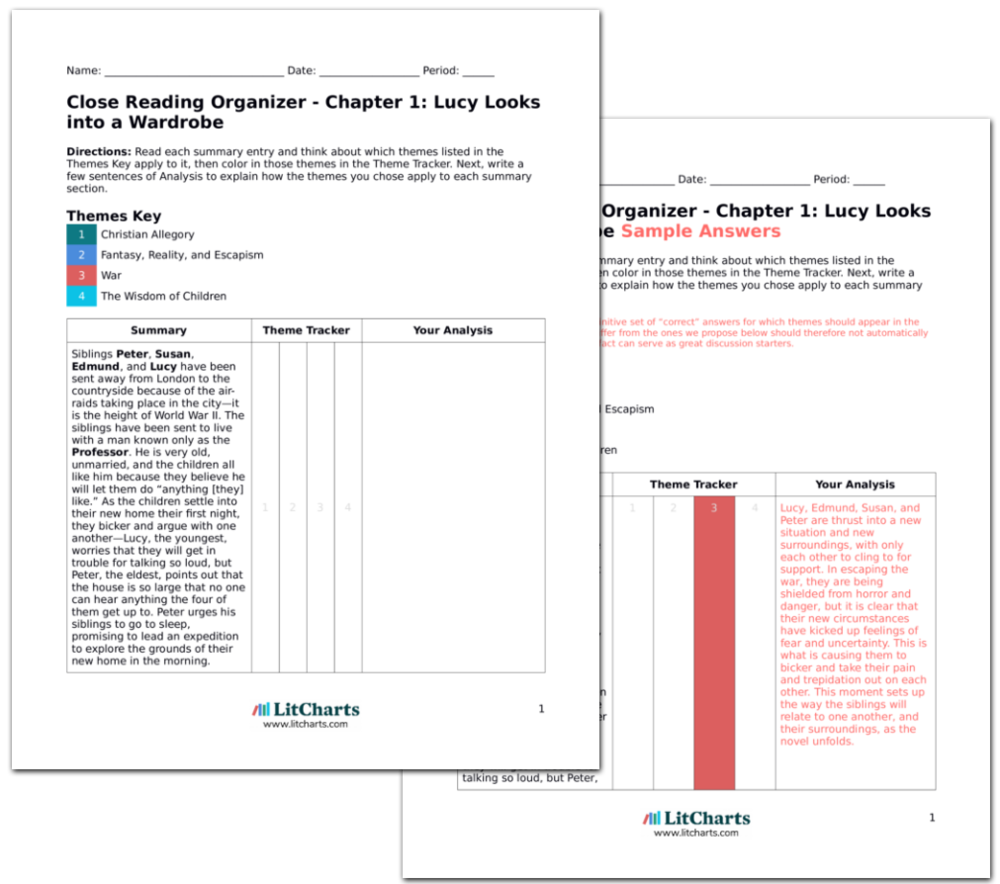