Stars Quotes in The Little Prince

The The Little Prince quotes below all refer to the symbol of Stars. For each quote, you can also see the other characters and themes related to it (each theme is indicated by its own dot and icon, like this one:

"If someone loves a flower, of which just one single blossom grows in all the millions and millions of stars, it is enough to make him happy just to look at the stars. He can say to himself, 'Somewhere, my flower is there...' But if the sheep eats the flower, in one moment all his stars will be darkened... And you think that is not important!"

"Oh, no. Little golden objects that set lazy men to idle dreaming. As for me, I am concerned with matters of consequence. There is no time for idle dreaming in my life."

Unlock with LitCharts A+
Get the entire The Little Prince LitChart as a printable PDF.
"My students can't get enough of your charts and their results have gone through the roof." -Graham S.
Download 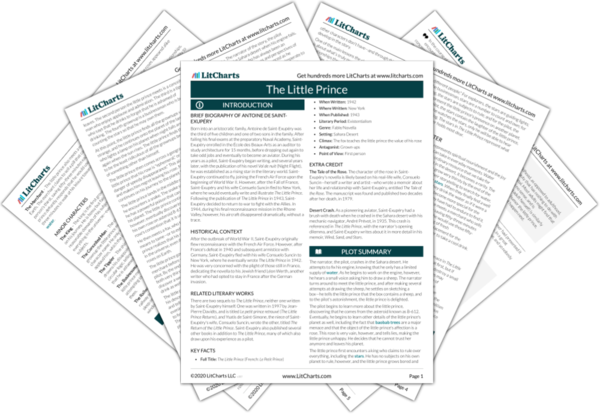 The timeline below shows where the symbol Stars appears in The Little Prince. The colored dots and icons indicate which themes are associated with that appearance.

...result, the pilot brings himself down to their level, talking of sensible matters instead of stars, boa constrictors, or primeval forests. (full context)

The little prince understands that the businessman is counting the stars and asks what one does with five hundred millions of stars. The businessman replies that... (full context)

...After all, each time the lamplighter lights the street lamp, it is as if another star is brought into the world, and this is a thing of beauty—and because his job... (full context)

...little prince a drink, realizing that the water is sweeter for their walk beneath the stars and for his effort acquiring it from the well. (full context)

...will make the pilot a gift of his laughter. Every time the pilot sees the stars, he shall hear the little prince's laughter. (full context)

...landscape of the little prince's site of arrival and departure—two desert hills and a single star—and beseeches readers to pay attention should they find themselves in this spot in Africa. If... (full context)
Previous
Symbols
Previous
Symbols
Next
Water
Next
Water
Get LitCharts