Download this LitChart! (PDF)
Teachers and parents! Struggling with distance learning? Our Teacher Edition on The Lost Salt Gift of Blood can help.

Welcome to the LitCharts study guide on Alistair MacLeod's The Lost Salt Gift of Blood. Created by the original team behind SparkNotes, LitCharts are the world's best literature guides.

A concise biography of Alistair MacLeod plus historical and literary context for The Lost Salt Gift of Blood.

A quick-reference summary: The Lost Salt Gift of Blood on a single page.

In-depth summary and analysis of every of The Lost Salt Gift of Blood. Visual theme-tracking, too.

Explanations, analysis, and visualizations of The Lost Salt Gift of Blood's themes.

The Lost Salt Gift of Blood's important quotes, sortable by theme, character, or .

Description, analysis, and timelines for The Lost Salt Gift of Blood's characters.

Explanations of The Lost Salt Gift of Blood's symbols, and tracking of where they appear.

An interactive data visualization of The Lost Salt Gift of Blood's plot and themes.

Although born in Saskatchewan, Alistair MacLeod was raised from the age of 10 in his parents’ native home of Cape Breton, Nova Scotia, where his family had lived since the 1860s. After his graduation from high school in 1954, he worked a series of odd jobs in Nova Scotia and Canada, including delivering milk, teaching school, mining, and logging, while earning a B.A. at St. Francis Xavier University. He went on to complete a Master’s degree at the University of New Brunswick and a Ph.D. at the University of Notre Dame, where he began writing fiction and, in the year of his graduation, published “The Boat,” which was named one of the best American short stories of 1969. Following his graduation, he became an English professor at the University of Windsor and continued writing during summer vacations, which he spent in his hometown of Cape Breton. In 1971, he married Anita MacLellan, with whom he would have 7 children over the course of a 43-year marriage. He published only five books: The Lost Salt Gift of Blood, his first short story collection, in 1976; As Birds Bring Forth the Sun in 1986; the novel No Great Mischief in 1999; Island, a compilation of his short stories, in 2000; and the novella To Everything There Is A Season in 2004. In total, he wrote fewer than 20 short stories and only one novel during his lifetime. He died at the age of 77 in April of 2014.
Get the entire The Lost Salt Gift of Blood LitChart as a printable PDF.
"My students can't get enough of your charts and their results have gone through the roof." -Graham S.
Download 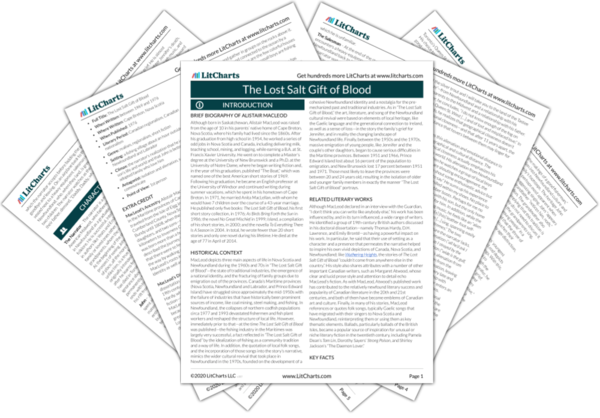 Historical Context of The Lost Salt Gift of Blood

MacLeod depicts three main aspects of life in Nova Scotia and Newfoundland during the 1960s and 70s in “The Lost Salt Gift of Blood”—the state of traditional industries, the emergence of a national identity, and the fracturing of family groups due to emigration out of the provinces. Canada’s Maritime provinces (Nova Scotia, Newfoundland and Labrador, and Prince Edward Island) have struggled since approximately the mid-1950s with the failure of industries that have historically been prominent sources of income, like coal mining, steel making, and fishing. In Newfoundland, the collapses of northern codfish populations circa 1977 and 1993 devastated fishermen and fish plant workers and reshaped the structure of local life. However, immediately prior to that—at the time The Lost Salt Gift of Blood was published—the fishing industry in the Maritimes was largely very successful, a fact reflected in “The Lost Salt Gift of Blood” by the idealization of fishing as a community tradition and a way of life. In addition, the quotation of local folk songs, and the incorporation of those songs into the story’s narrative, mimics the wider cultural revival that took place in Newfoundland in the 1970s, founded on the development of a cohesive Newfoundland identity and a nostalgia for the pre-mechanized past and traditional industries. As in “The Lost Salt Gift of Blood,” the art, literature, and song of the Newfoundland cultural revival were based on elements of local heritage, like the Gaelic language and the generational connection to Ireland, as well as a sense of loss—in the story the family’s grief for Jennifer, and in reality the changing landscape of Newfoundland life. Finally, between the 1950s and the 1970s, massive emigration of young people, like Jennifer and the couple’s other daughters, began to cause serious difficulties in the Maritime provinces. Between 1951 and 1966, Prince Edward Island lost about 16 percent of the population to emigration, and New Brunswick lost 17 percent between 1951 and 1971. Those most likely to leave the provinces were between 20 and 24 years old, resulting in the isolation of older and younger family members in exactly the manner “The Lost Salt Gift of Blood” portrays.

Other Books Related to The Lost Salt Gift of Blood

Although MacLeod declared in an interview with the Guardian, “I don’t think you can write like anybody else,” his work has been influenced by, and in its turn influenced, a wide range of writers. He identified a group of 19th-century British authors discussed in his doctoral dissertation—namely Thomas Hardy, D.H. Lawrence, and Emily Brontë—as having a powerful impact on his work. In particular, he said that their use of setting as a character and a presence that permeates the narrative helped to inspire his own vivid depictions of Canada, Nova Scotia, and Newfoundland; like Wuthering Heights, the stories of The Lost Salt Gift of Blood “couldn’t come from anywhere else in the country.” His style also shares attributes with a number of other important Canadian writers, such as Margaret Atwood, whose clear and lucid prose style and attention to detail echo MacLeod’s fiction. As with MacLeod, Atwood’s published work has contributed to the relatively newfound literary success and popularity of Canadian literature in the 20th and 21st centuries, and both of them have become emblems of Canadian art and culture. Finally, in many of his stories, MacLeod references or quotes folk songs, typically Gaelic songs that have migrated with their singers to Nova Scotia and Newfoundland, reinterpreting them or using them as key thematic elements. Ballads, particularly ballads of the British Isles, became a popular source of inspiration for unusual or niche literary fiction in the twentieth century, including Pamela Dean’s Tam Lin, Dorothy Sayers’ Strong Poison, and Shirley Jackson’s “The Daemon Lover.”
Key Facts about The Lost Salt Gift of Blood

Extra Credit for The Lost Salt Gift of Blood

MacLeod’s Ancestry. Alistair MacLeod’s ancestors first arrived in the Maritime provinces of Canada in the 1790s, when they traveled from the Isle of Eigg in the Inner Hebrides to Cumberland County, Nova Scotia. They lived in the Bay of Bundy until 1808, when the family—the parents, seven daughters, and two sons—walked almost four hundred kilometers to Inverness County, Cape Breton, where MacLeod was born more than a hundred years later. MacLeod himself described the journey in an article for the Toronto Star, adding that there were so few roads at the time that they had to find the way by walking along the shoreline. Like many Maritimers, MacLeod’s roots in the British Isles are an integral part of his identity as well as his fiction.

MacLeod’s Dissertation. MacLeod completed a doctoral dissertation at the University of Notre Dame on the topic of 19th-century British novelists, focusing primarily on Thomas Hardy, whose work bears striking similarities to MacLeod’s fiction—which Macleod was just beginning to write at the time. MacLeod has said, for instance, that he enjoyed Hardy’s novels because they were “about people who lived outdoors and were greatly affected by the forces of nature,” as is the case in “The Lost Salt Gift of Blood,” where the life of the villagers is dependent on the vagaries of weather and ocean. 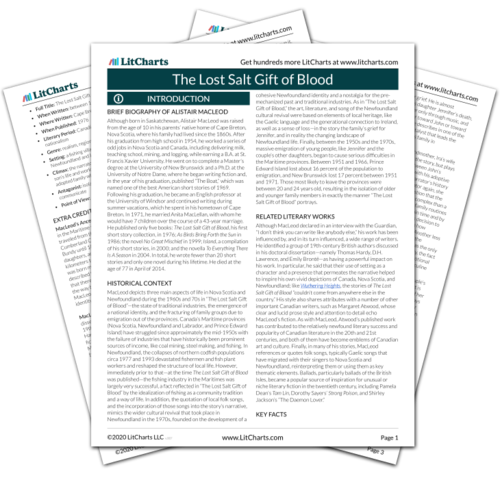 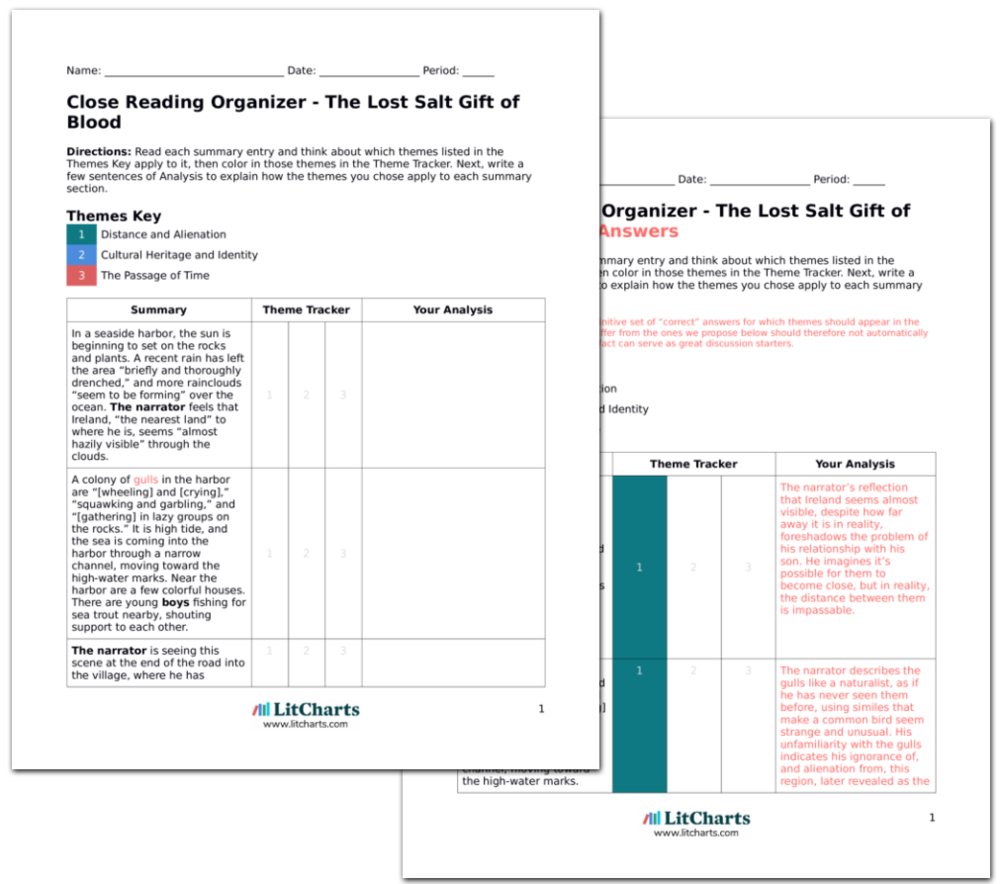