Download this LitChart! (PDF)
Teachers and parents! Struggling with distance learning? Our Teacher Edition on The Magician’s Nephew can help.

Welcome to the LitCharts study guide on C. S. Lewis's The Magician’s Nephew. Created by the original team behind SparkNotes, LitCharts are the world's best literature guides.

A concise biography of C. S. Lewis plus historical and literary context for The Magician’s Nephew.

A quick-reference summary: The Magician’s Nephew on a single page.

In-depth summary and analysis of every chapter of The Magician’s Nephew. Visual theme-tracking, too.

Explanations, analysis, and visualizations of The Magician’s Nephew's themes.

Description, analysis, and timelines for The Magician’s Nephew's characters.

Explanations of The Magician’s Nephew's symbols, and tracking of where they appear.

An interactive data visualization of The Magician’s Nephew's plot and themes.

C. S. Lewis was born in Northern Ireland to Albert James Lewis, a solicitor, and Flora Lewis, the daughter of a Church of Ireland clergyman. Growing up, Clive—who adopted the nickname “Jack” as a young boy—and his brother Warren lived in a house called Little Lea in East Belfast. He loved spending time in his father’s massive library, and he lost his mother to cancer around the age of 10. Lewis entered Oxford University in 1916, but he was soon sent to France to fight in World War I. He was injured in 1918 and thereafter returned to Oxford, where he studied classics, philosophy, and English literature. From 1925–1954, he taught English literature in Oxford’s Magdalen College. Though Lewis had been a staunch atheist since his teen years, he became a Christian in 1931 and remained a committed member of the Church of England for the rest of his life. During World War II, he delivered a series of radio addresses that became the basis for his famous work of apologetics, Mere Christianity. In 1954, Lewis became chair of Medieval and Renaissance Literature at Magdalene College of Cambridge University. Later in life, Lewis married Joy Davidman Gresham, an American woman with whom he had corresponded. She died just a few years later, in 1960, and Lewis followed her in 1963.
Get the entire The Magician’s Nephew LitChart as a printable PDF.
"My students can't get enough of your charts and their results have gone through the roof." -Graham S.
Download 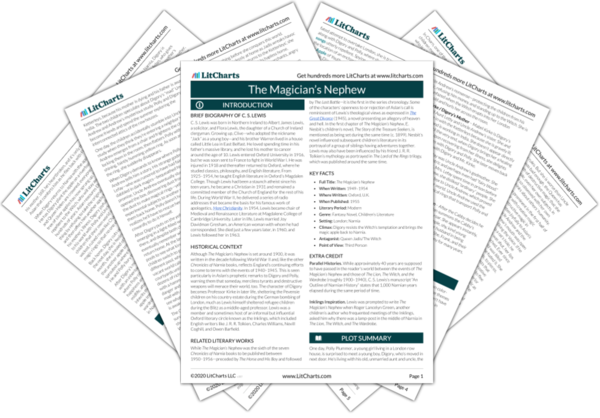 Historical Context of The Magician’s Nephew

Although The Magician’s Nephew is set around 1900, it was written in the decade following World War II and, like the other Chronicles of Narnia books, reflects England’s continuing efforts to come to terms with the events of 1940–1945. This is seen particularly in Aslan’s prophetic remarks to Digory and Polly, warning them that someday, merciless tyrants and destructive weapons will menace their world, too. The character of Digory becomes Professor Kirke in later life, sheltering the Pevensie children on his country estate during the German bombing of London, much as Lewis himself sheltered refugee children during the Blitz as a middle-aged professor. Lewis was a member and sometimes host of an informal but influential Oxford literary circle known as the Inklings, which included English writers like J. R. R. Tolkien, Charles Williams, Nevill Coghill, and Owen Barfield.

Other Books Related to The Magician’s Nephew

While The Magician’s Nephew was the sixth of the seven Chronicles of Narnia books to be published between 1950–1956—preceded by The Horse and His Boy and followed by The Last Battle—it is the first in the series chronology. Some of the characters’ openness to or rejection of Aslan’s call is reminiscent of Lewis’s theological views as expressed in The Great Divorce (1945), a novel presenting an allegory of heaven and hell. In the first chapter of The Magician’s Nephew, E. Nesbit’s children’s novel, The Story of the Treasure Seekers, is mentioned as being set during the same time (c. 1899). Nesbit’s novel influenced subsequent children’s literature in its portrayal of a group of siblings having adventures together. Lewis may also have been influenced by his friend J. R. R. Tolkien’s mythology as portrayed in The Lord of the Rings trilogy, which was published around the same time.
Key Facts about The Magician’s Nephew

Extra Credit for The Magician’s Nephew

Parallel Histories. While approximately 40 years are supposed to have passed in the reader’s world between the events of The Magician’s Nephew and those of The Lion, The Witch, and the Wardrobe (roughly 1900–1940), C. S. Lewis’s manuscript “An Outline of Narnian History” states that 1,000 Narnian years elapsed during the same period of time.

Inklings Inspiration. Lewis was prompted to write The Magician’s Nephew when Roger Lancelyn Green, another children’s author who frequented meetings of the Inklings, asked him why there was a lamp-post in the middle of Narnia in The Lion, The Witch, and The Wardrobe. 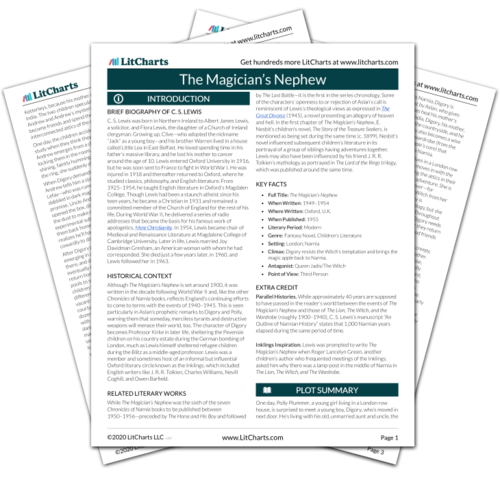 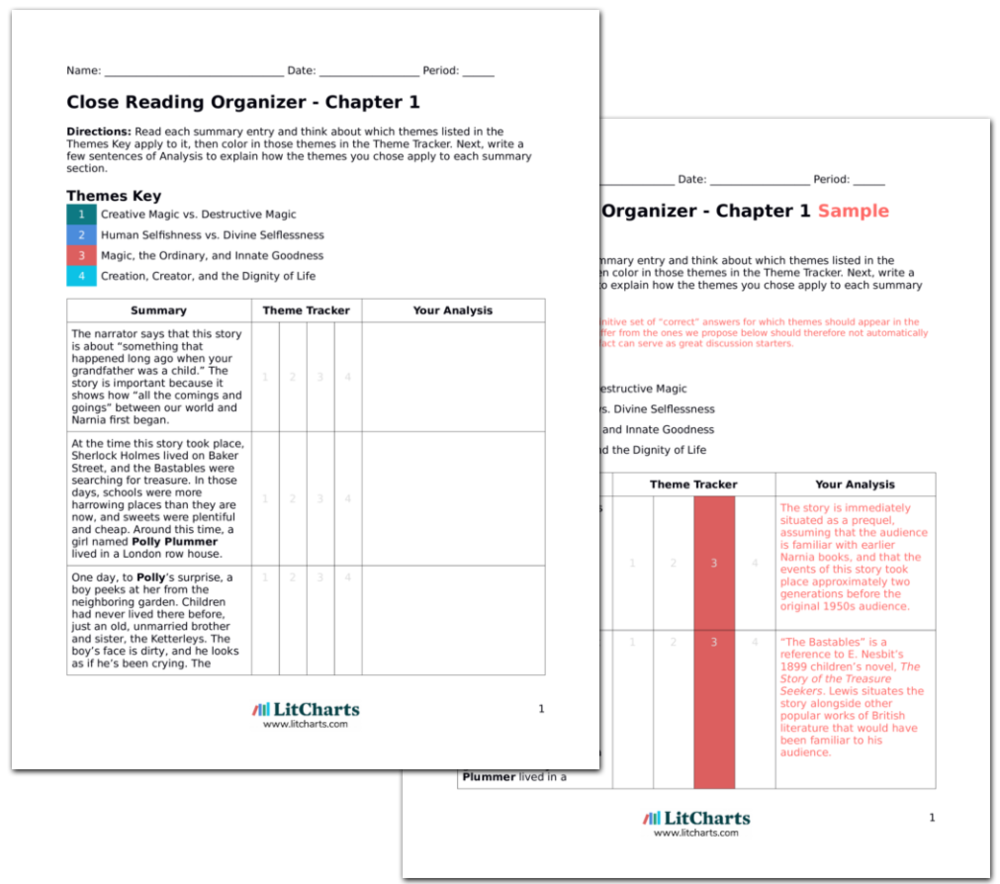