Oliver Sacks’s The Man Who Mistook His Wife for a Hat is divided into four parts, each of which consists of a series of brief case studies centered around some aspect of neurology, the field of science that deals with the nervous system.

In Part One, Sacks discusses neurological disorders that can be construed as deficits in an ordinary function of the brain. He argues that the medical community tends to define almost all neurological disorders as deficits of some kind. But Sacks claims that the paradigm of mental illness as a deficit is too narrow—first, because it marginalizes disorders of the right hemisphere of the brain, which can’t easily be understood as a deficit in a specific brain function, and second, because the paradigm underestimates subjects’ abilities to find ways of compensating for mental illness and making up for the “deficit.”

Patients discussed in Part One include Dr. P., who has a rare form of face blindness that leaves him unable to distinguish between his wife’s face and his own hat; Jimmie G., who has Korsakov’s Syndrome, meaning that he can’t remember anything for more than a few seconds; Christina, who loses her sense of proprioception, meaning that she can’t feel her own body; Madeline J., who has cerebral palsy and claims to be unable to control her own hands; Mr. MacGregor, who walks with a tilt because Parkinson’s has prevented his mind from integrating information from the vestibular system; and Mrs. S., who lost the ability to conceive of “left” after having a stroke.

Throughout Part One, Sacks shows how patients find ways of compensating for their deficiencies, whether unconsciously or consciously. With Sacks’s help, Christina, Mr. MacGregor, Mrs. S., and Madeline J. train themselves to work around their neurological problems, so that they can live relatively normal lives.

In Part Two, Sacks discusses kinds of neurological illness that can be conceived of as abundances of a certain mental process (excesses rather than deficits). In so doing, he talks about action and the effects of a neurological abundance on a patient’s day-to-day life, rather than talking strictly about the afflicted portion of the brain, as is too often the case in ordinary neurology.

In Part Two, Sacks discusses several patients who’ve suffered from Tourette’s Syndrome. Until the middle of the 1970s, Tourette’s was a relatively unknown disorder, and was thought to be incredibly rare. During that decade, however, the medical establishment gradually came to realize that Tourette’s was very common. Sacks attributes doctors’ low comprehension of Tourette’s to the overly clinical, mechanical formats of most of the tests that neurologists use to examine patients. Sacks also discusses examples of illnesses that could be construed as benefits—in certain cases, patients have reported that bouts of syphilis left them feeling lively and energetic. Sacks also discusses patients who react to their disorders by “equalizing” themselves with the world—in other words, compensating for their sense of confusion or chaos by adopting a new attitude or behavior. One such patient, William Thompson, who, like Jimmie G., couldn’t remember anything for long, equalized his condition by improvising endless, contradictory identities for himself, so that he would have some sense of a “self” despite having no memory.

In Part Three, Sacks turns to cases in which a neurological condition alters a patient’s perception of the world in a way that could be construed as visionary, otherworldly, or euphoric. He discusses two women who reported hearing loud, beautiful music in their heads, and guesses that these women were experiencing recurring seizures in the temporal lobes of their brains. He also writes about a young Indian girl, Bhagawhandi P., who, after developing a terminal tumor, became nostalgic and euphoric, as if she were having a strange kind of seizure. Another patient whom Sacks once examined, named Donald, murdered his child while high on PCP, but later claimed to forget the act altogether. Later, after sustaining a head trauma, Donald reported experiencing the act of killing again and again in almost photographic detail. Donald eventually learned how to live with his new condition—he couldn’t make the visions go away, but he developed strategies for coping with them. The final person that Sacks discusses in Part Three is Hildegard of Bingen, the famous 12th century Christian mystic. Sacks guesses that Hildegard may have had recurring seizures that allowed her to have vivid hallucinations, which she interpreted as divine visions. In light of the full medical information, one could dismiss Hildegard’s visions as “merely” physiological in origin, Sacks acknowledges, but one could continue to respect her imagination, her intelligence, and her religious piety.

In the fourth and final part of the book, Sacks discusses his work with patients who are mentally challenged in some significant way. At the beginning of his career, Sacks found the prospect of working with intellectually disabled patients to be depressing, but over time, he’s come to recognize the beauty of intellectually disabled patients’ views of the world. The guiding theme of Part Four is concreteness—the worldview that conceives of reality as a set of material things, rather than a set of abstract concepts.

Many of the intellectually disabled patients that Sacks discusses in Part Four have a special sense of connection with the concrete world, almost as if their minds compensate for the lack of abstract thought. One such patient, Rebecca, had a very low IQ, but also an impressive gift for poetry and poetic imagery—she could describe her feelings in intricate material terms, and found ways of using words to render complex emotions in tangible, concrete ways. Another intellectually disabled patient, Martin A., had an almost perfect knowledge of Western musical history, as well as a sophisticated appreciation for the music of Johan Sebastian Bach. Sacks also discusses “the twins,” John and Michael, who, in spite of their mental deficiencies, had profound mathematical gifts. Sacks ends his chapter on the twins by noting bitterly that John and Michael were later separated, and thereafter lost their powers of mathematical calculation, the one great source of joy in their lives.

In the final chapter of Part Four, Sacks discusses his work with José, an autistic child who excelled at drawing. Sacks realized that, even though José was closed off and didn’t talk much with other people, he used drawing to forge a connection with the external world. Sacks argues that society needs to learn how to help autistic people develop their unique gifts, rather than marginalizing them and treating them as social outcasts. 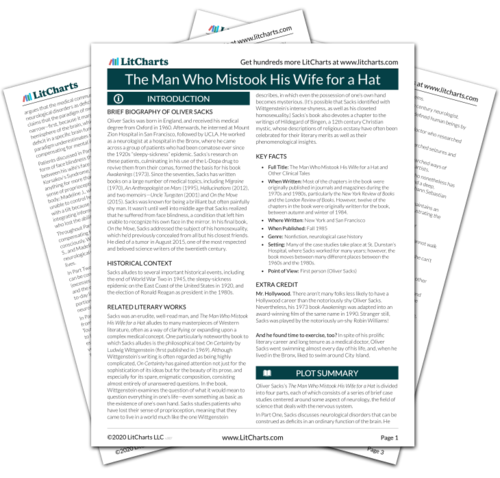 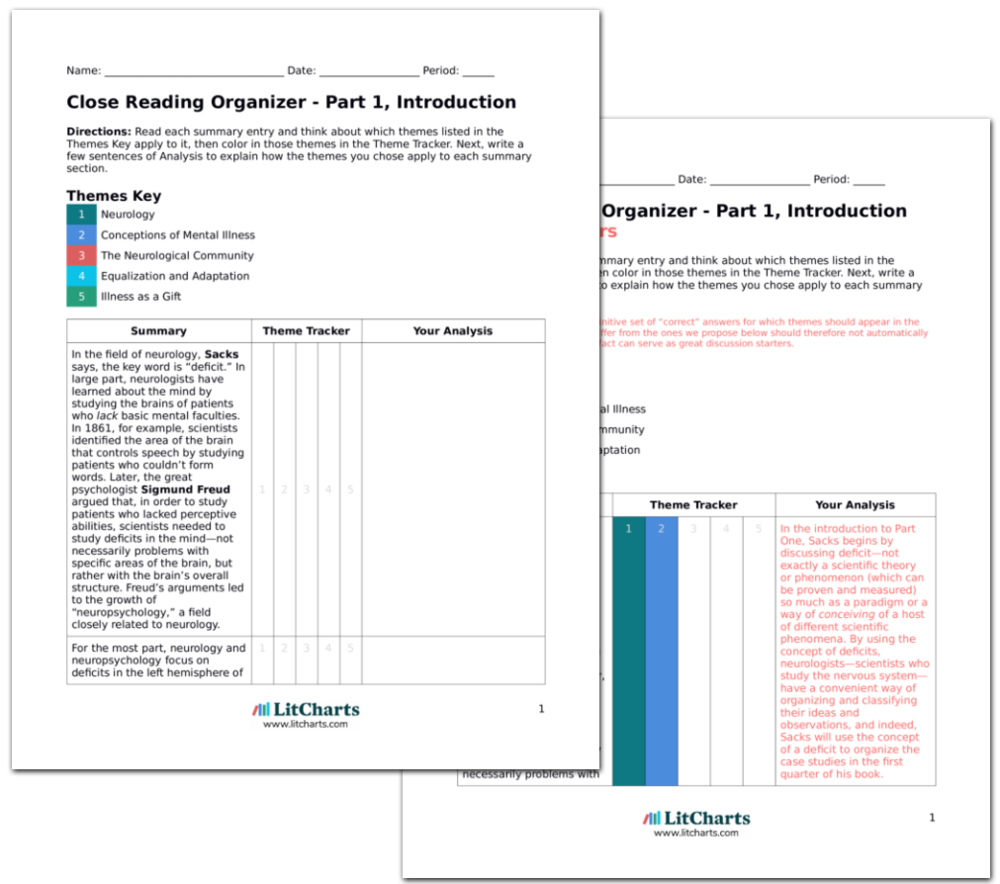