The Merchant of Venice

Upgrade to A+
Introduction
Plot Summary
Detailed Summary
& Analysis
Themes
Quotes
Characters
Symbols
Theme Wheel
A prosperous Venetian merchant, liked and admired by his fellow citizens. To help his friend Bassanio woo Portia, Antonio signs a contract with Shylock, guaranteeing a loan with one pound of his own flesh as collateral. Many critics argue that Antonio harbors an unrequited erotic desire for Bassanio. In contrast to the benevolence that he shows others, Antonio expresses an intense hatred of Shylock and the Jews, though at the end of the play he does argue that Shylock should be shown mercy and not be condemned to death.

Antonio Quotes in The Merchant of Venice

The The Merchant of Venice quotes below are all either spoken by Antonio or refer to Antonio. For each quote, you can also see the other characters and themes related to it (each theme is indicated by its own dot and icon, like this one:

). Note: all page numbers and citation info for the quotes below refer to the Simon & Schuster edition of The Merchant of Venice published in 2009.
Act 1, scene 1 Quotes
In sooth, I know not why I am so sad.
Related Characters: Antonio (speaker)
Related Themes:

Unlock explanations and citation info for this and every other The Merchant of Venice quote.

Get LitCharts A+
Already a LitCharts A+ member? Sign in!
I hold the world but as the world, Gratiano—
A stage, where every man must play a part;
And mine a sad one.
Related Characters: Antonio (speaker), Gratiano
Related Themes:

Unlock with LitCharts A+
Many a time and oft
In the Rialto you have rated me
About my moneys and my usances:
Still I have borne it with a patient shrug,
For sufferance is the badge of all our tribe.
You call me misbeliever, cut-throat dog,
And spit upon my Jewish gaberdine,
And all for use of that which is mine own.
Related Characters: Shylock (speaker), Antonio
Related Themes:

Unlock with LitCharts A+
Let the forfeit
Be nominated for an equal pound
Of your fair flesh, to be cut off and taken
In what part of your body pleaseth me.
Related Characters: Shylock (speaker), Antonio
Related Themes:

Unlock with LitCharts A+
Act 3, scene 1 Quotes
If it will feed nothing else, it will feed my revenge.
Related Characters: Shylock (speaker), Antonio
Related Themes:

Unlock with LitCharts A+
Act 4, scene 1 Quotes
I am a tainted wether of the flock,
Meetest for death: the weakest kind of fruit
Drops earliest to the ground.
Related Characters: Antonio (speaker)
Related Themes:

Unlock with LitCharts A+
Which is the merchant here, and which the Jew?
Related Characters: Portia (speaker), Shylock, Antonio
Related Themes:

Unlock with LitCharts A+
Get the entire The Merchant of Venice LitChart as a printable PDF.
"My students can't get enough of your charts and their results have gone through the roof." -Graham S.
Download it!

Antonio Character Timeline in The Merchant of Venice

The timeline below shows where the character Antonio appears in The Merchant of Venice. The colored dots and icons indicate which themes are associated with that appearance.

On a street in Venice, the merchant Antonio tells his friends Solanio and Salerio that he feels "so sad" (1.1.1) but doesn't know... (full context)

Bassanio, a relative and close friend of Antonio's, enters with his friends Lorenzo and Gratiano. After politely greeting the newcomers, Solanio and Salerio... (full context)

Once alone, Bassanio apologizes for Gratiano's insensitivity and reveals why he's come to see Antonio. He is in love with Portia, a wealthy noblewoman, and hopes to seek her hand... (full context)

Antonio replies that he will do anything for his friend and is happy to place both... (full context)

...to convince Shylock, a Jewish moneylender, to lend him 3,000 ducats for three months, with Antonio bound to repay the debt. Frustrated by Shylock's stalling, Bassanio demands an answer. Shylock concedes... (full context)

Shylock then asks whether he can speak with Antonio himself. Bassanio invites Shylock to dine with them both that night, but Shylock declines. Although... (full context)

By coincidence, at this moment, Antonio appears. Although Shylock notices Antonio at once, at first he ignores him, remarking privately that... (full context)

Antonio approaches Shylock, saying that he ordinarily would not take part in a transaction involving interest... (full context)

...of Jacob. When Jacob was working as a shepherd for his uncle Laban, Shylock reminds Antonio, he found a clever way to earn interest for his efforts. He cut a deal... (full context)

...Bible in order to defend what Venetian Christians consider to be the sin of usury, Antonio insults Shylock. Shylock, in turn, cites Antonio's previous mistreatment of him: Antonio has publicly abused... (full context)

Teasing Antonio for getting so worked up, Shylock then goes on to propose an unusual compromise. He... (full context)

Antonio agrees, despite Bassanio's nervousness about binding his friend to such a potentially dangerous contract. Talking... (full context)

As Jessica, Lorenzo, and the other "masqueing mates" head out into the street, Antonio intercepts them. He scolds Gratiano for being late to Bassanio's dinner, and says that Bassanio... (full context)

Their tone suddenly grows somber, though, when Solanio remarks that Antonio may be the one who ends up paying for Shylock's loss. Salerio reports that he... (full context)

Solanio says of Antonio, "a kinder gentleman treads not the earth." He adds that when Bassanio departed for Belmont,... (full context)

Solanio then asks whether Shylock has heard any more news of Antonio's losses at sea. Shylock says he has, and ominously adds that Antonio can look forward... (full context)

One of Antonio's servants enters and announces that Antonio would like to see Solanio and Salerio. As they... (full context)

Shylock is somewhat consoled, though, when Tubal reminds him that Antonio has lost another of his ships at Tripolis, and "is certainly undone" (3.1.124). Shylock announces... (full context)

...Salerio. Bassanio and Portia welcome them. Salerio explains that he is carrying a letter from Antonio for Bassanio. Gratiano and Nerissa continue to flirt and joke cluelessly as Bassanio begins reading. (full context)

...increasingly upset as he reads the letter. He tells Portia about the money he allowed Antonio to borrow from Shylock and of Antonio's lost ships. Salerio curses Shylock's brutality: "Never did... (full context)

Portia asks Bassanio whether Antonio is a dear friend. When Bassanio affirms that he is, Portia offers to pay the... (full context)

Bassanio reads the text aloud. In it, Antonio confesses to that there is no chance that he will survive Shylock's extracting of the... (full context)

Back in Venice, Shylock escorts Antonio to prison, accompanied by a jailer and Solanio. Shylock tauntingly tells the jailer not to... (full context)

Antonio gives up on asking for mercy. He knows that Shylock wants revenge on him because... (full context)

Solanio assures Antonio that the Duke won't allow Shylock's demand to be carried out. Antonio disagrees: "The Duke... (full context)

Antonio jokes that he has grown so thin in his stress and grief that it will... (full context)

...Portia are chatting. Lorenzo reassures Portia that if she knew what a "true gentleman" (3.4.6) Antonio is, she would only be more proud of her good deed. Portia replies that she... (full context)

In Venice, the Duke opens Antonio's trial by saying that he pities Antonio because Shylock is an "inhuman wretch uncapable of... (full context)

...Shylock into court, and tells him that everyone believes that he means only to terrify Antonio with this performance, and that, at the last minute, Shylock will show mercy, spare Antonio,... (full context)

Bassanio, who is in the gathered crowd, tries to argue with Shylock. But Antonio interrupts, telling Bassanio it's no use: you might as well try to argue with a... (full context)

...messenger has come bearing letters from Bellario, and goes to get him. Privately, Bassanio urges Antonio to try to keep his spirits up, but Antonio responds that he is like the... (full context)

Portia asks if Antonio has the money to repay Shylock. Bassanio responds that he has offered up to ten... (full context)

Portia states that Shylock is entitled to take a pound of flesh nearest Antonio's heart. She begs him, once more, to be merciful. Shylock again refuses. Portia instructs Antonio... (full context)

Portia asks Antonio for any last words. Antonio tells Bassanio not to grieve, to send his best wishes... (full context)

But just as Shylock is about to cut into Antonio, Portia reminds Shylock that the contract doesn't grant him any drop of blood from Antonio's... (full context)

...(4.1.364). He will spare Shylock's life, but Shylock must give half of his wealth to Antonio and half to the state of Venice. Portia then asks Antonio to weigh in. Antonio... (full context)

...Balthazar, to dinner. She declines on the grounds that she must get back to Padua. Antonio and Bassanio also thank Portia. Bassanio tries give Portia the 3000 ducats he'd brought to... (full context)

After Portia and Nerissa exit, Antonio tells Bassanio that he should value Balthazar's efforts to save Antonio's life more than his... (full context)

...house and bring the deed for him to sign, giving half of his property to Antonio. Then they will have to speed to get back to Belmont before their husbands. Portia... (full context)

...tells Portia that Bassanio has sent the ring and asks him to join them at Antonio's house for dinner. Initially startled, Portia recovers her composure. She takes the ring and tells... (full context)

At that moment, Bassanio, Antonio, and Gratiano enter. Portia welcomes Bassanio home; Bassanio introduces Antonio and asks her to "give... (full context)

...will only forgive him this once, he will never again break an oath with her. Antonio supports Bassanio, saying that he will be bound for his friend once more, and offer... (full context)

Portia accepts the deal. She hands Antonio the ring, which she pretends is a different ring, and tells him to give it... (full context)

Portia also has a letter for Antonio with even better news: three of his ships have suddenly come to harbor, full of... (full context) 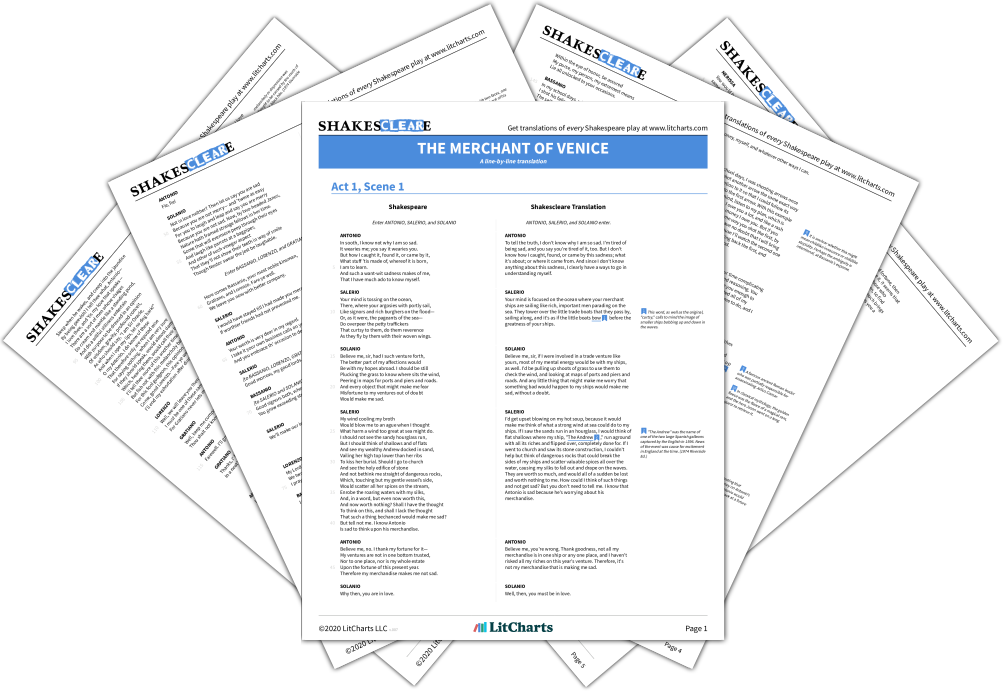 “Every teacher of literature should use these translations. They completely demystify Shakespeare. Students love them!”
Get it!