Somnauth Quotes in The Moonstone

The The Moonstone quotes below are all either spoken by Somnauth or refer to Somnauth. For each quote, you can also see the other terms and themes related to it (each theme is indicated by its own dot and icon, like this one:

). Note: all page numbers and citation info for the quotes below refer to the Penguin edition of The Moonstone published in 1999.
The Discovery of the Truth 2: 3 Quotes

“In the name of the Regent of the Night, whose seat is on the Antelope, whose arms embrace the four corners of the earth.

Brothers, turn your faces to the south, and come to me in the street of many noises, which leads down to the muddy river.

The reason is this.

My own eyes have seen it.”

The curtain between the trees was drawn aside, and the shrine was disclosed to view.

There, raised high on a throne—seated on his typical antelope, with his four arms stretching towards the four corners of the earth—there, soared above us, dark and awful in the mystic light of heaven, the god of the Moon. And there, in the forehead of the deity, gleamed the yellow Diamond, whose splendour had last shone on me in England, from the bosom of a woman's dress!
Yes! after the lapse of eight centuries, the Moonstone looks forth once more, over the walls of the sacred city in which its story first began. How it has found its way back to its wild native land—by what accident, or by what crime, the Indians regained possession of their sacred gem, may be in your knowledge, but is not in mine. You have lost sight of it in England, and (if I know anything of this people) you have lost sight of it for ever.
So the years pass, and repeat each other; so the same events revolve in the cycles of time. What will be the next adventures of the Moonstone? Who can tell!

Unlock with LitCharts A+
Get the entire The Moonstone LitChart as a printable PDF.
"My students can't get enough of your charts and their results have gone through the roof." -Graham S.
Download it! 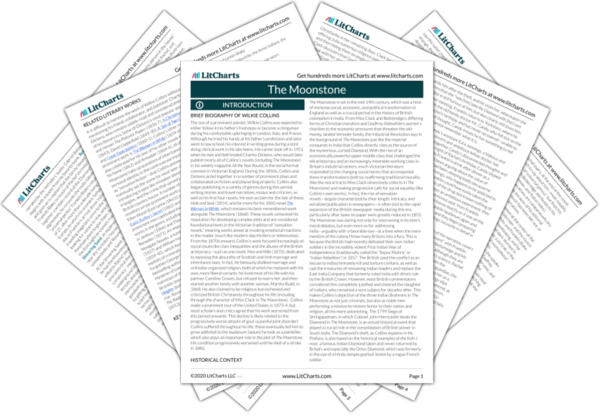 Somnauth Term Timeline in The Moonstone

The timeline below shows where the term Somnauth appears in The Moonstone. The colored dots and icons indicate which themes are associated with that appearance.

...in Rome and Greece.) In the 11th century, Muslim invaders pillaged a famous temple in Somnauth and took everything but this statue, which three Brahmins preserved in a new shrine in... (full context)

...known” area named Kattiawar, which is devoutly Hindu and home to the holy city of Somnauth—which was destroyed in the 11th century by Muslim invaders. On his way to Somnauth, Murthwaite... (full context)

When he arrives in Somnauth, Murthwaite’s friends bring him to the Moon god’s shrine, which is hidden behind trees and... (full context) 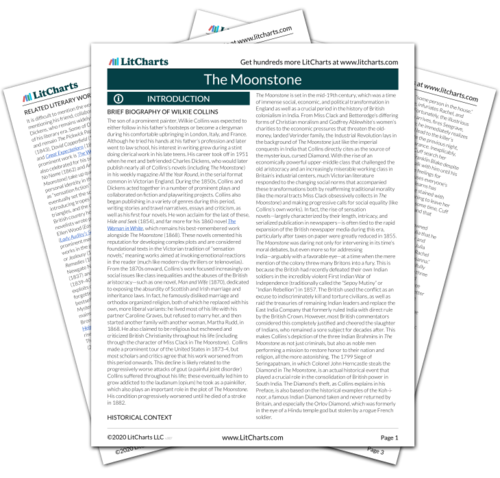 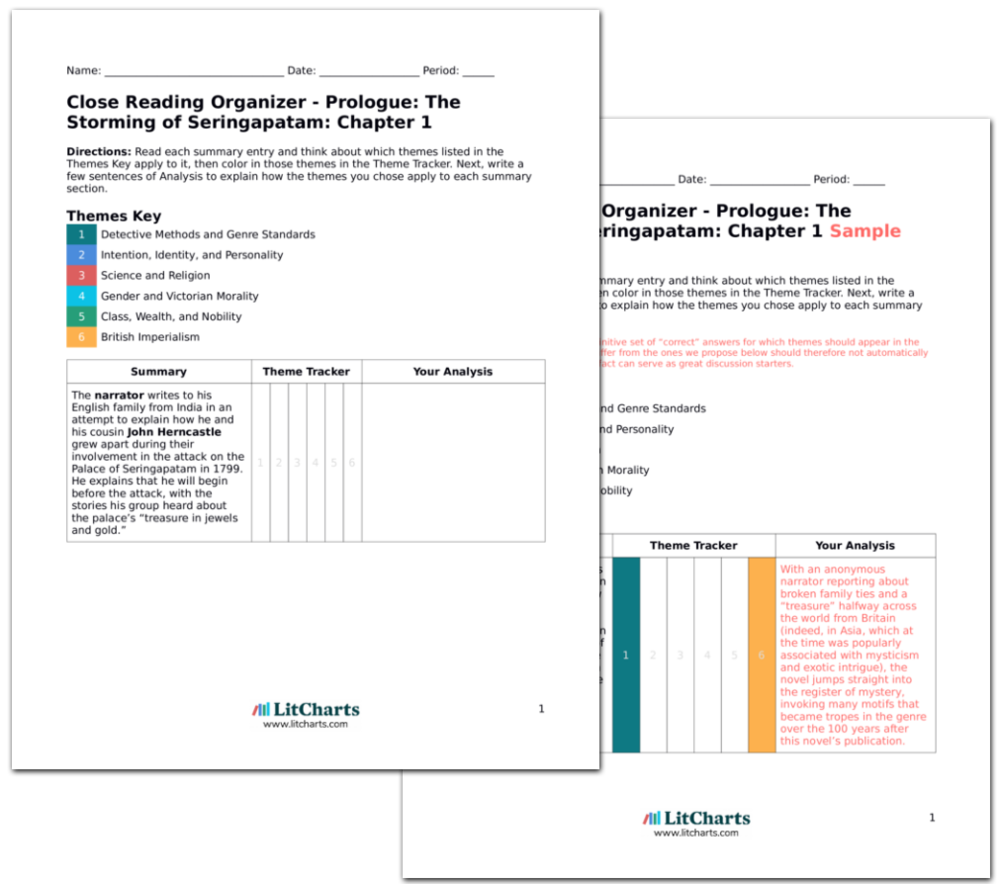