As with many mystery novels, there are relatively few symbols in The Murder of Roger Ackroyd; emphasis is instead placed on the literal, albeit initially unclear, significance of various pieces of evidence, rather than on the abstract, symbolic meaning of these things. However, Dr. James Sheppard plays a game of Mah Jong with his sister Caroline and two friends, Colonel Carter and Miss Gannett. (Mah Jong is a traditional Chinese game, somewhat similar to bridge or gin rummy, that was very popular in England at the time.) During the game, Sheppard gets a “perfect hand,” and, encouraged by his victory in the game, begins spilling secrets about his friendship with Hercule Poirot. The Mah Jong game could be interpreted as a symbol of the secrets that all people—especially the suspects in a murder case!—are hiding. As in a game of Mah Jong, these secrets eventually come to light, and sometimes, when the murderer has a “perfect hand” (i.e., has committed a seemingly “perfect crime”), he feels an unconscious need to spill his secret to other people. (It’s worth noting that Agatha Christie often uses games to symbolize characters’ psychological attributes—in Cards on the Table, for example, Hercule Poirot solves a case by studying how the suspects play bridge.)

Mah Jong Quotes in The Murder of Roger Ackroyd

The The Murder of Roger Ackroyd quotes below all refer to the symbol of Mah Jong. For each quote, you can also see the other characters and themes related to it (each theme is indicated by its own dot and icon, like this one:

It was then that I went on, goaded by Caroline's gibes, and rendered reckless by my triumph.
“And as to anything interesting,” I said. “What about a gold wedding ring with a date and ‘From R.’ inside.”

Get the entire Murder of Roger Ackroyd LitChart as a printable PDF.
"My students can't get enough of your charts and their results have gone through the roof." -Graham S.
Download 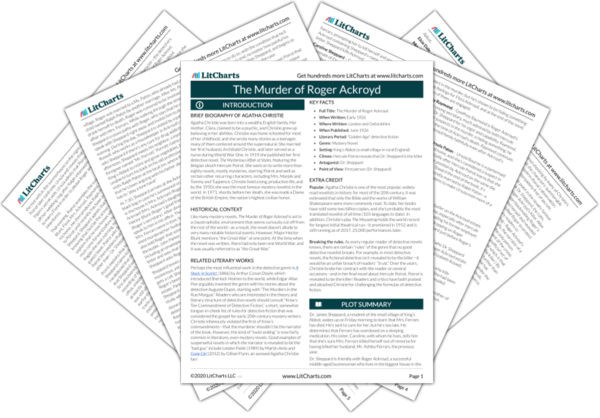 Mah Jong Symbol Timeline in The Murder of Roger Ackroyd

The timeline below shows where the symbol Mah Jong appears in The Murder of Roger Ackroyd. The colored dots and icons indicate which themes are associated with that appearance.

The night after the previous chapter, Sheppard and Caroline play Mah Jong with two gossipy friends, Colonel Carter and Miss Gannett. As they play, Carter mentions that... (full context)

...hasn’t shared any information with him. Suddenly, he notices that he’s been dealt the perfect Mah Jong hand, the so-called “Perfect Winning.” “Reckless with triumph,” Dr. Sheppard proceeds to tell his guests... (full context)