From start to finish, "The Nightingale and the Rose" is a story about the nature of love. Love is what the Student claims to feel for the girl, and it is also what inspires the Nightingale to sacrifice her life to create a red rose; doing so, she thinks, will help the Student win his sweetheart's affection. The fact that neither the Student nor the girl appreciates the Nightingale's sacrifice, however, complicates the story's meaning. In the end, Wilde suggests that true love is possible, but that much of what people commonly call love is shallow and self-interested.

The Student is a prime example of this self-absorption, the full extent of which only becomes clear at the end of the story; when the girl rejects his rose, he is quick to label her "ungrateful," and love in general "silly." In retrospect, however, it is clear that the Student's love was self-absorbed all along. While it is common for stylized literature (like fairy tales) to include dramatic monologues, the protestations of love that open "The Nightingale and the Rose" take on a stagey and attention-seeking quality in light of the story's ending. Wilde drops another similar hint when he describes the Student going back to his room and "think[ing] of his love." The ambiguous phrasing could simply mean that the Student is thinking about the girl, but it could also imply that he is narcissistically poring over his own emotional state. The girl, meanwhile, reveals herself to be equally self-centered when she exchanges the Student for a wealthier lover, leaving only the Nightingale to symbolize true, deep love.

The Nightingale, of course, is undeniably selfless. She is outwardly focused from the beginning, singing not about her own feelings, but about those of the "true lover" she dreams of meeting. Later, she flies from place to place attempting to find a red rose on someone else's behalf, her persistence standing in marked contrast to the Student's quickly-abandoned courtship. These small moments of altruism and self-denial culminate in her decision to sacrifice her life; death—the complete loss of selfhood—is the ultimate expression of selflessness. In fact, Wilde suggests that "perfect" love can exist only in death for precisely this reason. Because true love requires selflessness, death is its logical endpoint.

Ultimately, then, the fact that the Nightingale's sacrifice is based on a misreading of the Student's feelings doesn't alter the story's defense of love itself. By dying, the Nightingale herself proves the existence of true love, which the story suggests will outlive her: as she dies, the Nightingale sings about "Love that dies not in the tomb." 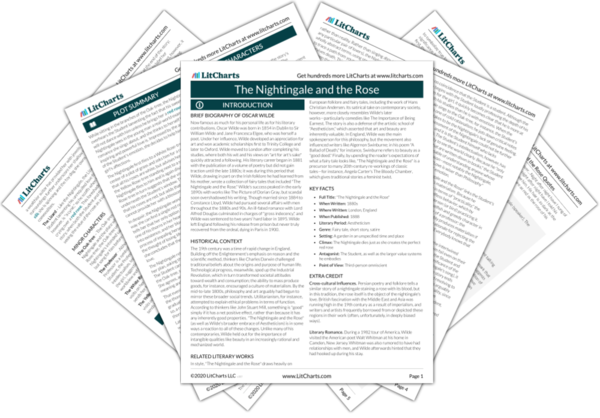 Love and Sacrifice Quotes in The Nightingale and the Rose

Surely Love is a wonderful thing. It is more precious than emeralds, and dearer than fine opals. Pearls and pomegranates cannot buy it, nor is it set forth in the market-place. It may not be purchased of the merchants, nor can it be weighed out in the balance for gold.

"He is weeping for a red rose," said the Nightingale.

"For a red rose?" they cried; "how very ridiculous!" and the little Lizard, who was something of a cynic, laughed outright.

If you want a red rose…you must build it out of music by moonlight, and stain it with your own heart's-blood. You must sing to me with your breast against a thorn. All night long you must sing to me, and the thorn must pierce your heart, and your life-blood must flow into my veins, and become mine.

The Student looked up from the grass and listened, but he could not understand what the Nightingale was saying to him, for he only knew the things that are written down in books.

The daughter of the Professor was sitting in the doorway winding blue silk on a reel, and her little dog was lying at her feet.

What a silly thing Love is…It is not half as useful as Logic, for it does not prove anything, and it is always telling one of things that are not going to happen, and making one believe things that are not true. In fact, it is quite unpractical, and…in this age to be practical is everything.