Download this LitChart! (PDF)
Teachers and parents! Struggling with distance learning? Our Teacher Edition on The Oval Portrait can help.

Welcome to the LitCharts study guide on Edgar Allan Poe's The Oval Portrait. Created by the original team behind SparkNotes, LitCharts are the world's best literature guides.

A concise biography of Edgar Allan Poe plus historical and literary context for The Oval Portrait.

A quick-reference summary: The Oval Portrait on a single page.

In-depth summary and analysis of every of The Oval Portrait. Visual theme-tracking, too.

Explanations, analysis, and visualizations of The Oval Portrait's themes.

The Oval Portrait's important quotes, sortable by theme, character, or .

Description, analysis, and timelines for The Oval Portrait's characters.

Explanations of The Oval Portrait's symbols, and tracking of where they appear.

An interactive data visualization of The Oval Portrait's plot and themes.

Edgar Allan Poe’s life was tragic from the beginning. He was abandoned by his father before he was a year old, and his mother died of consumption (tuberculosis) only a year later. After being taken in by a wealthy merchant and slave trader, Poe received an excellent education but struggled for social acceptance. He drifted between attempts to conform and his need to find himself throughout his life. Poe served in the military in various capacities, only to be discharged after several failed attempts to meet expectations. His gambling debts and argumentative nature eventually led to the loss of his foster family’s support and his reputation. Poe drank to excess, and his dark, despairing moods often took disturbing life in his works. Despite this, he went on to write a prolific body of work, including dozens of poems and short tales, several essays, and two serialized novels. A life that began with tragedy ended in much the same way when Poe was found incoherently shouting on the streets of Baltimore in someone else’s clothes. He was taken to Washington Medical College, where he died a few days later. Poe’s work outlived him, however, and today he is considered one of the most important voices in 19th century American literature.
Get the entire The Oval Portrait LitChart as a printable PDF.
"My students can't get enough of your charts and their results have gone through the roof." -Graham S.
Download 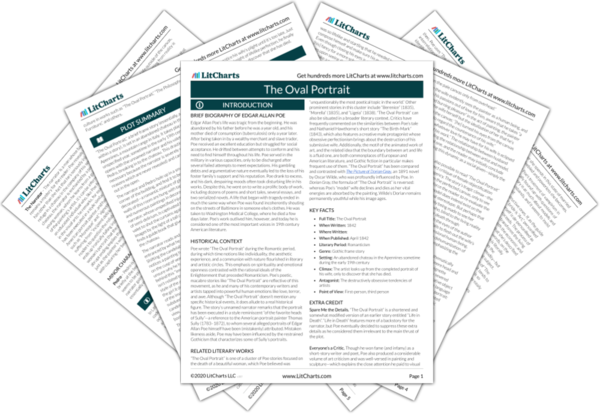 Historical Context of The Oval Portrait

Poe wrote “The Oval Portrait” during the Romantic period, during which time notions like individuality, the aesthetic experience, and a communion with nature flourished in literary and artistic circles. This emphasis on spirituality and emotional openness contrasted with the rational ideals of the Enlightenment that preceded Romanticism. Poe’s poetic, macabre stories like “The Oval Portrait” are reflective of this movement, as he and many of his contemporary writers and artists tapped into powerful human emotions like love, terror, and awe. Although “The Oval Portrait” doesn’t mention any specific historical events, it does allude to a real historical figure. The story’s unnamed narrator remarks that the portrait has been executed in a style reminiscent “of the favorite heads of Sully”—a reference to the American portrait painter Thomas Sully (1783–1872), to whom several alleged portraits of Edgar Allan Poe himself have been (mistakenly) attributed. Mistaken likeness aside, Poe may have been influenced by the restrained Gothicism that characterizes some of Sully’s portraits.

Other Books Related to The Oval Portrait

“The Oval Portrait” is one of a cluster of Poe stories focused on the death of a beautiful woman, which Poe believed was “unquestionably the most poetical topic in the world.” Other prominent stories in this cluster include “Berenice” (1835), “Morella” (1835), and “Ligeia” (1838). “The Oval Portrait” can also be situated in a broader literary context. Critics have frequently commented on the similarities between Poe’s tale and Nathaniel Hawthorne’s short story “The Birth-Mark” (1843), which also features a creative male protagonist whose obsessive perfectionism brings about the destruction of his submissive wife. Additionally, the motif of the animated work of art, and the related idea that the boundary between art and life is a fluid one, are both commonplaces of European and American literature, and Gothic fiction in particular makes frequent use of them. “The Oval Portrait” has been compared and contrasted with The Picture of Dorian Gray, an 1891 novel by Oscar Wilde, who was profoundly influenced by Poe. In Dorian Gray, the formula of “The Oval Portrait” is reversed: whereas Poe’s “model” wife declines and dies as her vital energies are absorbed by the painting, Wilde’s Dorian remains permanently youthful while his image ages.
Key Facts about The Oval Portrait

Extra Credit for The Oval Portrait

Spare Me the Details. “The Oval Portrait” is a shortened and somewhat modified version of an earlier story entitled “Life in Death”. “Life in Death” features more of a backstory for the narrator, but Poe eventually decided to suppress these extra details as he considered them irrelevant to the main thrust of the plot.

Everyone’s a Critic. Though he won fame (and infamy) as a short-story writer and poet, Poe also produced a considerable volume of art criticism and was well-versed in painting and sculpture—which explains the close attention he paid to visual culture in works such as “The Oval Portrait,” “The Philosophy of Furniture,” and others. 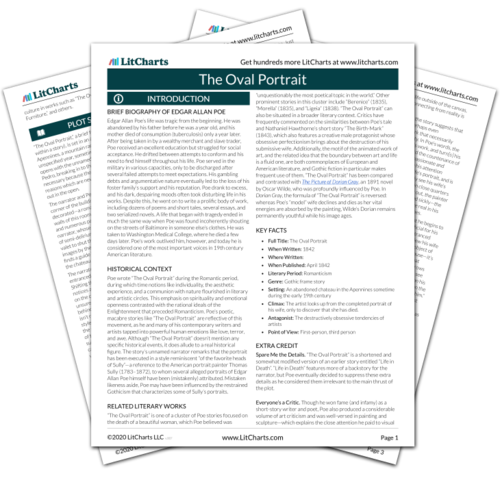 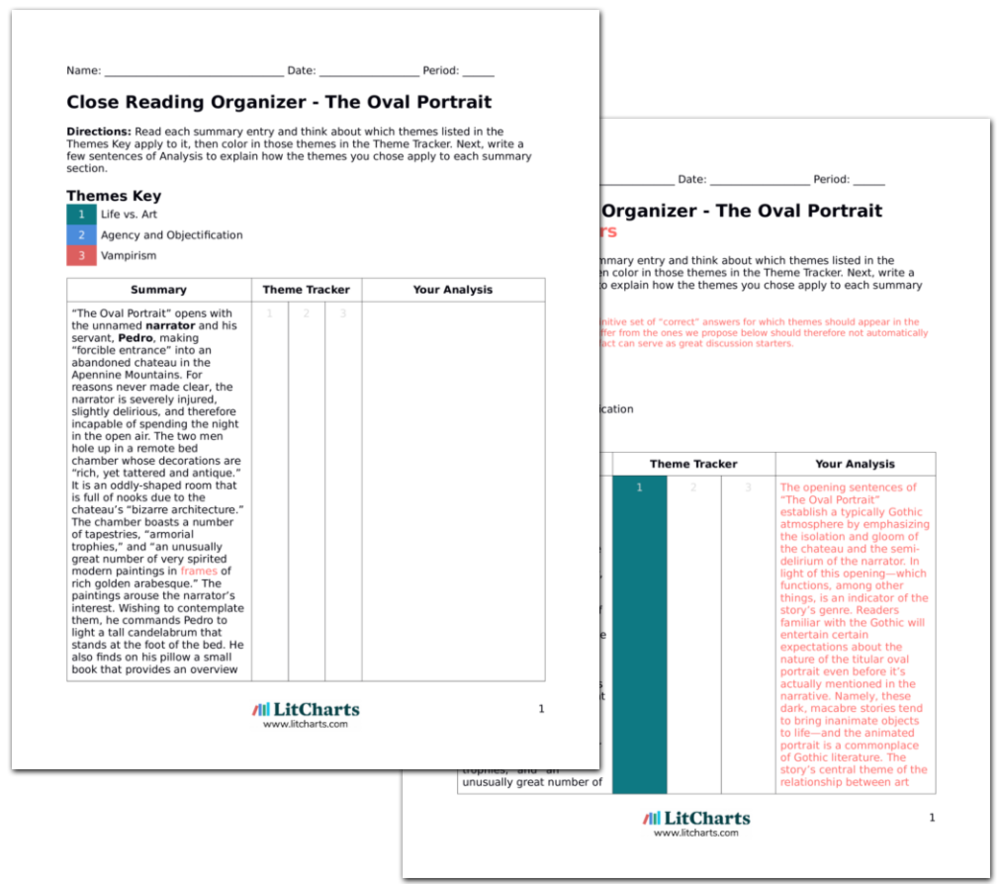