Download this LitChart! (PDF)
Teachers and parents! Struggling with distance learning? Our Teacher Edition on The Phoenix can help.

Welcome to the LitCharts study guide on Sylvia Townsend Warner's The Phoenix. Created by the original team behind SparkNotes, LitCharts are the world's best literature guides.

A concise biography of Sylvia Townsend Warner plus historical and literary context for The Phoenix.

A quick-reference summary: The Phoenix on a single page.

In-depth summary and analysis of every of The Phoenix. Visual theme-tracking, too.

Explanations, analysis, and visualizations of The Phoenix's themes.

The Phoenix's important quotes, sortable by theme, character, or .

Description, analysis, and timelines for The Phoenix's characters.

Explanations of The Phoenix's symbols, and tracking of where they appear.

An interactive data visualization of The Phoenix's plot and themes.

Sylvia Townsend Warner was born on December 6th, 1893, to a middle-class family in Harrow-on-the-Hill, England. Though her father was a teacher at the all-boys Harrow School, Warner was homeschooled in her childhood. A gifted musician, Warner started her career as a musicologist, but later became a novelist after moving to London and befriending writers who would later become part of the Bloomsbury set. Her first novel, Lolly Willowes, was published in 1926. In Dorset, Warner met her partner of forty years, the female poet Valentine Ackland. The two women became committed members of the Communist Party, and in 1937, they travelled together to Spain during the Civil War to try to stop the spread of Fascism. Warner’s novels, poetry, and short stories explore themes of feminism, socialism, and homosexuality. After Ackland died of cancer in 1969, Warner remained alone until her own death—of old age—in 1978.
Get the entire The Phoenix LitChart as a printable PDF.
"My students can't get enough of your charts and their results have gone through the roof." -Graham S.
Download 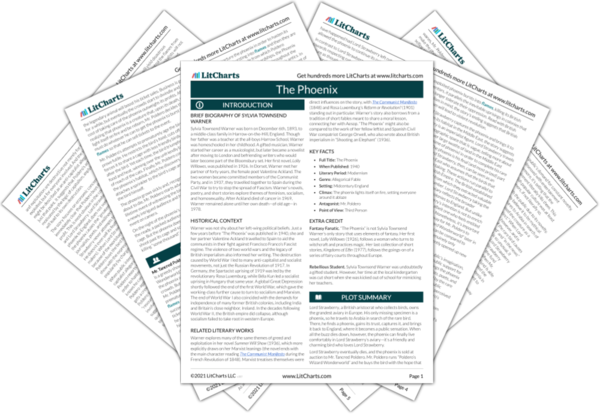 Historical Context of The Phoenix

Warner was not shy about her left-wing political beliefs. Just a few years before “The Phoenix” was published in 1940, she and her partner Valentine Ackland travelled to Spain to aid the communists in their fight against Francisco Franco’s Fascist regime. The violence of two world wars and the legacy of British imperialism also informed her writing. The destruction caused by World War I led to many anti-capitalist and socialist movements, not just the Russian Revolution of 1917. In Germany, the Spartacist uprising of 1919 was led by the revolutionary Rosa Luxemburg, while Béla Kun led a socialist uprising in Hungary that same year. A global Great Depression shortly followed the end of the first World War, which gave the working-class further cause to turn to socialism and Marxism. The end of World War I also coincided with the demands for independence of many former British colonies, including India and Britain’s close neighbor, Ireland. In the decades following World War II, the British empire did collapse, although socialism failed to take root in western Europe.

Other Books Related to The Phoenix

Warner explores many of the same themes of greed and exploitation in her novel Summer Will Show (1936), which more explicitly draws on her Marxist leanings (the novel ends with the main character reading The Communist Manifesto during the French Revolution of 1848). Marxist treatises themselves were direct influences on the story, with The Communist Manifesto (1848) and Rosa Luxemburg’s Reform or Revolution? (1901) standing out in particular. Warner’s story also borrows from a tradition of short fables meant to share a moral lesson, connecting her with Aesop. “The Phoenix” might also be compared to the work of her fellow leftist and Spanish Civil War compatriot George Orwell, who also wrote about British imperialism in “Shooting an Elephant” (1936).
Key Facts about The Phoenix

Extra Credit for The Phoenix

Fantasy Fanatic. “The Phoenix” is not Sylvia Townsend Warner’s only story that uses elements of fantasy. Her first novel, Lolly Willowes (1926), follows a woman who turns to witchcraft and practices magic. Her last collection of short stories, Kingdoms of Elfin (1977), follows the goings-on of a series of fairy courts throughout Europe.

Rebellious Student. Sylvia Townsend Warner was undoubtedly a gifted student. However, her time at the local kindergarten was cut short when she was kicked out of school for mimicking her teachers. 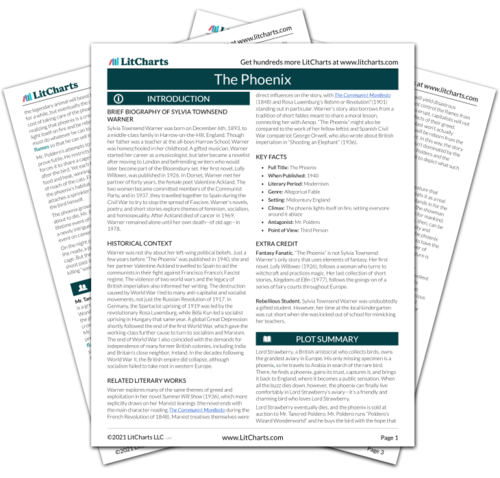 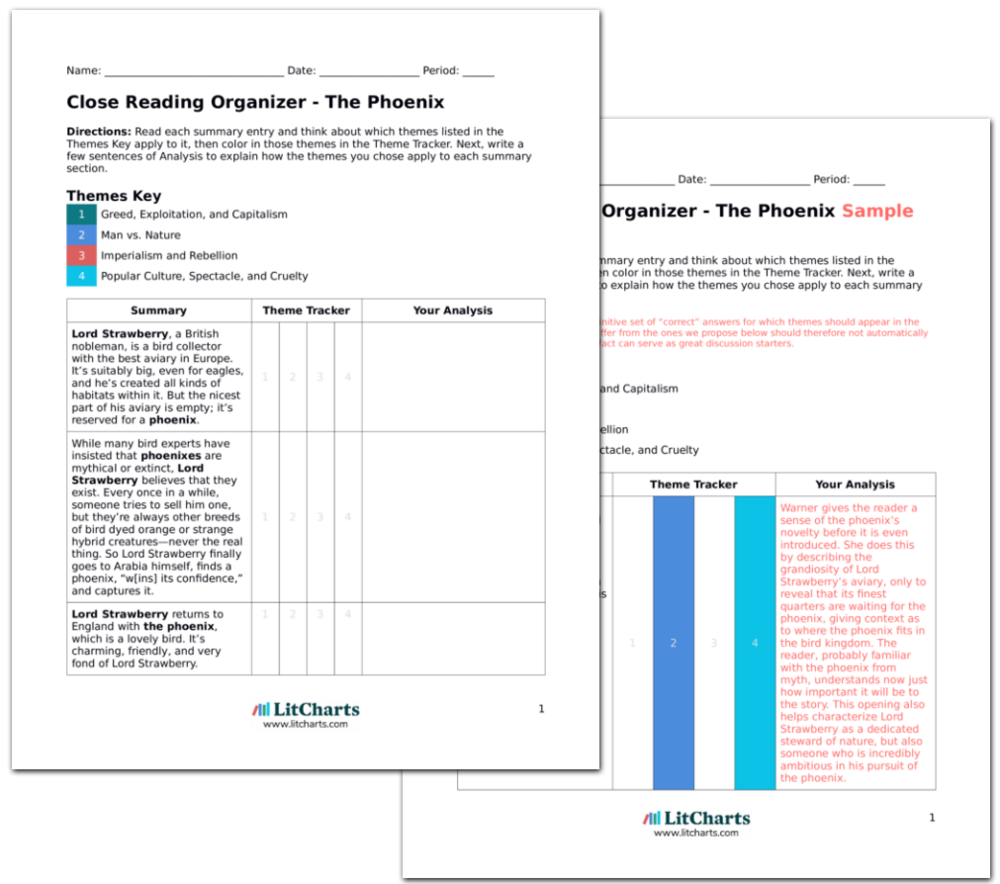