Download this LitChart! (PDF)
Teachers and parents! Struggling with distance learning? Our Teacher Edition on The Piano Lesson can help.

Welcome to the LitCharts study guide on August Wilson's The Piano Lesson. Created by the original team behind SparkNotes, LitCharts are the world's best literature guides.

A concise biography of August Wilson plus historical and literary context for The Piano Lesson.

A quick-reference summary: The Piano Lesson on a single page.

In-depth summary and analysis of every scene of The Piano Lesson. Visual theme-tracking, too.

Explanations, analysis, and visualizations of The Piano Lesson's themes.

Description, analysis, and timelines for The Piano Lesson's characters.

Explanations of The Piano Lesson's symbols, and tracking of where they appear.

An interactive data visualization of The Piano Lesson's plot and themes.

August Wilson’s mother, Daisy Wilson, was African American woman; his father, Frederick Kittel, was of Sudeten German origins (Germans living in what was then Bohemia). Wilson’s parents divorced while he was young, and he and his five siblings remained with their mother in Pittsburgh, where they lived in predominantly poor Black and Jewish neighborhoods. Wilson always identified strongly with his mother’s Black heritage and culture. He faced prejudice while attending Catholic school, being one of few African American students, and eventually dropped out to study in the Carnegie Library of Pittsburgh. After his father’s death when Wilson was 20, he took the name August Wilson and began writing. A few years later, he cofounded the Black Horizon Theater in Pittsburgh. After some initial efforts at poetry, Wilson moved to St. Paul, Minnesota in 1978 and began writing plays instead. He finished his first, Jitney, in 1979. Eight years later, Fences garnered both a Pulitzer Prize and a Tony Award; the following year, The Piano Lesson followed suit with another Pulitzer. Ten of Wilson’s best-known and most critically acclaimed plays formed the Pittsburgh Cycle, with each play focusing on one decade of the African American experience. Wilson was married three times. At the time of his death from cancer in 2005, he was married to a costume designer named Costanza Romero.
Get the entire The Piano Lesson LitChart as a printable PDF.
"My students can't get enough of your charts and their results have gone through the roof." -Graham S.
Download 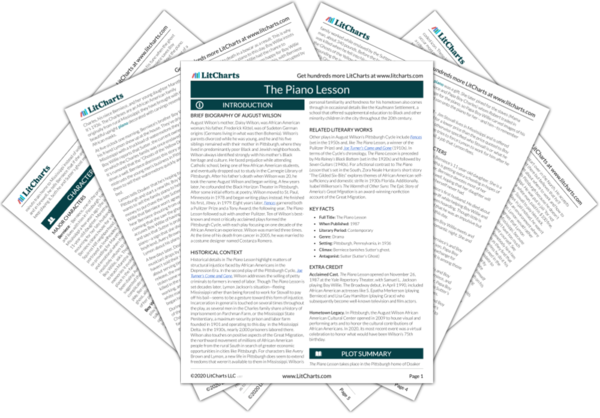 Historical Context of The Piano Lesson

Historical details in The Piano Lesson highlight matters of structural injustice faced by African Americans in the Depression Era. In the second play of the Pittsburgh Cycle, Joe Turner’s Come and Gone, Wilson addresses the selling of petty criminals to farmers in need of labor. Though The Piano Lesson is set decades later, Lymon Jackson’s situation—fleeing Mississippi rather than being forced to work for Stovall to pay off his bail—seems to be a gesture toward this form of injustice. Incarceration in general is touched on several times throughout the play, as several men in the Charles family share a history of imprisonment on Parchman Farm, or the Mississippi State Penitentiary, a maximum-security prison and labor farm founded in 1901 and operating to this day  in the Mississippi Delta. In the 1930s, nearly 2,000 prisoners labored there. Wilson also touches on positive aspects of the Great Migration, the northward movement of millions of African American people from the rural South in search of greater economic opportunities in cities like Pittsburgh. For characters like Avery Brown and Lymon, a new life in Pittsburgh does seem to extend freedoms that weren’t available to them in Mississippi. Wilson’s personal familiarity and fondness for his hometown also comes through in occasional details like the Kaufmann Settlement, a school that offered supplemental education to Black and other minority children in the city throughout the 20th century.

Other Books Related to The Piano Lesson

Other plays in August Wilson’s Pittsburgh Cycle include Fences (set in the 1950s and, like The Piano Lesson, a winner of the Pulitzer Prize) and Joe Turner’s Come and Gone (1910s). In terms of the Cycle’s chronology, The Piano Lesson is preceded by Ma Rainey’s Black Bottom (set in the 1920s) and followed by Seven Guitars (1940s). For a fictional contrast to The Piano Lesson that’s set in the South, Zora Neale Hurston’s short story “The Gilded Six-Bits” explores themes of African American self-sufficiency and domestic strife in 1930s Florida. Additionally, Isabel Wilkerson’s The Warmth of Other Suns: The Epic Story of America’s Great Migration is an award-winning nonfiction account of the Great Migration.
Key Facts about The Piano Lesson

Extra Credit for The Piano Lesson

Hometown Legacy. In Pittsburgh, the August Wilson African American Cultural Center opened in 2009 to house visual and performing arts and to honor the cultural contributions of African Americans. In 2020, its most recent event was a virtual celebration to honor what would have been Wilson’s 75th birthday. 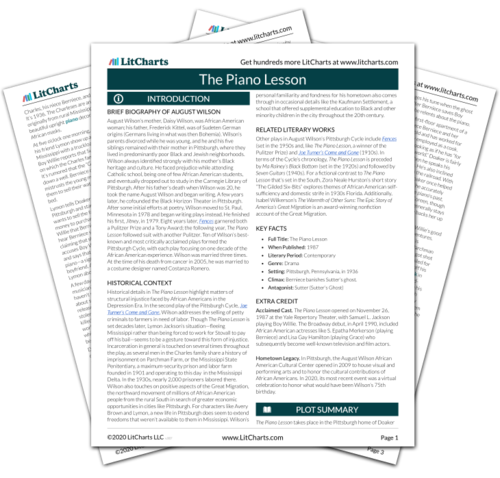 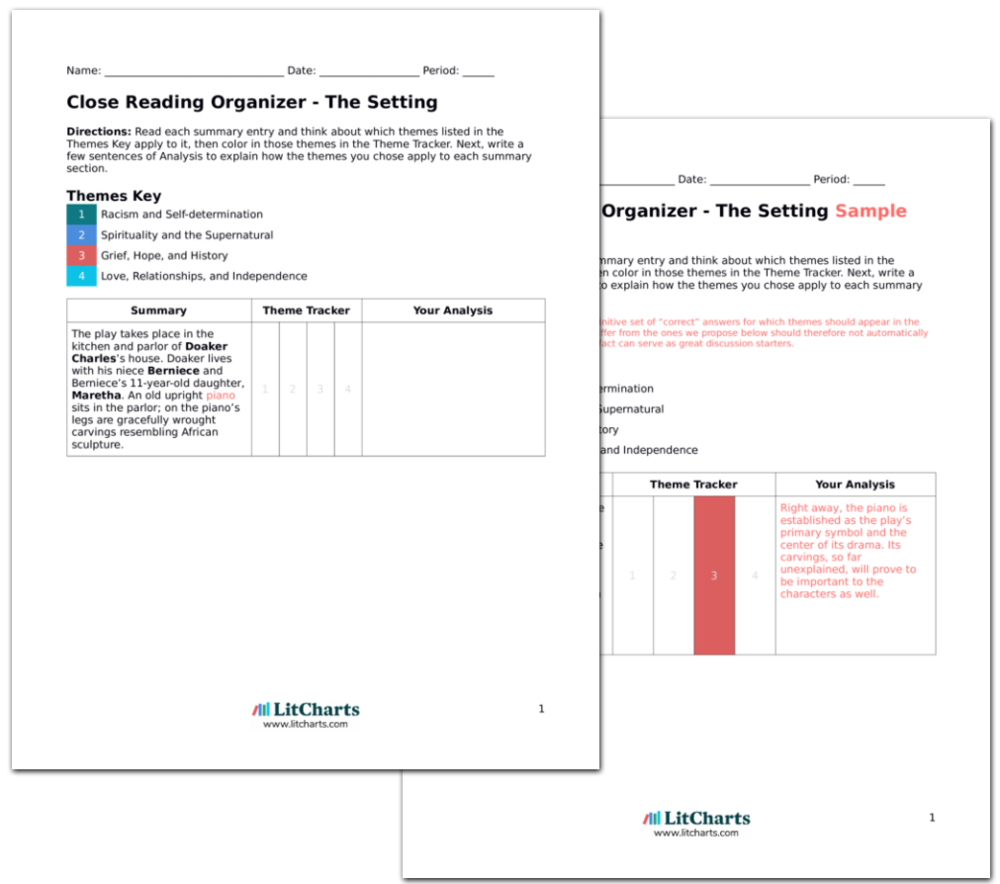