Download this LitChart! (PDF)
Teachers and parents! Struggling with distance learning? Our Teacher Edition on The Pillow Book can help.

Welcome to the LitCharts study guide on Sei Shonagon's The Pillow Book. Created by the original team behind SparkNotes, LitCharts are the world's best literature guides.

A concise biography of Sei Shonagon plus historical and literary context for The Pillow Book.

A quick-reference summary: The Pillow Book on a single page.

In-depth summary and analysis of every section of The Pillow Book. Visual theme-tracking, too.

Explanations, analysis, and visualizations of The Pillow Book's themes.

Description, analysis, and timelines for The Pillow Book's characters.

Explanations of The Pillow Book's symbols, and tracking of where they appear.

An interactive data visualization of The Pillow Book's plot and themes.

Sei Shōnagon was a real-life figure in Heian Japan. She was the daughter of Kiyohara no Motosuke, a provincial governor and noted poet. Little is known of Sei’s biography beyond the experiences she records in The Pillow Book. Even her personal name isn’t known for sure—“Sei” is a variation of the family name, Kiyohara, and “Shōnagon” might be a reference to a husband’s or other relative’s rank. She was probably married to a courtier named Tachibana Norimitsu while still in her teens, and they may have had a son, but the marriage does not seem to have lasted. Sei entered Empress Teishi’s court at the imperial capital of Kyoto sometime in 993 C.E. In her late twenties at the time, she was about 10 years older than both the Empress and most of the other gentlewomen who served the Empress in court. Sei probably continued to serve in court until Empress Teishi died in the year 1000 C.E., and nothing is definitively known of Sei’s life after that point.
Get the entire The Pillow Book LitChart as a printable PDF.
"My students can't get enough of your charts and their results have gone through the roof." -Graham S.
Download 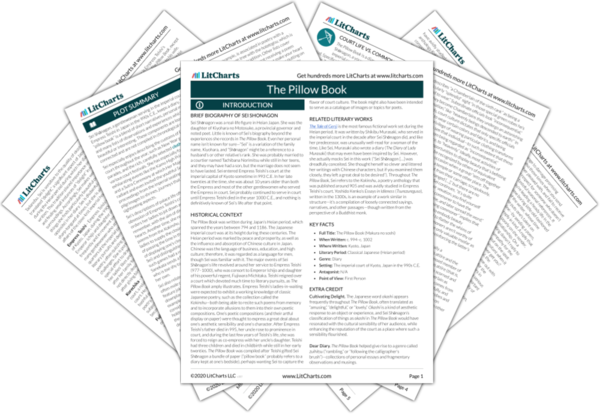 Historical Context of The Pillow Book

The Pillow Book was written during Japan’s Heian period, which spanned the years between 794 and 1186. The Japanese imperial court was at its height during these centuries. The Heian period was marked by peace and prosperity, as well as the influence and absorption of Chinese culture in Japan. Chinese was the language of business, education, and high culture; therefore, it was regarded as a language for men, though Sei was familiar with it. The major events of Sei Shōnagon’s life revolved around her service to Empress Teishi (977–1000), who was consort to Emperor Ichijo and daughter of his powerful regent, Fujiwara Michitaka. Teishi reigned over a court which devoted much time to literary pursuits, as The Pillow Book amply illustrates. Empress Teishi’s ladies-in-waiting were expected to exhibit a working knowledge of classic Japanese poetry, such as the collection called the Kokinshu—both being able to recite such poems from memory and to incorporate allusions to them into their own poetic compositions. One’s poetic compositions (and their artful display on paper) were thought to express a great deal about one’s aesthetic sensibility and one’s character. After Empress Teishi’s father died in 995, her uncle rose to prominence in court, and during the last few years of Teishi’s life, she was forced to reign as co-empress with her uncle’s daughter. Teishi had three children and died in childbirth while still in her early twenties. The Pillow Book was compiled after Teishi gifted Sei Shōnagon a bundle of paper (“pillow book” probably refers to a diary kept at one’s bedside), perhaps wanting Sei to capture the flavor of court culture. The book might also have been intended to serve as a catalogue of images or topics for poets.

Other Books Related to The Pillow Book

The Tale of Genji is the most famous fictional work set during the Heian period. It was written by Shikibu Murasaki, who served in the imperial court in the decade after Sei Shōnagon did, and like her predecessor, was unusually well-read for a woman of the time. Like Sei, Murasaki also wrote a diary (The Diary of Lady Murasaki) that may even have been inspired by Sei. However, she actually mocks Sei in this work (“Sei Shōnagon […] was dreadfully conceited. She thought herself so clever and littered her writings with Chinese characters; but if you examined them closely, they left a great deal to be desired”). Throughout The Pillow Book, Sei refers to the Kokinshu, a poetry anthology that was published around 905 and was avidly studied in Empress Teishi’s court. Yoshido Kenko’s Essays in Idleness (Tsurezuregusa), written in the 1300s, is an example of a work similar in structure—it’s a compilation of loosely connected sayings, narratives, and other passages—though written from the perspective of a Buddhist monk.
Key Facts about The Pillow Book

Extra Credit for The Pillow Book

Cultivating Delight. The Japanese word okashi appears frequently throughout The Pillow Book, often translated as “amusing,” “delightful,” or “lovely.” Okashi is a kind of aesthetic response to an object or experience, and Sei Shōnagon’s classification of things as okashi in The Pillow Book would have resonated with the cultural sensibility of her audience, while enhancing the reputation of the court as a place where such a sensibility flourished.

Dear Diary. The Pillow Book helped give rise to a genre called zuihitsu (“rambling,” or “following the calligrapher’s brush”)—collections of personal essays and fragmentary observations and musings. 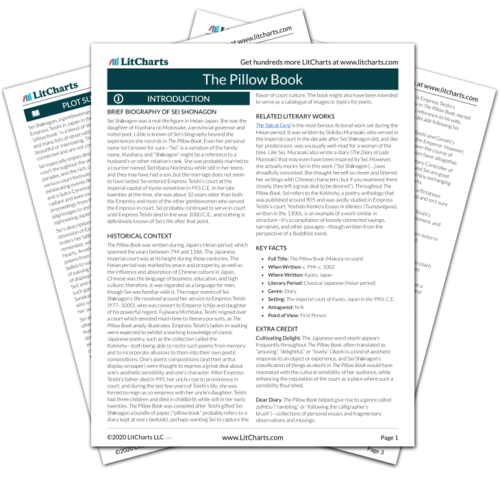 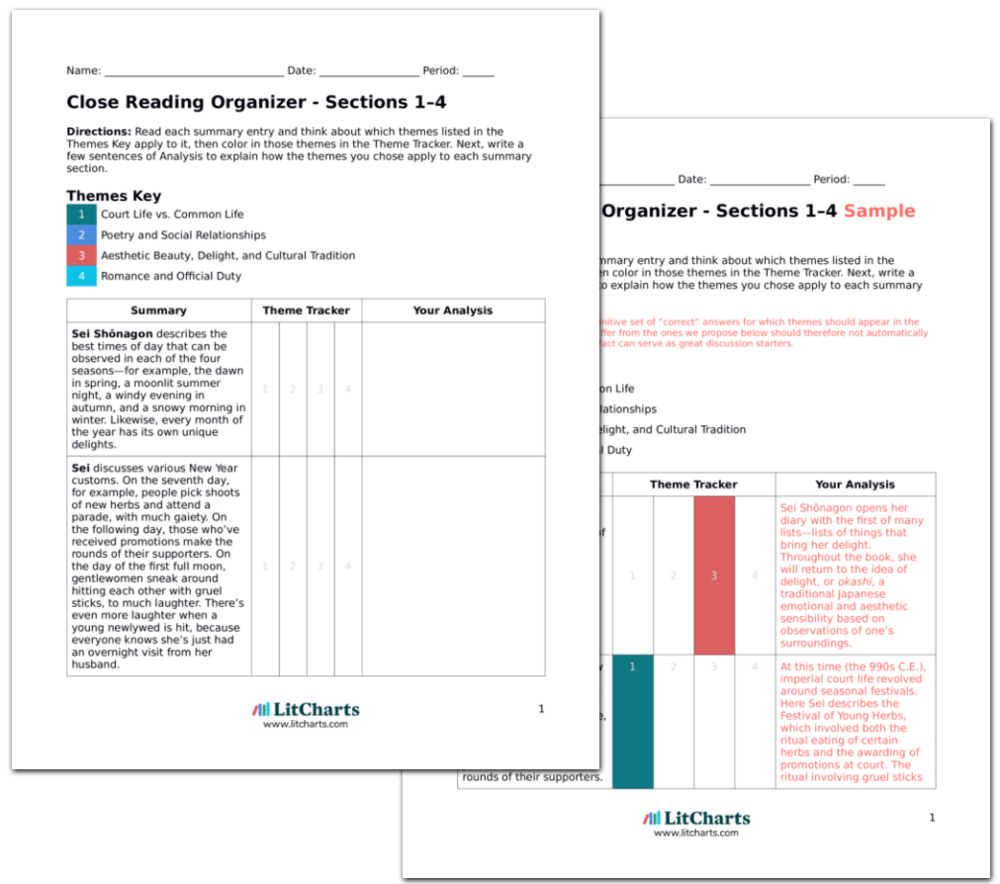