Download this LitChart! (PDF)
Teachers and parents! Struggling with distance learning? Our Teacher Edition on The Plot Against America can help.

Welcome to the LitCharts study guide on Philip Roth's The Plot Against America. Created by the original team behind SparkNotes, LitCharts are the world's best literature guides.

The Plot Against America: Introduction

A concise biography of Philip Roth plus historical and literary context for The Plot Against America.

The Plot Against America: Plot Summary

A quick-reference summary: The Plot Against America on a single page.

In-depth summary and analysis of every chapter of The Plot Against America. Visual theme-tracking, too.

The Plot Against America: Themes

Explanations, analysis, and visualizations of The Plot Against America's themes.

The Plot Against America: Quotes

The Plot Against America's important quotes, sortable by theme, character, or chapter.

The Plot Against America: Characters

Description, analysis, and timelines for The Plot Against America's characters.

Description, analysis, and timelines for The Plot Against America's terms.

The Plot Against America: Symbols

Explanations of The Plot Against America's symbols, and tracking of where they appear.

The Plot Against America: Theme Wheel

An interactive data visualization of The Plot Against America's plot and themes.

Born and raised in the Weequahic neighborhood of Newark, New Jersey, Philip Roth grew up in a Jewish family. His parents, Herman and Bess, were both second-generation Americans with roots in Eastern Europe. After graduating from Weequahic High School, Roth attended Rutgers University, Bucknell University, and the University of Chicago, working as an instructor at the University of Chicago’s writing program before going on to teach at the University of Iowa, Princeton, and the University of Pennsylvania. One of the most celebrated—and controversial—writers of the 20th century, Roth rose to prominence with Goodbye, Columbus (1959). Roth’s raw, controversial novel Portnoy’s Complaint (1969) rocketed him to literary celebrity and signaled the earnest start of an unapologetic writing career. Famous for his lusty or lecherous protagonists, Roth’s expansive body of work is often highly autobiographical and rooted in Jewish identity. Some of his most notable novels include American Pastoral, The Human Stain, and Sabbath’s Theater. Roth was the winner of three PEN/Faulkner Awards, two National Book Awards for Fiction, and two National Book Critics Circle Awards. Roth was also awarded the Edward MacDowell Medal by the prestigious MacDowell Colony in 2001, the National Humanities Medal by President Barack Obama in 2011, and the Man Booker International Prize for lifetime achievement later in 2011. Roth held honorary degrees from Bard College, Columbia University, Harvard University, and the Jewish Theological Seminary of America. His work has been widely adapted for film and television. Later in life, Roth controversially stated that his perception of the Jewish experience was that it was “really not interesting,” identifying himself as an “American” before anything else. Roth died in Manhattan in May of 2018 and, according to his final wishes, was buried at the Bard College Cemetery in an atheistic ceremony.
Get the entire The Plot Against America LitChart as a printable PDF.
"My students can't get enough of your charts and their results have gone through the roof." -Graham S.
Download 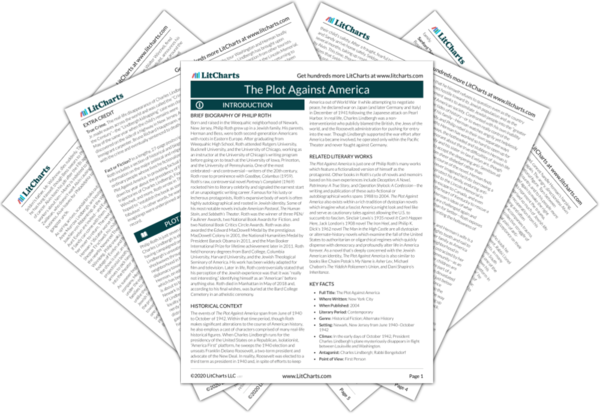 Historical Context of The Plot Against America

The events of The Plot Against America span from June of 1940 to October of 1942. Within that time period, though Roth makes significant alterations to the course of American history, he also employs a cast of characters comprised of many real-life historical figures. When Charles Lindbergh runs for the presidency of the United States on a Republican, isolationist, “America First” platform, he sweeps the 1940 election and unseats Franklin Delano Roosevelt, a two-term president and advocate of the New Deal. In reality, Roosevelt was elected to a third term as president in 1940 and, in spite of efforts to keep America out of World War II while attempting to negotiate peace, he declared war on Japan (and later Germany and Italy) in December of 1941 following the Japanese attack on Pearl Harbor. In real life, Charles Lindbergh was a non-interventionist who publicly blamed the British, the Jews of the world, and the Roosevelt administration for pushing for entry into the war. Though Lindbergh supported the war effort after America became involved, he operated only within the Pacific Theater and never fought against Germany.

Other Books Related to The Plot Against America

The Plot Against America is just one of Philip Roth’s many works which feature a fictionalized version of himself as the protagonist. Other books in Roth’s cycle of novels and memoirs based on his own experiences include Deception: A Novel, Patrimony: A True Story, and Operation Shylock: A Confession—the writing and publication of these auto-fictional or autobiographical works spans 1988 to 2004. The Plot Against America also exists within a rich tradition of dystopian novels which imagine what a fascist America might look and feel like and serve as cautionary tales against allowing the U.S. to succumb to fascism. Sinclair Lewis’s 1935 novel It Can’t Happen Here, Jack London’s 1908 novel The Iron Heel, and Philip K. Dick’s 1962 novel The Man in the High Castle are all dystopian or alternate-history novels which examine the fall of the United States to authoritarian or oligarchical regimes which quickly dispense with democracy and profoundly alter life in America forever. As a novel that’s deeply concerned with the Jewish American identity, The Plot Against America is also similar to books like Chaim Potok’s My Name is Asher Lev, Michael Chabon's The Yiddish Policemen's Union, and Dani Shapiro’s Inheritance.
Key Facts about The Plot Against America

Extra Credit for The Plot Against America

True Crime. The real-life disappearance of Charles Lindbergh Jr. made waves across the world and was called the “Crime of the Century”—the “Lindbergh kidnapping” case was closed in May of the same year when the child’s remains were discovered on the side of a highway in New Jersey. A German immigrant carpenter, Bruno Richard Hauptmann, was charged with the crime and eventually sentenced to death.

Fact or Fiction? In a lengthy, 27-page postscript to the novel, Roth includes a section of historical and biographical information on the major political and religious figures and ordinary people whose lives he fictionalizes in the pages of The Plot Against America. In providing factual information broken down by year about the presidency of FDR and the career trajectories of Charles Lindbergh, Fiorello La Guardia, Walter Winchell, and more, Roth wrote in The New York Times that he hoped to “establish the book as something other than fabulous”—in other words, he wanted to show how his fictional imaginings were underpinned and steered by the historical record. 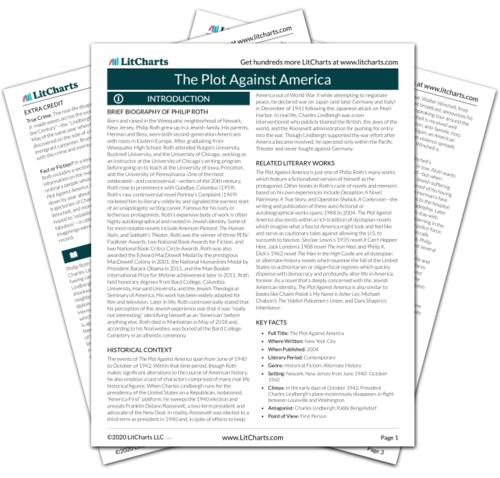 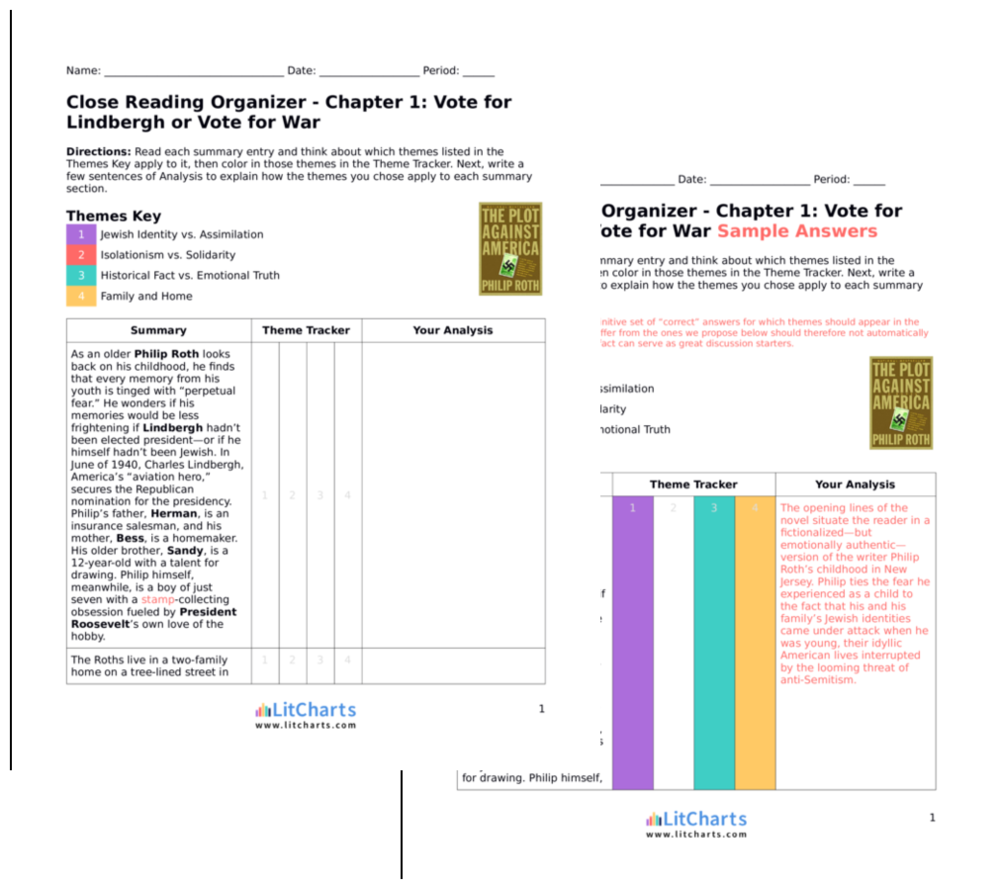