In The Power of Habit, journalist Charles Duhigg argues that habits are the foundation of human behavior. By truly understanding these habits, Duhigg believes, people can learn to master them—which gives them the power to control their own lives and shape their own identities. In his prologue, Duhigg introduces this principle with the story of Lisa Allen, a woman who turned her entire life around after a divorce and a fateful trip to Egypt. For twenty years, Allen smoked, drank, and ate too much; she never exercised, was deep in debt, and kept losing jobs. But after a flash of inspiration, she changed all of these habits in just a few months, starting with the keystone habit of smoking. Scientists scanned her brain and discovered that she had built new neural pathways for her new, healthy, disciplined habits. In other words, she actually reprogrammed her brain by changing her habits—and Duhigg wants to teach his readers to do the same. He argues that, whether they live ordinary lives or face critical, high-stress situations like the war in Iraq, people are only as effective as their habits. So are organizations. While habit change isn’t always easy, Duhigg believes that it’s always possible. And he knows that readers can greatly simplify the process by following a few simple principles.

In his first chapter, Duhigg explains how habits work in the brain. He tells the story of Eugene Pauly, an elderly man who almost entirely loses his memory after getting a dangerous infection in his brain. The neuroscientist Larry Squire discovered that, even though Pauly can’t remember anything, he still retains all his habits. Thus, Pauly can go to the bathroom even though he doesn’t know where it is. When Squire repeatedly gives Pauly the same game—he has to chose the “correct” one of a pair of objects—Pauly consistently gets better, but always thinks he’s playing it for the first time. Pauly’s disorder shows that the part of the brain that regulates habits is totally different from the part that regulates memory. In fact, neuroscientists know that structures deep inside the brain, like the basal ganglia, are designed to help save energy by turning frequently-repeated actions into routines. The brain then learns to start these routines after specific cues. And after a routine is done, the brain finds a reward—which can be sensory, emotional, or just psychological. This three-part loop of cue, routine, and reward is the foundation for all habits.

Next, Duhigg examines how people—and especially marketers—can use this three-part loop to create new habits. The advertiser Claude C. Hopkins famously popularized toothbrushing in the U.S. by teaching Americans a habit loop: when they feel a dirty film on their teeth (cue), they should brush (routine), which will leave them feeling and looking clean (reward). Similarly, marketers turned Febreze into a bestselling product by marketing it as the “final touch” (or reward) in a cleaning habit. As people started to associate the smell of Febreze with a clean room, they started to crave it—and buy more and more. Duhigg argues that the key to forming sustainable habits is building this kind of craving. Neuroscientist Wolfram Schultz’s research on monkeys supports this theory: once the brain learns to associate the cue with the reward, it develops a craving, which makes the whole habit addictive.

In his third chapter, Duhigg introduces what he calls the Golden Rule of habit change: to replace old habits with new ones, people should keep the same cue and reward, but change the routine. The star football coach Tony Dungy did this by teaching his players to automatically get into formation whenever they saw the other side. Similarly, the alcoholic Bill Wilson founded Alcoholics Anonymous when he realized that new habits—like prayer, attending support groups, and talking with trusted sponsors—can give people the same feeling of sociability and relaxation that they used to seek from alcohol. But replacing old routines with new ones is easier said than done. If they don’t sincerely believe in their own ability to change, people often relapse into bad habits.

In the next four chapters, Duhigg focuses on habits’ consequences for organizations. First, he explains how organizations can completely transform themselves by starting with one small but significant keystone habit. For instance, when he became the CEO of the aluminum manufacturer Alcoa, Paul O’Neill focused not on profits, innovation, or growth, but on worker safety. By getting everyone to work together on safety, he proved that change was possible, bridged longstanding conflicts between different groups within the company, and opened up lines of communication with factory workers—who often had the best ideas for improving productivity.

Next, Duhigg examines how people can become more successful by turning willpower into a habit. Starbucks famously bases its employee training program on teaching discipline, and it works—employees like Travis Leach credit Starbucks with teaching them key life skills. In fact, psychologist Mark Muraven’s experiments show that it’s possible to learn willpower over time. The key is to make it into a habit.

In his sixth chapter, Duhigg looks at how organizations transform themselves during crises. After a series of botched surgeries, Rhode Island Hospital faced a media firestorm and publicly committed to changing the toxic work culture that led to the mistakes. Similarly, when nobody managed to stop a devastating fire in the London subway, the city government reorganized the agencies that managed the subway and trained new staff to address safety issues. Duhigg concludes that crises can actually help organizations advance by motivating them to make needed changes.

Then, Duhigg discusses how companies manipulate their consumers’ habits. For instance, Target hired the statistician Andrew Pole to analyze shoppers’ purchases and determine if they are pregnant. His algorithm was successful, but Target didn’t want customers to know that it was surveilling them, so it had to mix its personalized coupons in with random ones. Similarly, to popularize the song “Hey Ya!,” radio stations decided to sandwich it between two songs that listeners already knew and loved. The lesson from these two examples is clear: to succeed, habit manipulation has to be subtle.

In his final two chapters, Duhigg examines the social and moral implications of habit change. First, he looks at the civil rights movement. He argues that the 1955 Montgomery bus boycott was successful because of the social habits that drove it. Rosa Parks’s wide range of friends made a point of defending her, and then the Black community stuck with the boycott because of social pressure. When Dr. Martin Luther King, Jr., came to the movement’s head, his leadership convinced people around the country to adopt a new set of values and habits, like loving the enemy and protesting nonviolently. Just as King built a broad social movement by changing people’s habits, Duhigg argues, the Baptist pastor Rick Warren built an enormous megachurch by appealing to changed habits. These examples show how habits are really contagious—when some people’s habits change, others tend to follow. Sometimes, this process can transform entire societies.

In his last chapter, Duhigg asks a critical question: “Are We Responsible for Our Habits?” He compares Angie Bachmann, a stay-at-home mom who develops an uncontrolled gambling addiction and bankrupts her family, to Brian Thomas, a British man with a history of sleepwalking who accidentally kills his wife in the middle of the night during an unconscious episode called a night terror. Duhigg agrees with the courts’ ruling on Bachmann and Thomas’s cases: Bachmann is responsible for her behavior because she knew about it and had the power to stop it, while Thomas isn’t responsible for his because he couldn’t have changed it. While habits aren’t the same as ordinary decisions, Duhigg reiterates, people can still control them if they take the right steps to understand and replace the habit loop. This brings the book full circle: Duhigg concludes that people have not only the power to build good habits and eradicate bad ones, but also the moral responsibility to do so. In a brief afterword, he offers several examples of people who have succeeded after reading his book. He thinks that anyone can do the same if they truly want to, if they learn about the research, and if they put their mind to it. 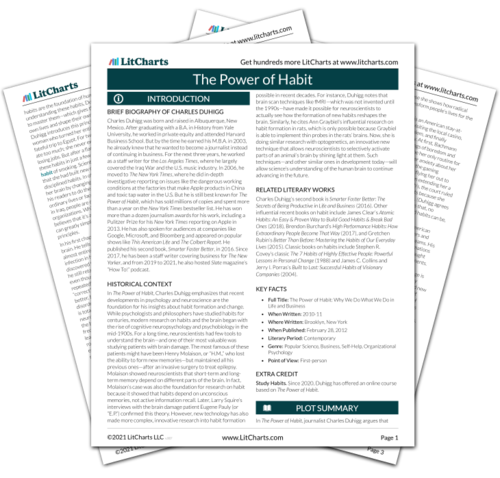 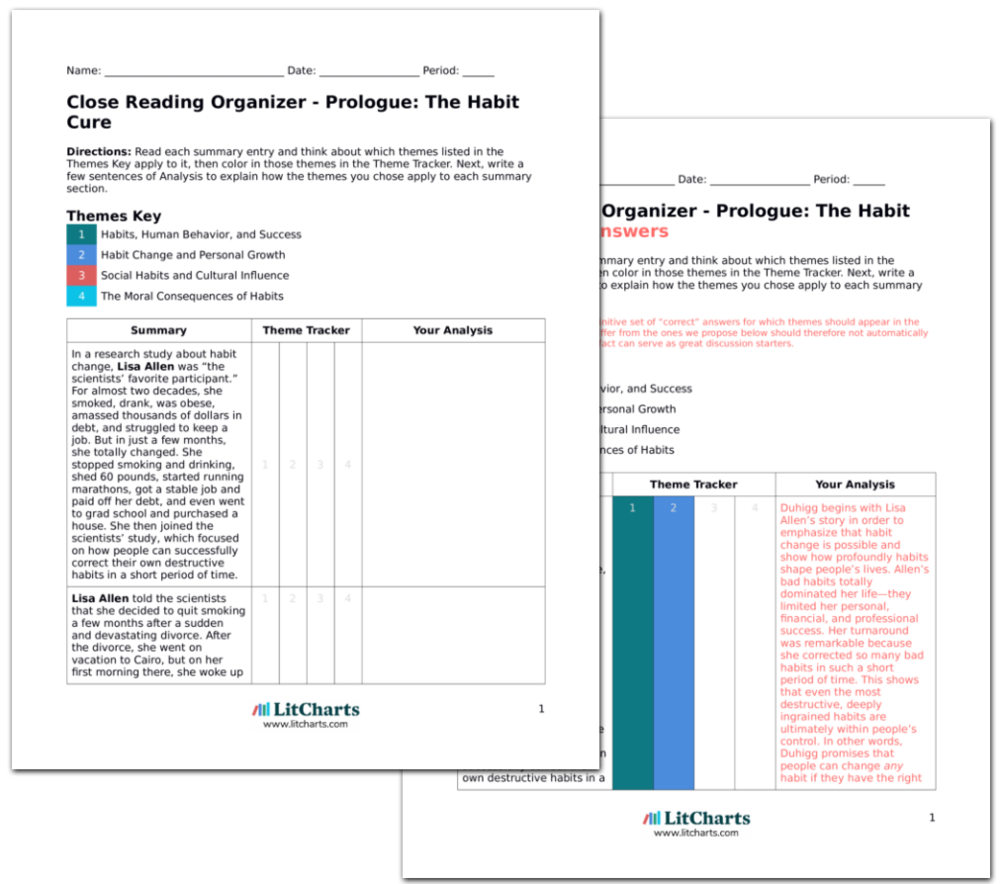