Download this LitChart! (PDF)
Teachers and parents! Struggling with distance learning? Our Teacher Edition on The Princess Bride can help.

Welcome to the LitCharts study guide on William Goldman's The Princess Bride. Created by the original team behind SparkNotes, LitCharts are the world's best literature guides.

A concise biography of William Goldman plus historical and literary context for The Princess Bride.

A quick-reference summary: The Princess Bride on a single page.

In-depth summary and analysis of every chapter of The Princess Bride. Visual theme-tracking, too.

Explanations, analysis, and visualizations of The Princess Bride's themes.

Description, analysis, and timelines for The Princess Bride's characters.

Explanations of The Princess Bride's symbols, and tracking of where they appear.

An interactive data visualization of The Princess Bride's plot and themes.

Goldman was born and raised in Chicago. His father was a successful businessman while Goldman was very young, but due to alcoholism he lost his business and committed suicide when Goldman was in high school. Goldman attended Oberlin College and soon after graduation was drafted into the Army. Following his discharge, he earned his Master of Arts at Columbia University. Throughout college, Goldman edited his school literary magazine and took writing courses, but even his own magazine wouldn’t publish his anonymously submitted written work. After helping his brother and roommate with several scripts for musicals, Goldman wrote his first novel, The Temple of Gold, and his career took off from there. He wrote novels, plays, and screenplays, most notably Butch Cassidy and the Sundance Kid, for which he won an Oscar for Best Original Screenplay in 1969. Goldman was openly critical of the film industry and wrote several nonfiction books and memoirs about his experiences with it. As he writes in The Princess Bride, it is true that he bought back his own screenplay when nobody would greenlight it after the novel's publication, and he was very involved in the filming and casting process. He was married for 30 years but divorced in 1991. Goldman died in 2018 after suffering pneumonia and complications from colon cancer.
Get the entire The Princess Bride LitChart as a printable PDF.
"My students can't get enough of your charts and their results have gone through the roof." -Graham S.
Download 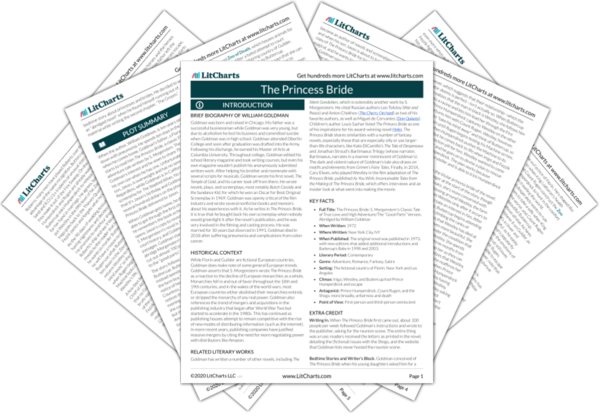 Historical Context of The Princess Bride

While Florin and Guilder are fictional European countries, Goldman does make note of some general European trends. Goldman asserts that S. Morgenstern wrote The Princess Bride as a reaction to the decline of European monarchies as a whole. Monarchies fell in and out of favor throughout the 18th and 19th centuries, and in the wakes of the world wars, most European countries either abolished their monarchies entirely or stripped the monarchy of any real power. Goldman also references the trend of mergers and acquisitions in the publishing industry that began after World War Two but started to accelerate in the 1980s. This has continued as publishing houses attempt to remain competitive with the rise of new modes of distributing information (such as the internet). In more recent years, publishing companies have justified massive mergers by citing the need for more negotiating power with distributors like Amazon.

Other Books Related to The Princess Bride

Goldman has written a number of other novels, including The Silent Gondoliers, which is ostensibly another work by S. Morgenstern. He cited Russian authors Leo Tolstoy (War and Peace) and Anton Chekhov (The Cherry Orchard) as two of his favorite authors, as well as Miguel de Cervantes (Don Quixote). Children's author Louis Sachar listed The Princess Bride as one of his inspirations for his award-winning novel Holes. The Princess Bride shares similarities with a number of fantasy novels, especially those that are especially silly or use larger-than-life characters, like Kate DiCamillo's The Tale of Despereaux and Jonathan Stroud's Bartimaeus Trilogy (whose narrator, Bartimaeus, narrates in a manner reminiscent of Goldman’s). The dark and violent nature of Goldman's tale also draws on motifs and elements from Grimm’s Fairy Tales. Finally, in 2014, Cary Elwes, who played Westley in the film adaptation of The Princess Bride, published As You Wish: Inconceivable Tales from the Making of The Princess Bride, which offers interviews and an insider look at what went into making the movie.
Key Facts about The Princess Bride

Extra Credit for The Princess Bride

Writing In. When The Princess Bride first came out, about 100 people per week followed Goldman’s instructions and wrote to the publisher, asking for the reunion scene. The entire thing was a ruse; readers received the letters as printed in the novel, detailing the (fictional) issues with the Shogs, and the website that Goldman lists never hosted the reunion scene.

Bedtime Stories and Writer’s Block. Goldman conceived of The Princess Bride when his young daughters asked him for a bedtime story about princesses and brides. He decided to write an “abridged novel” when he found himself running out of material while writing the second chapter, “The Groom.” 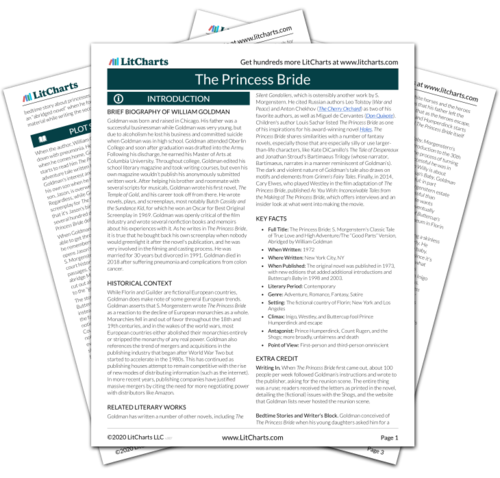 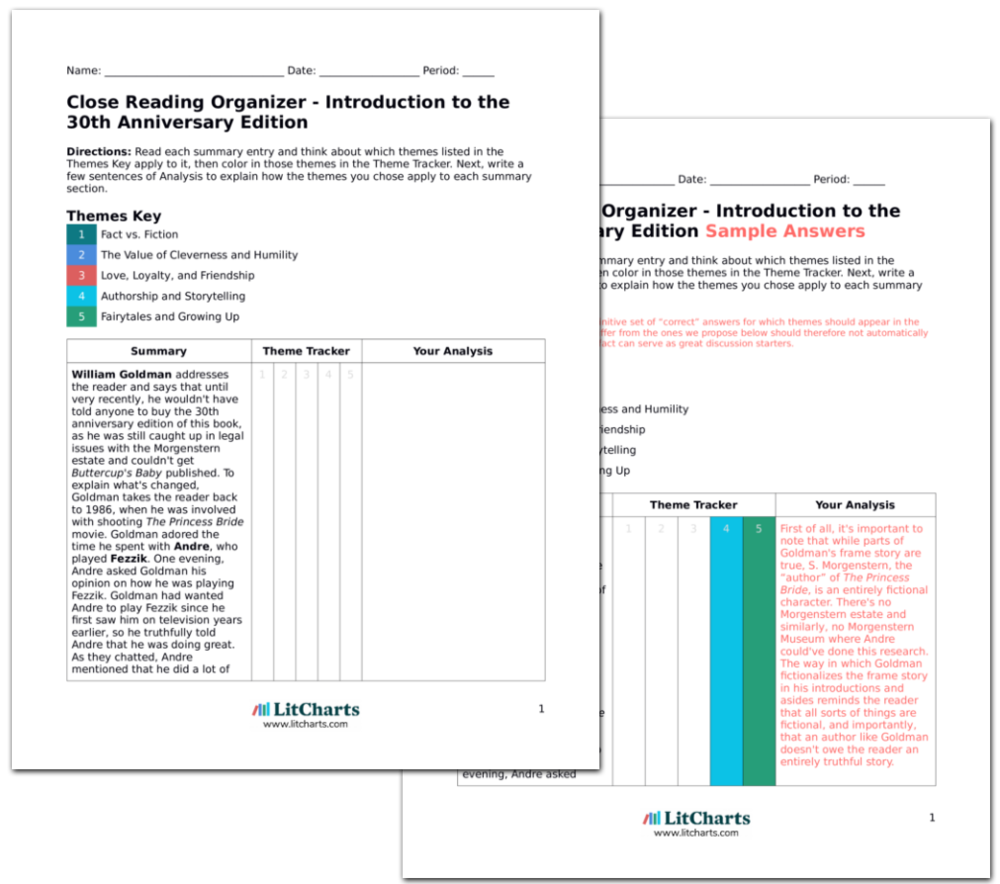