Download this LitChart! (PDF)
Teachers and parents! Struggling with distance learning? Our Teacher Edition on The Rain Horse can help.

Welcome to the LitCharts study guide on Ted Hughes's The Rain Horse. Created by the original team behind SparkNotes, LitCharts are the world's best literature guides.

A concise biography of Ted Hughes plus historical and literary context for The Rain Horse.

A quick-reference summary: The Rain Horse on a single page.

In-depth summary and analysis of every of The Rain Horse. Visual theme-tracking, too.

Explanations, analysis, and visualizations of The Rain Horse's themes.

The Rain Horse's important quotes, sortable by theme, character, or .

Description, analysis, and timelines for The Rain Horse's characters.

Explanations of The Rain Horse's symbols, and tracking of where they appear.

An interactive data visualization of The Rain Horse's plot and themes.

Ted Hughes was the youngest of three children born to working-class parents in Yorkshire. From an early age, he was interested in animals. This fascination persist throughout his life, and animals become a hallmark of his later writing. He won a scholarship to Cambridge where he studied English, anthropology, and archeology. In 1956, he met American poet Sylvia Plath; the two were married within four months and had two children together. Hughes and Plath’s troubled marriage, Plath’s death by suicide, and Hughes’s subsequent position as executor of her literary estate are controversial parts of his legacy. During a career that spanned more than four decades, Hughes was a prolific poet, editor, translator, essayist, and children’s book author; he published more than 15 collections of poetry; 18 children’s books; and many short stories, plays, and essays. He was appointed poet laureate of Great Britain in 1984, a position he held until his death of a heart attack in 1998. In his final years, he returned to the countryside, cultivating a farm called Moortown in Devon and becoming involved in local nature conservation efforts.
Get the entire The Rain Horse LitChart as a printable PDF.
"My students can't get enough of your charts and their results have gone through the roof." -Graham S.
Download 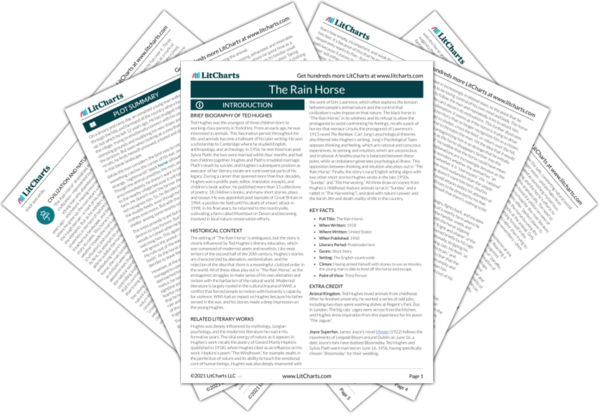 Historical Context of The Rain Horse

The setting of “The Rain Horse” is ambiguous, but the story is clearly influenced by Ted Hughes’s literary education, which was composed of modernist poets and novelists. Like most writers of the second half of the 20th century, Hughes’s stories are characterized by alienation, existentialism, and the rejection of the idea that there is a meaningful, civilized order in the world. All of these ideas play out in “The Rain Horse,” as the protagonist struggles to make sense of his own alienation and reckon with the barbarism of the natural world. Modernist literature is largely rooted in the cultural trauma of WWI, a conflict that forced people to reckon with humanity’s capacity for violence. WWI had an impact on Hughes because his father served in the war, and his stories made a deep impression on the young Hughes.

Other Books Related to The Rain Horse

Hughes was deeply influenced by mythology, Jungian psychology, and the modernist literature he read in his formative years. The vital energy of nature as it appears in Hughes’s work recalls the poetry of Gerard Manly Hopkins (published in 1918), whom Hughes cited as an influence on his work. Hopkins’s poem “The Windhover,” for example, exalts in the perfection of nature and its ability to touch the emotional core of human beings. Hughes was also deeply enamored with the work of D.H. Lawrence, which often explores the tension between people’s animal nature and the control that civilization’s rules impose on that nature. The black horse in “The Rain Horse,” in its wildness and its refusal to allow the protagonist to avoid confronting his feelings, recalls a pack of horses that menace Ursula, the protagonist of Lawrence’s 1915 novel The Rainbow. Carl Jung’s psychological theories also filtered into Hughes’s writing: Jung’s Psychological Types opposes thinking and feeling, which are rational and conscious experiences, to sensing and intuition, which are unconscious and irrational. A healthy psyche is balanced between these poles, while an imbalance generates psychological illness. This opposition between thinking and intuition also plays out in “The Rain Horse.” Finally, the story’s rural English setting aligns with two other short stories Hughes wrote in the late 1950s, “Sunday” and “The Harvesting.” All three draw on scenes from Hughes’s childhood, feature animals (a rat in “Sunday” and a rabbit in “The Harvesting”), and deal with nature’s power and the harsh, life-and-death reality of life in the country.
Key Facts about The Rain Horse

Extra Credit for The Rain Horse

Animal Kingdom. Ted Hughes loved animals from childhood. After he finished university, he worked a series of odd jobs, including two days spent washing dishes at Regent’s Park Zoo in London. The big cats’ cages were across from the kitchen, and Hughes drew inspiration from this experience for his poem “The Jaguar.”

Joyce Superfan. James Joyce’s novel Ulysses (1922) follows the movements of Leopold Bloom around Dublin on June 16, a date Joyce’s fans have dubbed Bloomsday. Ted Hughes and Sylvia Plath were married on June 16, 1956, having specifically chosen “Bloomsday” for their wedding. 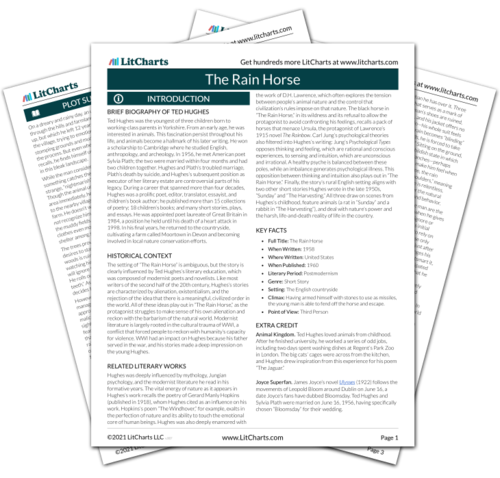 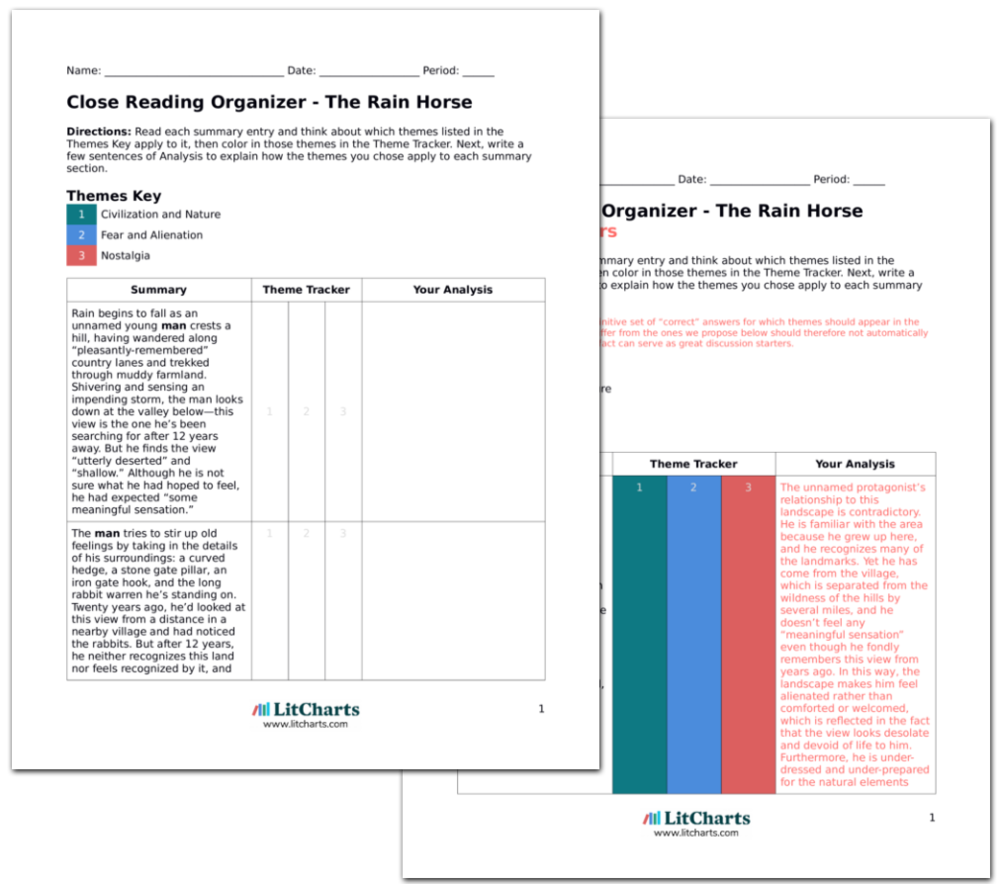