Download this LitChart! (PDF)
Teachers and parents! Struggling with distance learning? Our Teacher Edition on The Rape of the Lock can help.

Get LitCharts A+
LitCharts assigns a color and icon to each theme in The Rape of the Lock, which you can use to track the themes throughout the work.

Alexander Pope’s “The Rape of the Lock” recounts a seemingly trivial episode of 18th-century royal court life. Belinda, a beautiful and charming young woman, spends a day at court where she encounters the Baron, an aristocrat greatly taken with her beauty. The Baron snips off one of the two large curls into which Belinda has styled her hair, and this prompts her to begin a kind of courtly war, demanding the Baron return the lock of hair. From here, the narrative becomes increasingly silly, as the courtiers ultimately discover that the lock is no longer in the Baron’s possession and has been transformed into a constellation in the sky above. Throughout the poem, Pope references the tradition of epic poetry—poems about serious conflict and heroism—to show, by comparison, how trivial and vain court life is.

One of the most important points to note about the composition of the poem is Pope’s choice of meter: heroic couplets (pairs of rhyming lines in iambic pentameter). These are traditionally associated with works in the epic tradition, such as Homer’s Iliad and Odyssey and Virgil’s Aeneid. This misleadingly suggests to the reader that the subject matter of “The Rape of the Lock” will be equally heroic, and thus the poem’s meter ironically emphasizes the triviality of the narrative. This is because epic poems typically recount profound, high-stakes struggles, such as clashes between cities, between mankind and the gods, and among the gods themselves. Epics are therefore normally seen as an extremely lofty poems which deal with the most serious of events. While classical epics were not composed in heroic couplets, 18th-century translations of the classics often were, and Pope’s own translations of Homer are prime examples. This means that Pope’s opting to use heroic couplets to focus on the trivial story of a woman’s ruined hairdo in “The Rape of the Lock” was designed to strike contemporary readers as clearly ridiculous. Instead of encountering an epic poem about noble warriors and famous battles, the reader is presented with an obviously unimportant incident about the loss of a lock of hair.

Pope further emphasizes the contrast between the loftiness of the style and the silliness of the poem’s narrative by drawing comparisons between his own characters and figures from the epic tradition. For instance, at the beginning of Canto V, after Belinda’s lock has been cut off, Pope compares his characters to those in Virgil’s Aeneid. The Baron is conflated with Aeneas (“the Trojan”), Thalestris with Anna, and Belinda with Dido: “But fate and Jove had stopped the Baron’s ears. / In vain Thalestris with reproach assails, / For who can move when fair Belinda fails? / Not half so fixed the Trojan could remain, / While Anna begged and Dido raged in vain.” Here, Pope is referencing Book IV of the Aeneid, in which Venus and Juno influence Aeneas, a refugee Trojan prince, and Dido, queen of Carthage, to become lovers. Aeneas cannot stay in Carthage, however, as it is his destiny to sail to Italy and found Rome. He is famously unmoved by Dido’s rage or by her sister Anna’s protestations, leading Dido to take her own life. This comparison between Belinda’s feelings, lamenting her lost lock of hair (which will, of course, grow back), and Dido’s, on the verge of suicide, is humorously misaligned, poking fun at the relative silliness of Belinda’s idea of suffering.

Finally, in other places, Pope directly parodies portions of his own translations of Homer, to draw a close comparison between the intensity of battle and the triviality of court culture. For instance, the line, “Where wigs with wigs, with sword-knots sword-knots strive, / Beaux banish beaux, and coaches coaches drive,” echoes Pope’s own translation of the Iliad, 4.508–9: “Now Shield with Shield, with Helmet Helmet clos’d, / To Armour Armour, Lance to Lance oppos’d.” This parallel highlights just how unimportant these courtly activities are, as Pope draws a direct comparison between the noble activities of Homeric men and the vain activities performed by his own characters. Instead of fighting to the death with weapons (“Shield”; “Helmet”; “Armour”; “Lance”), the men at court merely compete to be the favourites of various ladies, as “Beaux banish beaux.” And instead of fighting with swords, these men compete to see who has the most decorative “sword-knot,” a ribbon or tassel attached to the hilt of a sword. For these men, as the “sword-knots” symbolize, looking good is more important than actually having any skill in combat.

Thus, Pope juxtaposes his use of epic meter and classical references with the silliness of the poem’s underlying narrative for comic effect. In doing so, he effectively mocks the importance afforded to transient expressions of beauty at court. By adopting an epic meter and drawing comparisons between Homeric figures and his own characters, he is able to emphasize that the concerns and duties of court life are ultimately insubstantial and appear downright silly alongside the great struggles depicted in epic poetry.

The Triviality of Court Life ThemeTracker

The ThemeTracker below shows where, and to what degree, the theme of The Triviality of Court Life appears in each canto of The Rape of the Lock. Click or tap on any chapter to read its Summary & Analysis.
How often theme appears:
canto length:
Canto
Canto I
1
Canto II
2
Canto III
3
Canto IV
4
Canto V
5
Get the entire The Rape of the Lock LitChart as a printable PDF.
"My students can't get enough of your charts and their results have gone through the roof." -Graham S.
Download 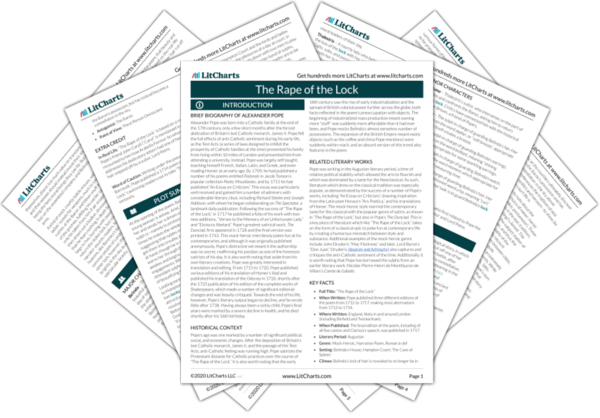 Below you will find the important quotes in The Rape of the Lock related to the theme of The Triviality of Court Life.
Canto I Quotes

What dire offense from amorous causes springs,
What mighty contests arise from trivial things,
I sing—This verse to Caryl, Muse! is due;
[…] Say what strange motive, Goddess! could compel
A well-bred Lord to assault a gentle Belle?

Page Number and Citation: I.1-8
Explanation and Analysis:

With varying vanities, from every part,
They shift the moving toyshop of their heart;
Where wigs with wigs, with sword-knots sword-knots strive,
Beaux banish beaux, and coaches coaches drive.
This erring mortals levity may call,
Oh blind to truth! the Sylphs contrive it all.

Page Number and Citation: I.99-104
Explanation and Analysis:

For this, ere Phoebus rose, he had implored
Propitious heaven, and every power adored,
But chiefly Love—to Love an altar built,
Of twelve vast French romances, neatly gilt.
There lay three garters, half a pair of gloves;
And all the trophies of his former loves.
With tender billets-doux he lights the pyre,
And breathes three amorous sighs to raise the fire

Whether the nymph shall break Diana’s law,
Or some frail China jar receive a flaw,
Or stain her honor, or her new brocade,
Forget her prayers, or miss a masquerade,
Or lose her heart, or necklace, at a ball;
Or whether Heaven has doomed that Shock must fall.

Behold, four Kings in majesty revered,
With hoary whiskers and a forky beard;
And four fair Queens whose hands sustain a flower,
The expressive emblem of their softer power;
Four Knaves in garbs succinct, a trusty band,
Caps on their heads, and halberts in their hand;
And particolored troops, a shining train,
Draw forth to combat on the velvet plain.

The peer now spreads the glittering forfex wide,
To enclose the lock; now joins it, to divide.
Even then, before the fatal engine closed,
A wretched Sylph too fondly interposed;
Fate urged the shears, and cut the Sylph in twain
(But airy substance soon unites again),
The meeting points the sacred hair dissever
From the fair head, for ever and for ever!

But fate and Jove had stopped the Baron’s ears.
In vain Thalestris with reproach assails,
For who can move when fair Belinda fails?
Not half so fixed the Trojan could remain,
While Anna begged and Dido raged in vain.

All side in parties, and begin the attack;
Fans clap, silks rustle, and tough whalebones crack;
Heroes’ and heroines’ shouts confusedly rise,
And bass and treble voices strike the skies.
No common weapons in their hands are found,
Like gods they fight, nor dread a mortal wound.
So when bold Homer makes the gods engage,
And heavenly breasts with human passions rage;
’Gainst Pallas, Mars; Latona, Hermes arms;
And all Olympus rings with loud alarms. 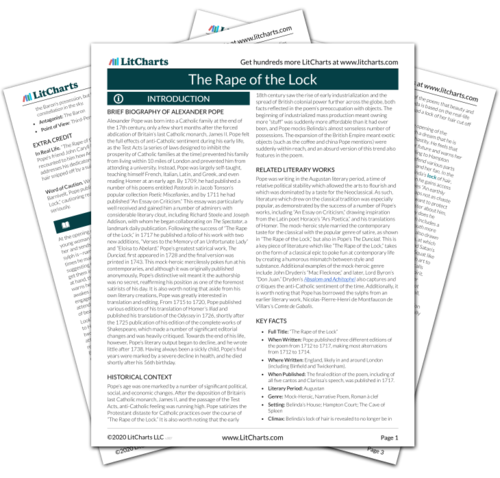 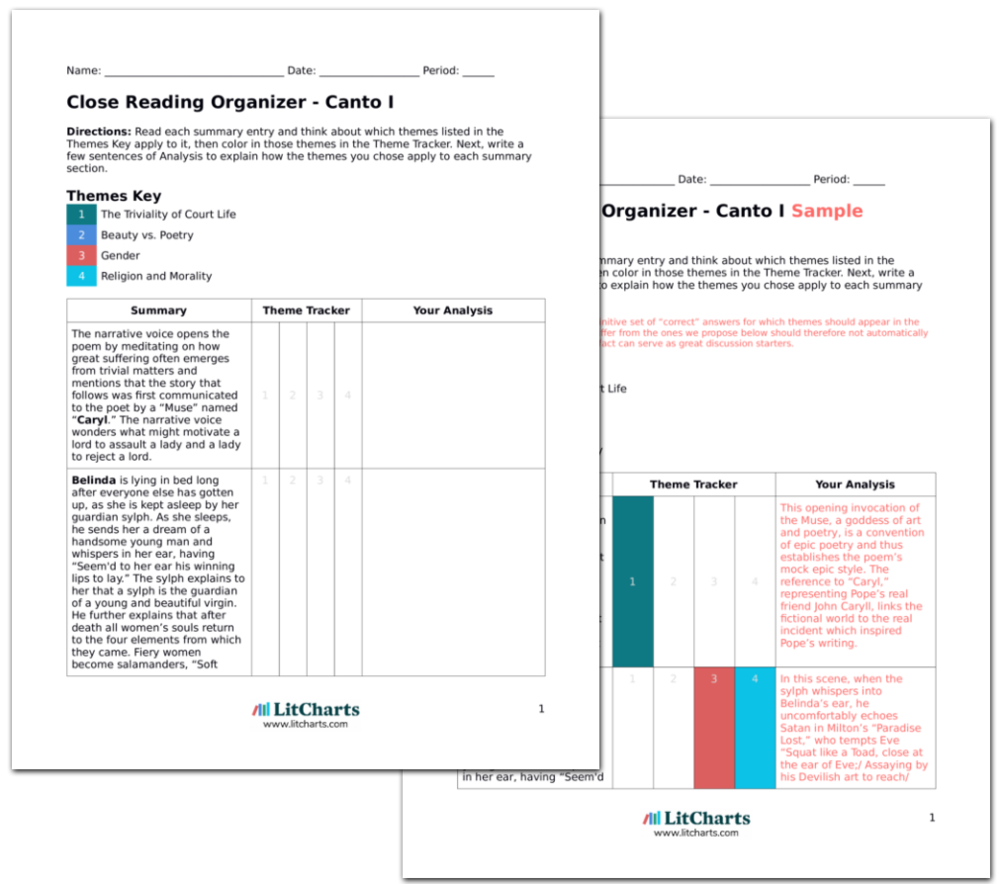