Download this LitChart! (PDF)
Teachers and parents! Struggling with distance learning? Our Teacher Edition on The Real Thing can help.

Welcome to the LitCharts study guide on Henry James's The Real Thing. Created by the original team behind SparkNotes, LitCharts are the world's best literature guides.

A concise biography of Henry James plus historical and literary context for The Real Thing.

A quick-reference summary: The Real Thing on a single page.

In-depth summary and analysis of every of The Real Thing. Visual theme-tracking, too.

Explanations, analysis, and visualizations of The Real Thing's themes.

The Real Thing's important quotes, sortable by theme, character, or .

Description, analysis, and timelines for The Real Thing's characters.

Explanations of The Real Thing's symbols, and tracking of where they appear.

An interactive data visualization of The Real Thing's plot and themes.

Henry James was born on April 15, 1843 to a well-to-do family in New York City. His father, a philosopher and lecturer, had many scholarly friends and acquaintances who frequently visited the James’ household, which introduced Henry to literary society from a young age. The family often moved between the United States, France, England, and Switzerland, so James studied at various schools with the aid of private tutors. He briefly attended Harvard Law School but quit to pursue writing. His career started with stories and reviews featured in multiple periodicals, including The Atlantic Monthly, before he published his first novel (Watch and Ward) in 1871. A few years later, he moved to Europe, where he would reside for the rest of his life, excepting a few trips to the United States. While living in France, he met many famous realist and naturalist writers whose work influenced his writing. Many of James’s stories and novels are written in a realist style, which is to say that they are focused on depicting life as is, without embellishments or supernatural forces. He later moved to England, where he immersed himself in the local social life. James never married, and today is widely believed to have been homosexual, although this was a well-guarded secret from his friends and family. In 1878, he gained international fame with his novel Daisy Miller, and further established his renown with his 1881 masterpiece The Portrait of a Lady. After a rather unsuccessful attempt at playwriting, James returned to writing novels and essays that continued to solidify his critical reputation, although his readership was generally modest in his lifetime. James became a British citizen in 1915, shortly before he died of pneumonia in 1916.
Get the entire The Real Thing LitChart as a printable PDF.
"My students can't get enough of your charts and their results have gone through the roof." -Graham S.
Download 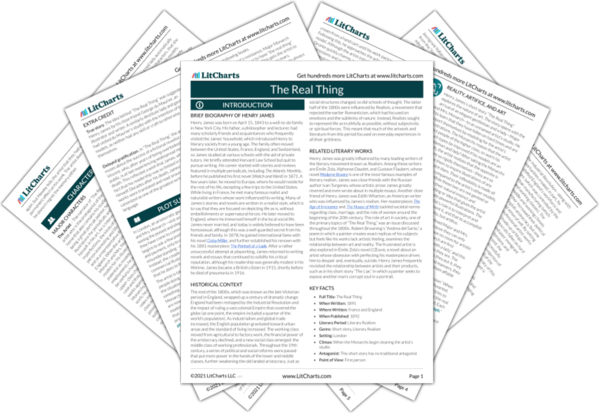 Historical Context of The Real Thing

The end of the 1800s, which was known as the late Victorian period in England, wrapped up a century of dramatic change. England had been reshaped by the Industrial Revolution and the impact of ruling a vast colonial Empire that covered the globe (at one point, the empire included a quarter of the world’s population). As industrialism and global trade increased, the English population gravitated toward urban areas and the standard of living increased. The working class moved from agricultural to factory work, the financial power of the aristocracy declined, and a new social class emerged: the middle class of working professionals. Throughout the 19th century, a series of political and social reforms were passed that put more power in the hands of the lower and middle classes, further weakening the old landed aristocracy. Just as social structures changed, so did schools of thought. The latter half of the 1800s were influenced by Realism, a movement that rejected the earlier Romanticism, which had focused on emotions and the sublimity of nature. Instead, Realists sought to represent life as truthfully as possible, without subjectivity or spiritual forces. This meant that much of the artwork and literature from this period focused on everyday experiences in all their grittiness.

Other Books Related to The Real Thing

Henry James was greatly influenced by many leading writers of the literary movement known as Realism. Among these writers are Émile Zola, Alphonse Daudet, and Gustave Flaubert, whose novel Madame Bovary is one of the most famous examples of literary realism. James was close friends with the Russian author Ivan Turgenev, whose artistic prose James greatly revered and even wrote about in multiple essays. Another close friend of Henry James was Edith Wharton, an American writer who was influenced by James’s realism. Her masterpieces The Age of Innocence and The House of Mirth tackled societal norms regarding class, marriage, and the role of women around the beginning of the 20th century. The role of art in society, one of the primary topics of “The Real Thing,” was an issue discussed throughout the 1800s. Robert Browning’s “Andrea del Sarto,” a poem in which a painter creates exact replicas of his subjects but feels like his works lack artistic feeling, examines the relationship between art and reality. The frustrated artist is also explored in Émile Zola’s novel L’Œuvre, a novel about an artist whose obsession with perfecting his masterpiece drives him to despair and, eventually, suicide. Henry James frequently revisited the relationship between artists and their products, such as in his short story “The Liar,” in which a painter seeks to expose another man’s corrupt soul in a portrait.
Key Facts about The Real Thing

Extra Credit for The Real Thing

True story. The idea behind “The Real Thing” was suggested to Henry James by his close friend George du Maurier, an illustrator and writer. A similarly destitute lady and gentleman had visited du Maurier’s studio with the intention of becoming models, as neither had any skill or craft to otherwise support themselves.

Delayed gratification. In “The Real Thing,” the artist wistfully muses about the success of a fictional novelist named Philip Vincent, who, after years of being overlooked by the general public, is at last experiencing widespread renown before his death. This reflected a wish that James, who struggled with the fact that his readership was so limited in his lifetime, had for himself. Decades after his death, James’s wish was fulfilled: his works were translated and read around the globe, and he was canonized as one of the greatest writers in the English language. 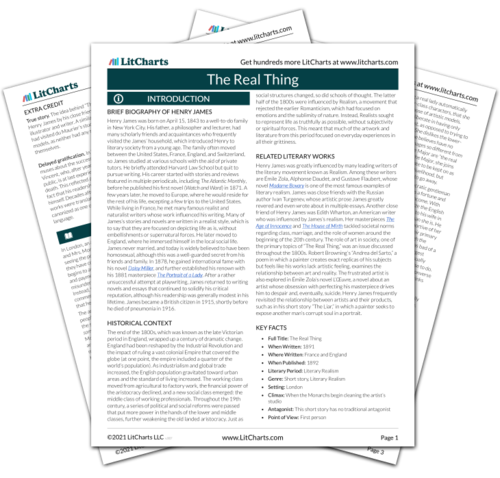 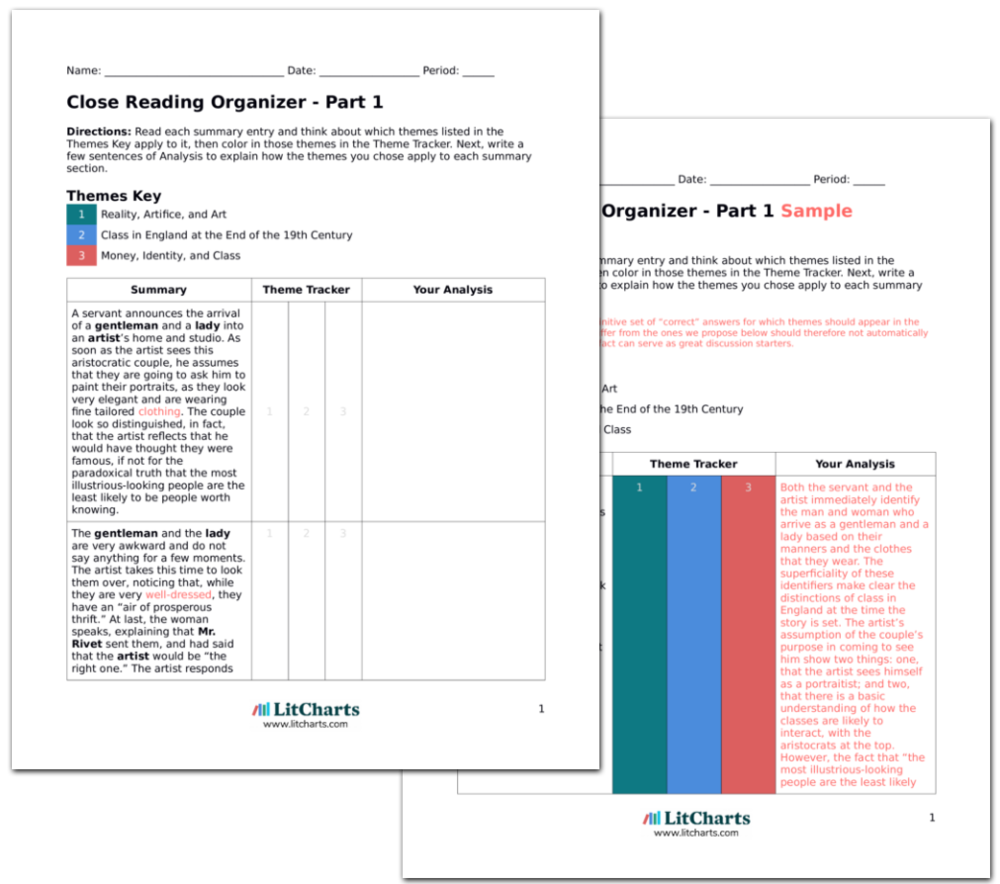