Download this LitChart! (PDF)
Teachers and parents! Struggling with distance learning? Our Teacher Edition on The Remarkable Rocket can help.

Welcome to the LitCharts study guide on Oscar Wilde's The Remarkable Rocket. Created by the original team behind SparkNotes, LitCharts are the world's best literature guides.

A concise biography of Oscar Wilde plus historical and literary context for The Remarkable Rocket.

A quick-reference summary: The Remarkable Rocket on a single page.

In-depth summary and analysis of every of The Remarkable Rocket. Visual theme-tracking, too.

Explanations, analysis, and visualizations of The Remarkable Rocket's themes.

The Remarkable Rocket's important quotes, sortable by theme, character, or .

Description, analysis, and timelines for The Remarkable Rocket's characters.

Explanations of The Remarkable Rocket's symbols, and tracking of where they appear.

An interactive data visualization of The Remarkable Rocket's plot and themes.

Oscar Wilde was one of three children born in Dublin, Ireland, to aristocratic parents, both of whom were well-known intellectuals and artists. As a child, his mother wrote and read to him the poetry of a revolutionary group, the Young Irelanders, instilling him early on with a love of poetry and the written word. Wilde studied Classics at Trinity College Dublin before moving on to study at Oxford. During and after university, Wilde was a prominent advocate of aestheticism and dabbled in a number of literary pursuits as an essayist, lecturer, journalist, and author. He became a renowned public figure in London and abroad because of his sharp wit, eccentricity, and praise of the hedonistic pursuit of pleasure. During this time, he also married Constance Lloyd, the daughter of a wealthy lawyer with whom he had two children. In the 1890s, Wilde reached the height of his writing career, beginning with the publication of his sole novel, The Picture of Dorian Gray. After its success, Wilde turned to writing plays, producing a number of comedies that made light of different aspects of society, as well as his most famous play, the wildly successful The Importance of Being Earnest in 1895. In that same year, Wilde’s secret life as a homosexual was exposed by his lover’s father, which in late Victorian England was a criminal act. Wilde was jailed for indecency and sentenced to two years of hard labor, which he served. Upon his release he immediately fled to Paris, where he wrote his final work, a long poem titled The Ballad of Reading Gaol, a commemoration of his time in prison and reflection on the struggle of the prisoner. During his time in prison and after, Wilde expressed a deepening interest in Catholicism. In Wilde’s last days, penniless and dying of meningitis, his friend and lover Robert Ross called a priest who baptized Wilde into the Catholic Church. Wilde died at the age of 46.
Get the entire The Remarkable Rocket LitChart as a printable PDF.
"My students can't get enough of your charts and their results have gone through the roof." -Graham S.
Download 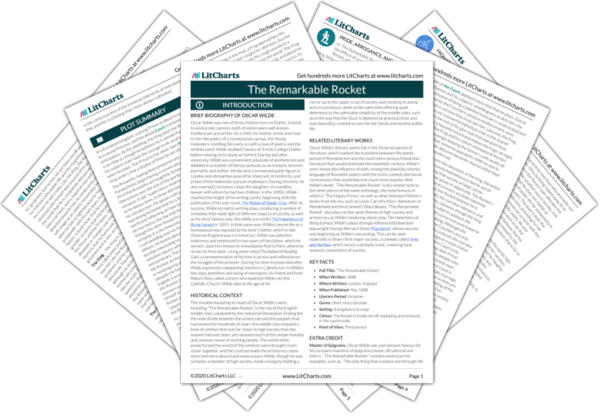 Historical Context of The Remarkable Rocket

The invisible backdrop to much of Oscar Wilde’s work, including “The Remarkable Rocket,” is the rise of the English middle class, catalyzed by the Industrial Revolution. Ending the the wide divide between the aristocrats and the paupers that had existed for hundreds of years, the middle class enjoyed a level of comfort that was far closer to high society than the masses had ever been, yet retained much of the simple morality and common sense of working people. The world of the powerful and the world of the common were brought much closer together, and the contrast made the aristocracy seem more and more absurd and unnecessary. Wilde, though he was certainly a member of high society, made a living by holding a mirror up to the upper crust of society and mocking its pomp and circumstance, while at the same time offering quiet deference to the admirable simplicity of the middle class, such as in the way that the Duck is depicted as practical, kind, and even beautiful, content to care for her family and eschew public life.

Other Books Related to The Remarkable Rocket

Oscar Wilde’s literary works fall in the Victorian period of literature, which marked the transition between the poetic period of Romanticism and the much more serious Edwardian literature that would dominate the twentieth century. Wilde’s work shows the influence of both, mixing the playfully colorful language of Romantic poetry with the ironic comedy and social commentary that would become much more popular after Wilde’s death. “The Remarkable Rocket” is of a similar tone to the other pieces of the same anthology, the most famous of which is “The Happy Prince,” as well as other beloved children’s books from the era, such as Lewis Carroll’s Alice’s Adventures in Wonderland and Anna Sewell’s Black Beauty. “The Remarkable Rocket” also plays on the same themes of high society and aristocracy as Wilde’s enduring classic play, The Importance of Being Earnest. Wilde’s plays strongly influenced Edwardian playwright George Bernard Shaw (Pygmalion), whose success was beginning as Wilde’s was ending. This can be seen especially in Shaw’s first major success, a comedy called Arms and the Man, which struck a similarly ironic, sneering tone towards conventions of society.
Key Facts about The Remarkable Rocket

Extra Credit for The Remarkable Rocket

Master of Epigrams. Oscar Wilde was and remains famous for his constant invention of epigrams (clever, oft satirical one-liners).  “The Remarkable Rocket” contains several prime examples, such as, “The only thing that sustains one through life is the consciousness of the immense inferiority of everybody else, and this is a feeling that I have always cultivated.” 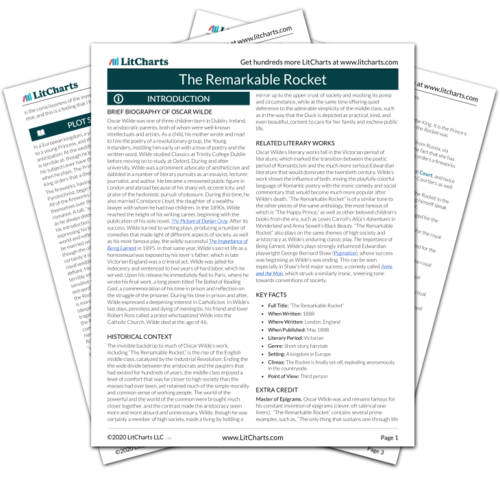 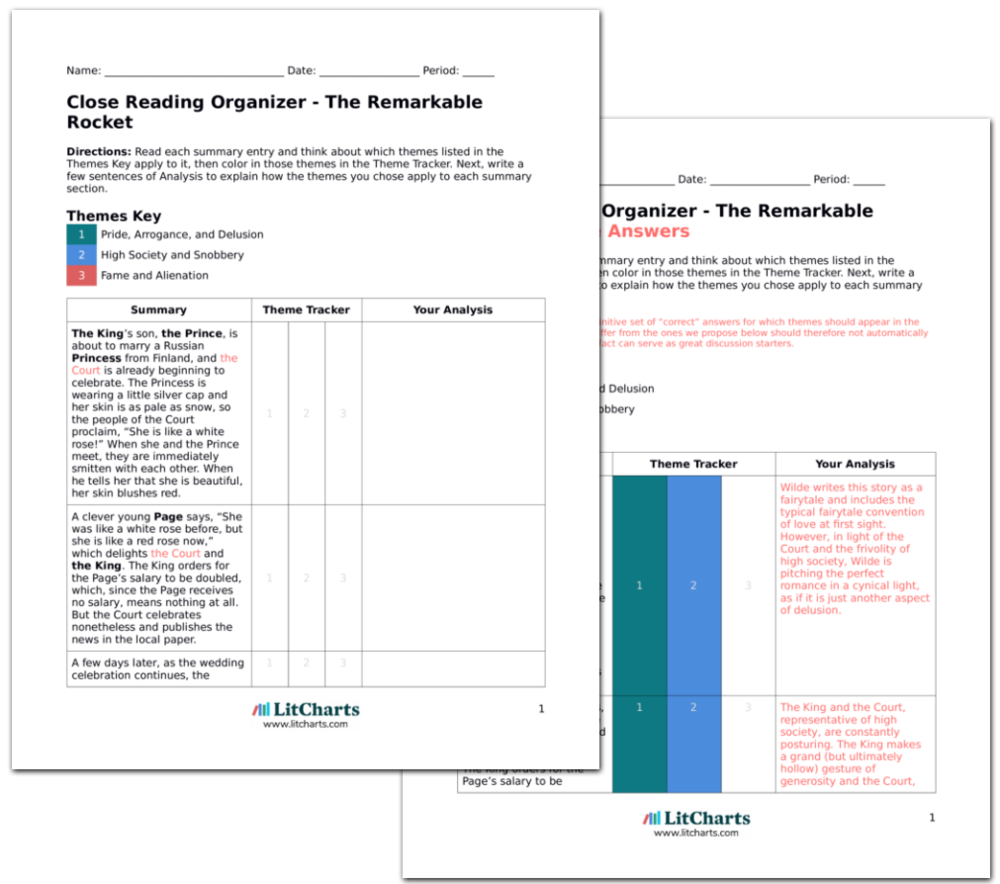