Welcome to the LitCharts study guide on Baroness Orczy's The Scarlet Pimpernel. Created by the original team behind SparkNotes, LitCharts are the world's best literature guides.

A concise biography of Baroness Orczy plus historical and literary context for The Scarlet Pimpernel.

A quick-reference summary: The Scarlet Pimpernel on a single page.

In-depth summary and analysis of every chapter of The Scarlet Pimpernel. Visual theme-tracking, too.

Explanations, analysis, and visualizations of The Scarlet Pimpernel's themes.

Description, analysis, and timelines for The Scarlet Pimpernel's characters.

Explanations of The Scarlet Pimpernel's symbols, and tracking of where they appear.

An interactive data visualization of The Scarlet Pimpernel's plot and themes.

Baroness Emma Orczy was born the only child of Baron Félix Orczy de Orci and Countess Emma Wass de Szentegyed et Cege. Orczy’s immediate and extended family were notable members of Romanian and Italian nobility, and her maternal grandfather was a member of the Hungarian parliament. Her parents owned a large estate in Hungary, but when Baron Orczy tried to modernize and bought mechanical equipment, the peasants revolted and burned the estate to the ground. Orczy and her family were forced to flee and ran first to Budapest, then to Brussels and Paris, before finally settling in London in 1880. Orczy lived a comfortable life in London and was accepted by British society. She was educated at both the West London School of Art and Heatherley’s School of Fine Art, where she focused on painting. While at school, Orczy met her future husband, Montague MacLean Barstow, and they married in 1894. In 1899, Orczy gave birth to the couple’s only child, a son named John, and published her first novel, The Emperor’s Candlesticks. Orczy’s first attempt at writing was a failure, but she continued and published several popular detective stories in the Royal Magazine. In 1901, Orczy published her second novel, In Mary’s Reign, and in 1903, The Scarlet Pimpernel was born as a play written by both Orczy and her husband. The Scarlet Pimpernel was not released as a novel until 1905; however, it was an instant success, and Orczy went on to publish several sequels. Orczy was well known publicly for her support of the aristocracy and her belief in the superiority of nobility, and these opinions are well established in The Scarlet Pimpernel. Orczy was also in favor of British imperialism and colonialism, and this too is reflected in her novel, most notably through the character of Mr. Jellyband, the “worthy” and “honest” innkeeper. The commercial success of The Scarlet Pimpernel series, and numerous unrelated novels, allowed Orczy to move to Monte Carlo in the French Riviera, where her beloved husband died in 1942. Afterward, Orczy lived alone and died in Oxfordshire, England in 1947 at the age of 82.
Get the entire The Scarlet Pimpernel LitChart as a printable PDF.
"My students can't get enough of your charts and their results have gone through the roof." -Graham S.
Download 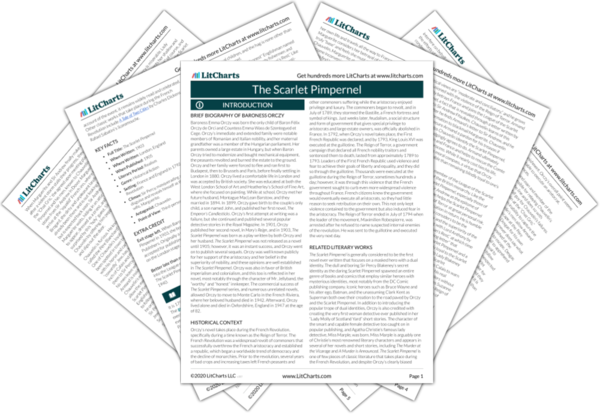 Historical Context of The Scarlet Pimpernel

Orczy’s novel takes place during the French Revolution, specifically during a time known as the Reign of Terror. The French Revolution was a widespread revolt of commoners that successfully overthrew the French aristocracy and established a republic, which began a worldwide trend of democracy and the decline of monarchies. Prior to the revolution, several years of bad crops and increasing taxes left French peasants and other commoners suffering while the aristocracy enjoyed privilege and luxury. The commoners began to revolt, and in July of 1789, they stormed the Bastille, a French fortress and symbol of kings. Just weeks later, feudalism, a social structure and form of government that gives special privilege to aristocrats and large estate owners, was officially abolished in France. In 1792, when Orczy’s novel takes place, the First French Republic was declared, and by 1793, King Louis XVI was executed at the guillotine. The Reign of Terror, a government campaign that declared all French nobility traitors and sentenced them to death, lasted from approximately 1789 to 1793. Leaders of the First French Republic used violence and fear to achieve their goals of liberty and equality, and they did so through the guillotine. Thousands were executed at the guillotine during the Reign of Terror, sometimes hundreds a day; however, it was through this violence that the French government sought to curb even more widespread violence throughout France. French citizens knew the government would eventually execute all aristocrats, so they had little reason to seek retribution on their own. This not only kept violence contained to the government but also induced fear in the aristocracy. The Reign of Terror ended in July of 1794 when the leader of the movement, Maximilien Robespierre, was arrested after he refused to name suspected internal enemies of the revolution. He was sent to the guillotine and executed the very next day.

Other Books Related to The Scarlet Pimpernel

The Scarlet Pimpernel is generally considered to be the first novel ever written that focuses on a masked hero with a dual identity. The dull and boring Sir Percy Blakeney’s secret identity as the daring Scarlet Pimpernel spawned an entire genre of books and comics that employ similar heroes with mysterious identities, most notably from the DC Comic publishing company. Iconic heroes such as Bruce Wayne and his alter ego, Batman, and the unassuming Clark Kent as Superman both owe their creation to the road paved by Orczy and the Scarlet Pimpernel. In addition to introducing the popular trope of dual identities, Orczy is also credited with creating the very first woman detective ever published in her “Lady Molly of Scotland Yard” short stories. The character of the smart and capable female detective too caught on in popular publishing, and Agatha Christie’s famous lady detective, Miss Marple, was born. Miss Marple is arguably one of Christie’s most renowned literary characters and appears in several of her novels and short stories, including The Murder at the Vicarage and A Murder is Announced. The Scarlet Pimpernel is one of few pieces of classic literature that takes place during the French Revolution, and despite Orczy’s clearly biased account of the event, it remains widely read and celebrated. Other classic works that take place during the French Revolution include A Tale of Two Cities by Charles Dickens and Rafael Sabatini’s Scaramouche.
Key Facts about The Scarlet Pimpernel

Extra Credit for The Scarlet Pimpernel