Get LitCharts A+
LitCharts assigns a color and icon to each theme in The School for Scandal, which you can use to track the themes throughout the work.

The School for Scandal is part of the eighteenth-century tradition of sentimentalism, but also a satire of sentimentalism’s drawbacks. In the 1770s, when the play was written, society approved of the idea of the “Man of Sentiment,” whose conduct guided by moral sentiments and emotions, instead of cool, calm reasoning. To be charitable, loyal, and loving to a fault were admirable qualities, and the eloquent recitation of sentiments was admired as morally edifying. In this context, to be motivated by sentiment meant to choose one’s actions based on an emotional reaction caused by a strongly held moral principle.

The School for Scandal presents true sentiment as admirable, but much less poetic than it would seem. Although Joseph Surface acts like a “Man of Sentiment,” he never does anything without a cold calculation of his own self-interest. His brother Charles, however, who never professes any lofty sentiments at all, is the true Man of Sentiment, who lets himself be guided by his feelings alone. When Charles hears of Mr. Stanley’s plight, he is so moved by a feeling of generosity that he completely forgets his own interests. Joseph, on the other hand, only speaks about how important charity is to him, even saying it is painful to him to be unable to give “Mr. Stanley” any help, when in fact he feels no pity for the poor at all.

Sir Peter is a great admirer of those who speak sentimentally, but in his own life he does not allow himself to be guided by sentiment. Sir Peter admires Joseph Surface’s sentimental talk, not realizing that it is all hypocrisy, and so lauds Joseph and denigrates and suspects Charles. Yet although Sir Peter adores his wife, he refuses to let this love inspire him to generosity or sweetness towards her, instead focusing on how much money she spends and whether she is the cause of their arguments. By the end of the play, Sir Peter has learned to live by the sentiments he had earlier professed to admire. Although he is being laughed at around town by those who believe his wife has had an affair, he decides to be guided by his own heart and to trust and forgive Lady Teazle—sincerely following his sentiments rather than simply admiring them in others.

The play suggests that sentiment (when it springs from moral principles) is a good guide in life, especially in romantic and family relationships. To allow oneself to be carried away by emotions prompted by innate principles of generosity and love is not always practical, but it is better than selfishly guarding one’s own interests. At the same time, the play also suggests that the glorification of sentiment has led to confusion over what is really important. Many have mastered the art of speaking sentimentally, but talk is cheap, and sentiments acted on are more valuable than sentiments professed in poetic and lofty speeches.

The Man of Sentiment ThemeTracker 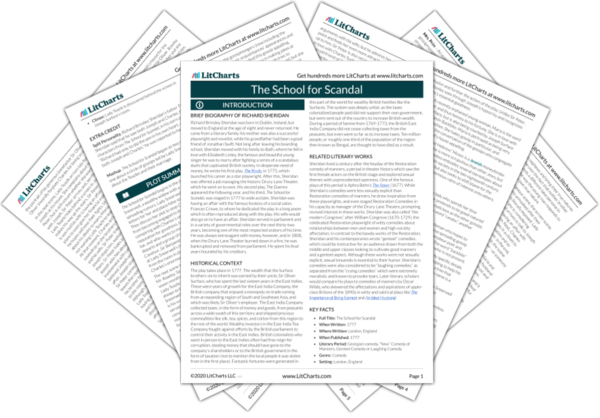 The Man of Sentiment Quotes in The School for Scandal

Below you will find the important quotes in The School for Scandal related to the theme of The Man of Sentiment.
Act 1, Scene 2 Quotes

ROWLEY. You know, Sir Peter, I have always taken the liberty to differ with you on the subject of these two young gentlemen. I only wish you may not be deceived in your opinion of the elder. For Charles, my life on't! he will retrieve his errors yet. Their worthy father, once my honoured master, was, at his years, nearly as wild a spark; yet, when he died, he did not leave a more benevolent heart to lament his loss.

SIR PETER. You are wrong, Master Rowley. On their father's death, you know, I acted as a kind of guardian to them both, till their uncle Sir Oliver's liberality gave them an early independence: of course, no person could have more opportunities of judging of their hearts, and I was never mistaken in my life. Joseph is indeed a model for the young men of the age. He is a man of sentiment, and acts up to the sentiments he professes; but for the other, take my word for't, if he had any grain of virtue by descent, he has dissipated it with the rest of his inheritance. Ah! my old friend, Sir Oliver, will be deeply mortified when he finds how part of his bounty has been misapplied.

SIR PETER. Madam, madam, I beg your pardon—there’s no stopping these good gentlemen's tongues. —But when I tell you, Mrs. Candour, that the lady they are abusing is a particular friend of mine, I hope you'll not take her part.

LADY SNEERWELL. Ha! ha! ha! Well said, Sir Peter! but you are a cruel creature, —too phlegmatic yourself for a jest, and too peevish to allow wit in others.

SIR PETER. Ah! madam, true wit is more nearly allied to good-nature than your ladyship is aware of.

LADY TEAZLE. True, Sir Peter: I believe they are so near akin that they can never be united.

SIR BENJAMIN. Or rather, madam, suppose them to be man and wife, because one seldom sees them together.

JOSEPH. A curious dilemma my politics have run me into! I wanted, at first, only to ingratiate myself with Lady Teazle, that she might not be my enemy with Maria; and I have, I don't know how, become her serious lover. Sincerely I begin to wish I had never made such a point of gaining so very good a character, for it has led me into so many cursed rogueries that I doubt I shall be exposed at last.

SIR PETER. Wild!—Ah! my old friend, I grieve for your disappointment there; he’s a lost young man, indeed. However, his brother will make you amends. Joseph is, indeed, what a youth should be. Everybody in the world speaks well of him.

SIR OLIVER. I am sorry to hear it; he has too good a character to be an honest fellow. Everybody speaks well of him!—Pshaw! then he has bowed as low to knaves and fools as to the honest dignity of genius and virtue.

SIR PETER. What, Sir Oliver! do you blame him for not making enemies?

SIR OLIVER. Yes, if he has merit enough to deserve them.

SIR PETER. Well, well—you’ll be convinced when you know him. ’Tis ediﬁcation to hear him converse; he professes the noblest sentiments.

SIR OLIVER. Oh, plague of his sentiments! If he salutes me with a scrap of morality in his mouth, I shall be sick directly. —But, however, don’t mistake me, Sir Peter; I don’t mean to defend Charles’s errors: but, before I form my judgment of either of them, I intend to make a trial of their hearts; and my friend Rowley and I have planned something for the purpose.

JOSEPH. Now, my dear Lady Teazle, if you would but once make a trifling faux pas, you can't conceive how cautious you would grow, and how ready to humour and agree with your husband.

LADY TEAZLE. Do you think so?

JOSEPH. Oh! I am sure on't; and then you would find all scandal would cease at once, for, in short, your character at present is like a person in a plethora, absolutely dying from too much health.

No, sir, —she has recovered her senses, and your own arts have furnished her with the means. —Sir Peter, I do not expect you to credit me—but the tenderness you expressed for me, when I am sure you could not think I was a witness to it, has penetrated so to my heart, that had I left the place without the shame of this discovery, my future life should have spoken the sincerity of my gratitude. As for that smooth-tongued hypocrite, who would have seduced the wife of his too credulous friend, while he affected honourable addresses to his ward—I behold him now in a light so truly despicable, that I shall never again respect myself for having listened to him.

SIR OLIVER. I was, sir —so nearly that my present poverty, I fear, may do discredit to her wealthy children, else I should not have presumed to trouble you.

JOSEPH. Dear sir, there needs no apology:—he that is in distress, though a stranger, has a right to claim kindred with the wealthy. I am sure I wish I was of that class, and had it in my power to offer you even a small relief.

SIR OLIVER. If your uncle, Sir Oliver, were here, I should have a friend.

JOSEPH. I wish he was, Sir, with all my heart: you should not want an advocate with him, believe me, sir.

SIR OLIVER. I should not need one—my distresses would recommend me. But I imagined his bounty would enable you to become the agent of his charity.

JOSEPH. My dear sir, you were strangely misinformed. Sir Oliver is a worthy man, a very worthy man; but avarice, Mr. Stanley, is the vice of age. I will tell you, my good sir, in confidence, what he has done for me has been a mere nothing; though people, I know, have thought otherwise, and, for my part, I never chose to contradict the report.

SIR PETER. Though, when it is known that we are reconciled, people will laugh at me ten times more.

ROWLEY. Let them laugh, and retort their malice only by showing them you are happy in spite of it.

SIR PETER. I’faith, so I will! and, if I’m not mistaken, we may yet be the happiest couple in the country.

ROWLEY. Nay, Sir Peter, he who once lays aside suspicion—

SIR PETER. Hold, Master Rowley! if you have any regard for me, never let me hear you utter anything like a sentiment: I have had enough of them to serve me the rest of my life.