Download this LitChart! (PDF)
Teachers and parents! Struggling with distance learning? Our Teacher Edition on The Sculptor’s Funeral can help.

Welcome to the LitCharts study guide on Willa Cather's The Sculptor’s Funeral. Created by the original team behind SparkNotes, LitCharts are the world's best literature guides.

A concise biography of Willa Cather plus historical and literary context for The Sculptor’s Funeral.

A quick-reference summary: The Sculptor’s Funeral on a single page.

In-depth summary and analysis of every of The Sculptor’s Funeral. Visual theme-tracking, too.

Explanations, analysis, and visualizations of The Sculptor’s Funeral's themes.

The Sculptor’s Funeral's important quotes, sortable by theme, character, or .

Description, analysis, and timelines for The Sculptor’s Funeral's characters.

Explanations of The Sculptor’s Funeral's symbols, and tracking of where they appear.

An interactive data visualization of The Sculptor’s Funeral's plot and themes.

Willa Cather was born in the Back Creek Valley of Virginia in 1873, spending the first nine years of her life in Willow Shade. To avoid the tuberculosis outbreak in Virginia, the Cather family relocated to Nebraska, joining extended family already trying their hand at frontier life. During her upbringing in Red Cloud, Nebraska, Cather was shaped by the unforgiving landscape and the exposure to various native and European cultures. With the intention of becoming a doctor, Cather attended the University of Nebraska at Lincoln. After some of her work began getting published, Cather changed her major, graduating with a degree in English. She moved to Pittsburgh the following year, where she worked as a teacher and journalist. Cather’s first collection of short stories, The Troll Garden (1905), was published by McClure’s Magazine. Cather began her successful editorial career with McClure’s in 1906. The years to follow were some of her most productive writing years, publishing her critically successful “prairie trilogy,” O Pioneers! (1913), The Song of the Lark (1915), and My Antonia (1918). More than just a regional writer, Cather firmly established her place in the American literary canon by winning a Pulitzer Prize for her novel One of Ours in 1923. Cather never married, but she maintained close female friendships. Most notably, Cather lived with editor Edith Lewis for the last 40 years of her life. Cather died in Manhattan at the age of 73.
Get the entire The Sculptor’s Funeral LitChart as a printable PDF.
"My students can't get enough of your charts and their results have gone through the roof." -Graham S.
Download 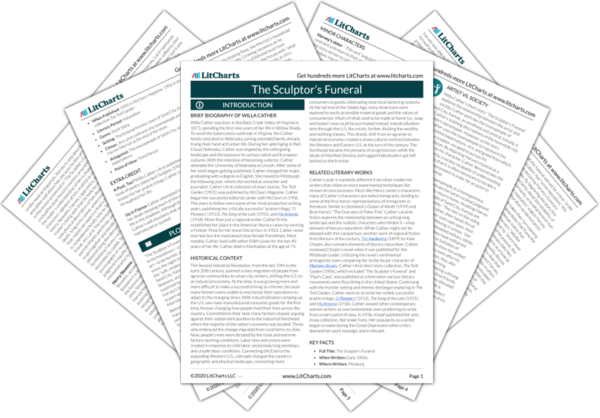 Historical Context of The Sculptor’s Funeral

The Second Industrial Revolution, from the late 19th to the early 20th century, sparked a mass migration of people from agrarian communities to urban city centers, shifting the U.S. to an industrial economy. At the time, it was growing more and more difficult to make a successful living as a farmer, because many farmers were unable to mechanize their operations to adapt to the changing times. With industrialization ramping up, the U.S. saw mass-manufactured consumer goods for the first time, forever changing how people lived their lives across the country. Committed to their land, many farmers stayed, arguing against their subservient position to the industrial Northeast where the majority of the nation’s economy was located. Those who embraced the change migrated from rural farms to cities. Now, people’s lives were dictated by the clock and extreme factory working conditions. Labor laws and unions were created in response to child labor, excessively long workdays, and unsafe labor conditions. Connecting the East to the expanding Western U.S., railroads changed the country’s geographic and physical landscape, connecting more consumers to goods, eliminating most local bartering systems. At the tail end of the Gilded Age, many Americans were exposed to easily accessible material goods and the values of consumerism. Much of what used to be made at home (i.e., soap and butter) now could be purchased instead. Industrialization tore through the U.S. like a train, further dividing the wealthy and working classes. This drastic shift from an agrarian to industrial economy created a sharp cultural contrast between the Western and Eastern U.S. at the turn of the century. The Northeast became the pinnacle of progressivism, while the ideals of Manifest Destiny and rugged individualism got left behind on the frontier.

Other Books Related to The Sculptor’s Funeral

Cather’s style is markedly different from other modernist writers that relied on more experimental techniques like stream of consciousness. Much like Henry James’s characters, many of Cather’s characters are exiled immigrants, lending to some of the first heroic representations of immigrants in literature. Similar to Steinbeck’s Grapes of Wrath (1939) and Bret Harte’s “The Outcasts of Poker Flat,” Cather’s prairie fiction explores the relationship between an unforgiving landscape and the realistic characters who inhabit it—a key element of literary naturalism. While Cather might not be pleased with this comparison, another work of regional fiction from the turn of the century, The Awakening (1899) by Kate Chopin, also contains elements of literary naturalism. Cather reviewed Chopin’s novel when it was published for the Pittsburgh Leader, criticizing the novel’s sentimental protagonist, even comparing her to the titular character of Madame Bovary. Cather’s first short story collection, The Troll Garden (1906), which included “The Sculptor’s Funeral” and “Paul’s Case,” was published at a time when various literary movements were flourishing in the United States. Continuing with the frontier setting and themes she began exploring in The Troll Garden, Cather went on to write her widely successful prairie trilogy: O Pioneers! (1913), The Song of the Lark (1915), and My Antonia (1918). Cather viewed other contemporary women writers as oversentimental, even preferring to write from a man’s point of view. In 1936, Knopf published her only essay collection, Not Under Forty. Her popularity as a writer began to wane during the Great Depression when critics deemed her work nostalgic and irrelevant.
Key Facts about The Sculptor’s Funeral

Extra Credit for The Sculptor’s Funeral

A Poet, Too? Willa Cather’s first published work was actually a book of poetry titled April Twilights (1903). Although best known for her prairie trilogy, Cather continued to write verse throughout her life.

Up in Flames Cather attempted to burn all of her letters before her death, keeping much of the information about her personal life in the shadows. Although thousands of letters were spared, Cather’s will stipulates that no part of them shall be reproduced or quoted. 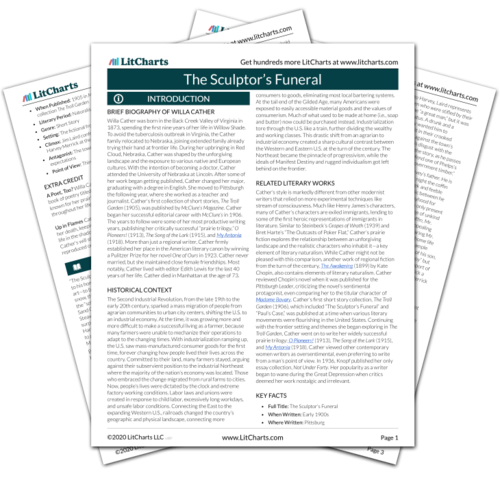 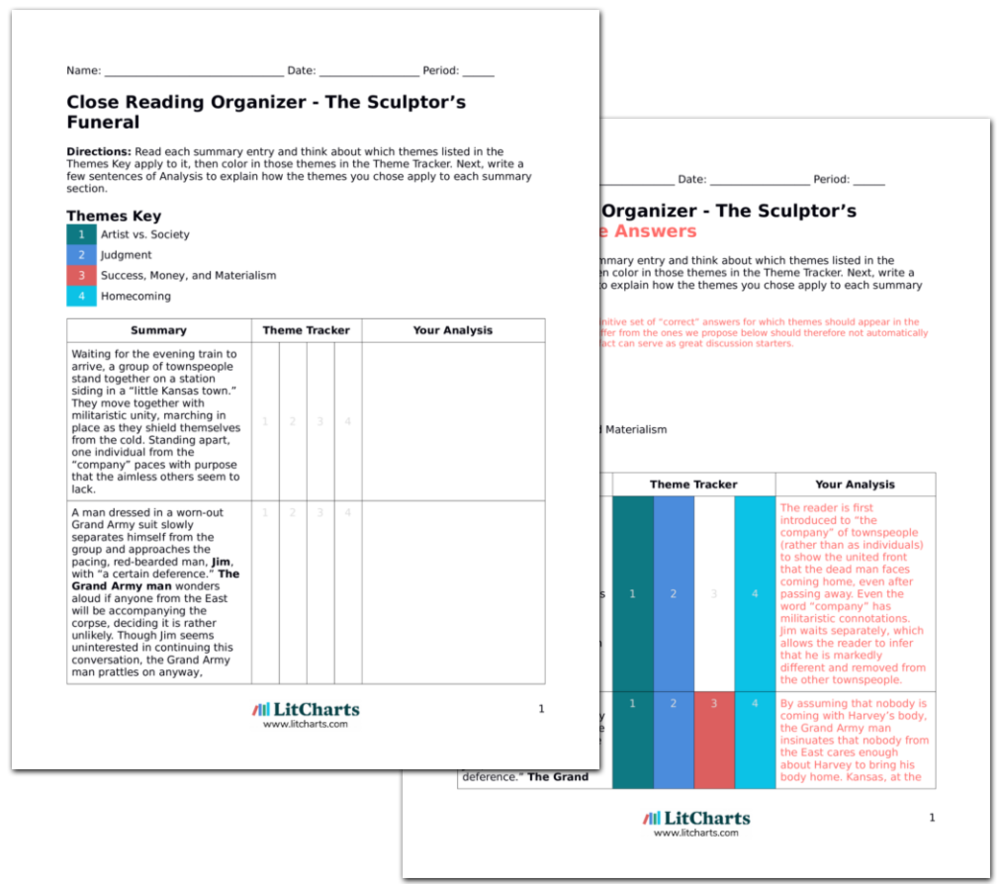