Mr. Adolf Verloc, a shopkeeper in his forties, heads out into the London streets one morning, leaving his business in the hands of his wife, Winnie, and Winnie’s brother Stevie. Winnie looks after Stevie, who is mentally disabled, as if he’s her son. She married Verloc seven years ago because he had the money and willingness to support her, Stevie, and their sickly, widowed mother.

Verloc attends a meeting at a foreign embassy with a secretary named Mr. Vladimir. Verloc has been secretly employed by the embassy as an undercover agent for 11 years, but Vladimir believes that Verloc has grown lazy and isn’t earning his keep. To keep his job, Verloc must give the complacent English “a jolly good scare” by instigating a terrorist bombing. The bombing will be attributed to anarchists, which will turn public opinion against these revolutionaries. Vladimir recommends staging an attack on “science” by bombing the Greenwich Observatory.

Verloc meets regularly with a revolutionary society called The Future of the Proletariat. The group includes Michaelis, a gentle idealist who’s out on parole after being imprisoned for his involvement a robbery; Ossipon, a medical school dropout obsessed with pseudo-scientific theories; and Yundt, a would-be terrorist. However, none of these men are violent or particularly effective in any way. Verloc, meanwhile, feels tormented by Vladimir’s threat and can’t decide what to do next.

The story flashes forward to the aftermath of a terrorist bombing in Greenwich Park. Ossipon is having a beer with a mysterious figure called The Professor, an anarchist and bomb-maker who has a detonator and explosive device on his person at all times. Because the police know that he’ll set off the detonator if they try to arrest him, he wanders the city freely. He also believes his deadly potential makes him superior to other anarchists. When The Professor hears about that day’s bombing, he readily admits to Ossipon that he supplied Verloc with the explosives for the attack. After leaving this meeting, The Professor has a menacing run-in with Chief Inspector Heat, the police department’s “expert in anarchist procedure.”

Chief Inspector Heat is distressed by the bombing. Two men were seen getting off the Underground, and the bomber stumbled over a tree root and fell, blowing himself up. Importantly, Inspector Heat salvaged a scrap of a coat from the bomber’s remains. Inspector Heat hates anarchists, and when he hears that the suspected bombers arrived on a train from Michaelis’s neighborhood, he’s determined to pin the crime on Michaelis—that way, even though Heat afraid of apprehending The Professor, he can still gain a symbolic victory over anarchists. However, Heat’s boss and rival, the Assistant Commissioner, has society connections to Michaelis through the latter’s patroness, and he hopes to exonerate the anarchist for fear of offending the woman. The Assistant Commissioner decides to take this matter into his own hands. He also examines Heat’s scrap of cloth and discovers that the address of Verloc’s shop is inked onto it.

The story then flashes back to before the bombing. Winnie’s mother has secured a place in a retirement home for widows, hoping that leaving Stevie in Winnie’s care will be better for him. Although Winnie is upset that this move will make people think that Winnie was a poor caretaker, she and Stevie accompany their mother to the home. During the ride, Stevie is distraught by the cab driver’s evident poverty and the way he whips his sick horse. Stevie is deeply affected by others’ suffering, and when he can’t do anything to resolve it, he becomes quietly enraged.

Just after this, Verloc takes a trip to the Continent (mainland Europe) for undisclosed reasons. Upon his return, Winnie asks him to take a greater interest in Stevie—he’s been moping around since their mother left. Verloc and Stevie begin to bond over walks, though when Stevie’s agitation persists, Winnie agrees that he should be sent to Michaelis’s cottage for a stay in the countryside. Unbeknownst to Verloc, Winnie sews Stevie’s address into his coat in case he ever gets lost.

On the day of the bombing, Verloc comes home in the evening, seeming ill and out of sorts. He tells Winnie he’s withdrawn his entire savings from his banks on the Continent, and that he thinks they should move abroad. Their discussion is interrupted by the Assistant Commissioner’s arrival. Winnie asks Verloc if the Commissioner is a foreigner from the Embassy—she’s heard Verloc talking about such things in his sleep. Verloc angrily steps outside with the man. While he’s gone, Chief Inspector Heat visits the shop and shows Winnie the scrap from the coat, which she recognizes as Stevie’s. When Verloc returns alone, he and Heat discuss the bombing in the other room. Winnie eavesdrops and puts together the details, realizing with horror that Stevie was killed in the bombing and that Verloc was responsible.

After Inspector Heat leaves, Verloc feels sorry for Winnie—he never meant for Stevie to die. He’d even grown somewhat fond of the loyal boy during their walks, during which he’d taught Stevie to distrust the police and prepared him to express his rage against them by bombing the Greenwich Observatory. However, when he tries to explain all this to Winnie, she remains immobile and silent with grief. Verloc thinks that Winnie is being unreasonable, and that she’s failed to understand how much pressure he’s been under because of Vladimir. Anyway, Winnie is partly to blame, too, for forcing Stevie to spend time with him and for putting his name in his coat, leading the police back to them. Winnie briefly considers escape but then, in a passion, plunges a carving knife into Verloc’s chest before he can react.

After Verloc dies, Winnie wanders the streets, contemplating suicide in order to avoid being hanged for murder, until she stumbles into Ossipon. Ossipon heard about the bombing and was coming to the Verlocs’ on the assumption that Verloc was the man killed. He has feelings for Winnie and also hopes to gain access to Verloc’s money, so he agrees to help Winnie flee to France. However, Winnie’s seemingly unhinged ranting against Verloc disturbs him. His fear deepens when he learns that the whole affair is entangled with a foreign embassy. When they stop by the Verlocs’ shop, Ossipon sees Verloc’s corpse, realizes the full truth of what’s happened, and becomes terrified of Winnie. He helps Winnie onto a train for the coast and jumps from the train at the last minute, Verloc’s money in his pocket.

Ten days later, Ossipon has another beer with The Professor while they discuss anarchism. Their friend Michaelis persists in idealistic theories, while Ossipon believes that science will eventually rule society—but The Professor remains devoted to the destruction of all things. However, Ossipon no longer has much heart for the subject; he is haunted by the news of Winnie’s suicide by jumping off the cross-channel ferry. Ossipon and The Professor go their separate ways, The Professor blending into the London crowds with his hidden explosives, “unsuspected and deadly.” 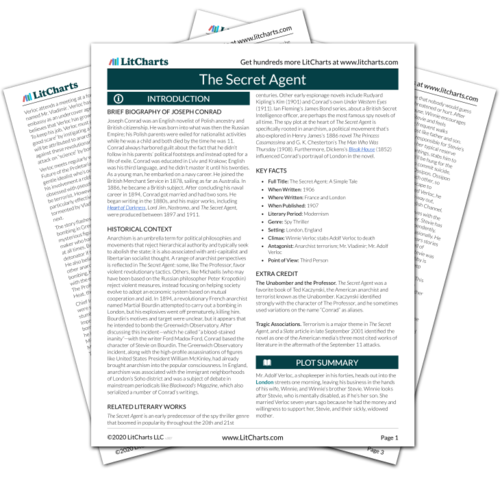 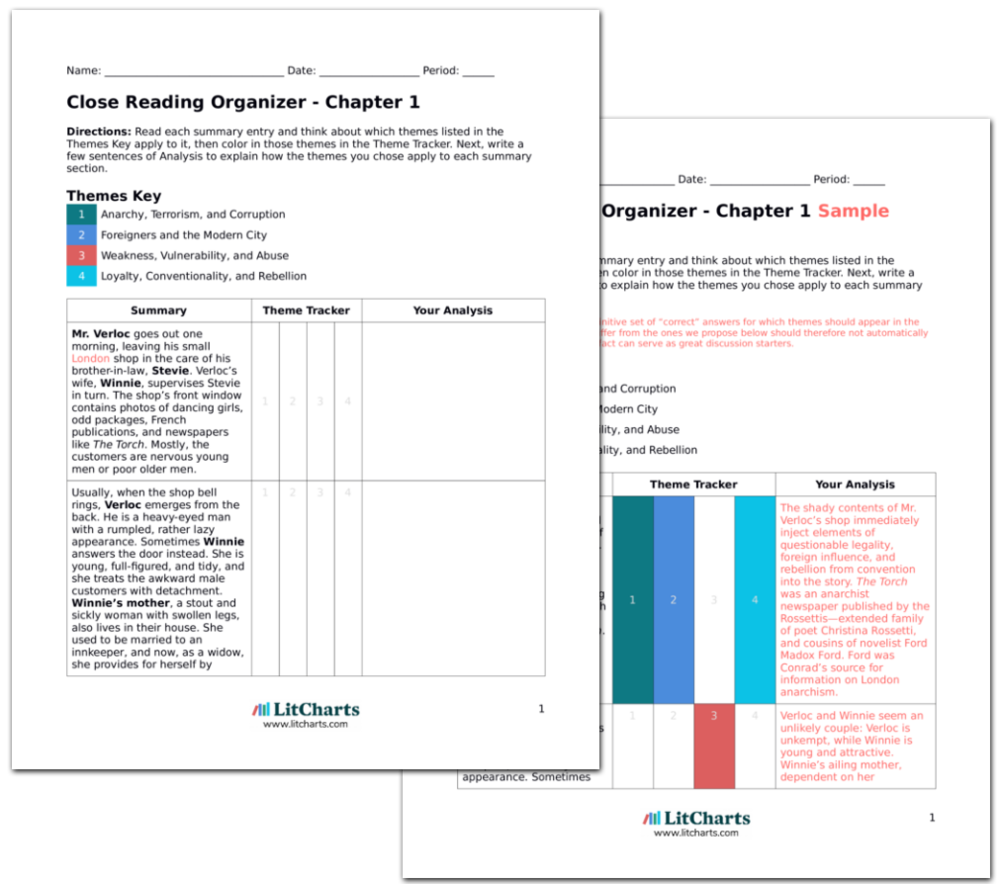