Get LitCharts A+
LitCharts assigns a color and icon to each theme in The Secret Garden, which you can use to track the themes throughout the work.

The Secret Garden is organized around a number of secrets. Mary's very existence is a secret from most of her parents' friends; Colin experiences some of the same while also insisting that visual evidence of his illness should be kept secret from the Misselthwaite staff; and the biggest draw of the secret garden for Mary is that it's a secret. By exploring how secrets function in both positive and negative ways throughout the novel, The Secret Garden suggests that secrets do have their place—but that place is among children and even then, only when children use secrets to develop a sense of independence. Adults' secret keeping, on the other hand, will only ever bring suffering and loneliness, often at a child's expense.

Every instance in which adult characters in the novel keep secrets is described as either objectively bad or, in the case of a few (most notably that Ben Weatherstaff has been secretly tending to the secret garden for the last ten years), unhelpful in the long run. Specifically, the novel goes to great lengths to show how when adults keep secrets, children suffer. The narrator notes that Mary's mother never truly wanted a child, which is why Mary is kept away and separate from the rest of the household. Though it's worth noting that this is likely what saved Mary's life when cholera swept through her family's home—her seclusion meant she wasn't exposed to the disease—her seclusion also put her at risk of being missed entirely and left on her own longer than she already was, with potentially disastrous results. Similarly, the particulars of the death of Mrs. Craven trap both Mr. Craven and Colin in miserable situations. Because Mr. Craven blamed the tree branch that broke for his wife's deadly fall, he had the garden locked up, hid the key, and forbids anyone from mentioning the garden, his wife, and his son. He spends his time alone, brooding, while keeping Colin a secret from children his own age leaves Colin dangerously and damagingly isolated. In both cases, the novel makes the case that when adults keep secrets, especially ones that they never intend to expose, those secrets are damaging to them as well as everyone around them. Especially for Mr. Craven, it's also telling that keeping the garden a secret is ultimately ineffective—both in terms of easing his grief and in terms of the secret remaining a secret—as it suggests that aside from being damaging, keeping secrets like this isn't something that's capable of even accomplishing a desired result.

For the children, however, the secrets that they keep are magical things that allow them to connect with the natural world, with each other, and most importantly, help them develop a sense of independence. Mary spends only a few days in the secret garden by herself before she meets Dickon and discovers that she desperately wants to let him in on the secret. Then, after meeting Colin, she undergoes a similar shift as she decides to tell him about the secret garden and eventually, that she knows where the door and the key are. Sharing the secret garden with each other allows the children to develop their relationships with each other in a place where they can truly be themselves, away from the anxious and watchful eyes of the adults who believe that Colin is going to die. In this way, their secret allows them both the venue and the glue to strengthen their commitments to each other, to the garden, and eventually, to sharing the secret with others.

As Colin's health begins to improve, he vows to improve enough to impress Mr. Craven and make him proud—but he also believes that his recovery needs to be undertaken in secret, where his doctors and nurse can't see the progress and spoil the surprise for Mr. Craven. Because of this, Colin and Mary decide to pretend that Colin isn't improving and, at times, they pretend he's actually getting worse. They insist on wheeling Colin into the garden in his wheelchair and at several points they vow to not eat all of their meals as to throw their caregivers off the trail. Rather than this being a restrictive and damaging experience for them, playing pretend allows them to share when they're ready and only after they've brought the secret garden back to its former glory and turned Colin into "a real boy." And to their credit, this ruse works surprisingly well—Dr. Craven is perplexed by Colin's strange road to recovery, while Mr. Craven is thrilled to see his son healthy and strong. Mr. Craven is also pleased to discover that the garden is once again a beautiful and well-maintained space and this allows him to focus on the fact that the garden is responsible for Colin's health, not just for his wife's death.

Because of the ways in which the secrets that lead to the novel's happy ending differ from those that created the novel's conflicts in the first place, The Secret Garden suggests that there's a limit to how effective secrets can be: it implies that there must be a set end to the secret's life, or no good will come of it. However, the numerous good things that come from Colin's secret recovery process make it clear that keeping secrets can be an effective way for children to take control of their lives, practice being independent, and learn how to be good and trustworthy friends. 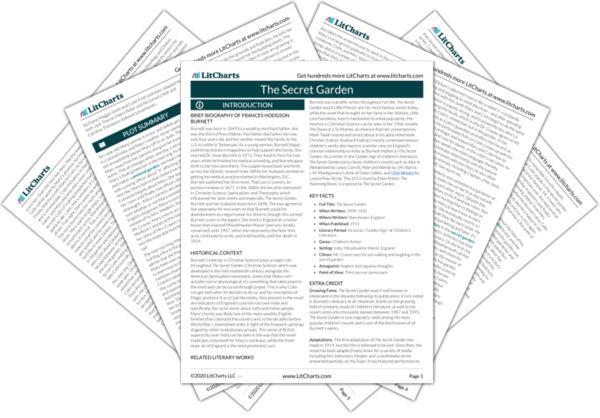 Secrets and Independence Quotes in The Secret Garden

Below you will find the important quotes in The Secret Garden related to the theme of Secrets and Independence.
Chapter 10 Quotes

Ben Weatherstaff rooted up a weed and threw it aside before he answered.

"Well, yes, I do. I was learned that by a young lady I was gardener to. She had a lot in a place she was fond of, an' she loved 'em like they was children—or robins. I've seen her bend over an' kiss 'em." He dragged out another weed and scowled at it. "That were as much as ten year' ago."

"Could you keep a secret, if I told you one? It's a great secret. I don't know what I should do if any one found it out. I believe I should die!" She said the last sentence quite fiercely.

"Oh, don't you see how much nicer it would be if it was a secret?"

He dropped back on his pillow and lay there with an odd expression on his face.

"I never had a secret," he said, "except that one about not living to grow up. They don't know I know that, so it is a sort of secret. But I like this kind better."

"He's been lying in his room so long and he's always been so afraid of his back that it has made him queer," said Mary. "He knows a good many things out of books but he doesn't know anything else. He says he has been to ill to notice things and he hates going out of doors and hates gardens and gardeners. But he likes to hear about this garden because it is a secret."

The scene which Dr. Craven beheld when he entered his patient's room was indeed rather astonishing to him. As Mrs. Medlock opened the door he heard laughing and chattering. Colin was on his sofa in his dressing-gown and he was sitting up quite straight looking at a picture in one of the garden books and talking to the plain child who at that moment could scarcely be called plain at all because her face was so glowing with enjoyment.

Colin flushed triumphantly. He had made himself believe that he was going to get well, which was really more than half the battle, if he had been aware of it. And the thought which stimulated him more than any other was this imagining what his father would look like when he saw that he had a son who was as straight and strong as other fathers' sons.

"You are just what I—what I wanted," he said. "I wish you were my mother—as well as Dickon's!"

All at once Susan Sowerby bent down and drew him with her warm arms close against the bosom under the blue cloak—as if he had been Dickon's brother. The quick mist swept over her eyes.

"Eh! Dear lad!" she said. "Thy own mother's in this 'ere very garden, I do believe. She couldna' keep out of it. Thy father mun come back to thee—he mun!"