Download this LitChart! (PDF)
Teachers and parents! Struggling with distance learning? Our Teacher Edition on The Selfish Giant can help.

Welcome to the LitCharts study guide on Oscar Wilde's The Selfish Giant. Created by the original team behind SparkNotes, LitCharts are the world's best literature guides.

A concise biography of Oscar Wilde plus historical and literary context for The Selfish Giant.

A quick-reference summary: The Selfish Giant on a single page.

In-depth summary and analysis of every of The Selfish Giant. Visual theme-tracking, too.

Explanations, analysis, and visualizations of The Selfish Giant's themes.

The Selfish Giant's important quotes, sortable by theme, character, or .

Description, analysis, and timelines for The Selfish Giant's characters.

Explanations of The Selfish Giant's symbols, and tracking of where they appear.

An interactive data visualization of The Selfish Giant's plot and themes.

Born to Anglo-Irish parents in Dublin, Oscar Wilde distinguished himself intellectually from a young age. Before he even attended college, he had acquired fluency in French and German—and at Oxford University, he proved to be a Classicist of considerable merit. At Oxford, he met the literary critic Walter Pater, then a professor of Classics, through whom he became associated with the Aesthetic Movement. Aestheticism was an intellectual movement which held that the aesthetic value of art, “art for art’s sake,” should be considered more highly than its social or political content. Under this philosophy, Wilde wrote a book of Poems (1881) and gave many lectures, going on tour throughout the United States and Canada. Upon returning to London, he found further success as a literary critic, beginning with book reviews in the Pall Mall Gazette. In 1884, he married Constance Lloyd, and in 1886, the pair had two children. The Happy Prince and Other Tales (1888), containing “The Selfish Giant,” was likely influenced by Wilde’s young children—though by that time his marriage had already begun to unravel, largely owing to the fact that he was, in actuality, a homosexual man. The 1890s, the last decade of Oscar Wilde’s life, were his most prolific period as an artist and critic. During this time, he wrote such famous works as The Picture of Dorian Gray (1890), “The Critic as Artist” (1891), A Woman of No Importance (1893), Salomé (1894), and The Importance of Being Earnest (1895). His career and life were cut short, however, by accusations that he was a “sodomite.” Wilde sued for libel, yet the evidence turned against him, and he was soon afterward tried and convicted for “gross indecency.” After his imprisonment, he composed The Ballad of Reading Gaol (1987). Wilde spent the remaining years of his life in France, where he succumbed to meningitis at age 46.
Get the entire The Selfish Giant LitChart as a printable PDF.
"My students can't get enough of your charts and their results have gone through the roof." -Graham S.
Download 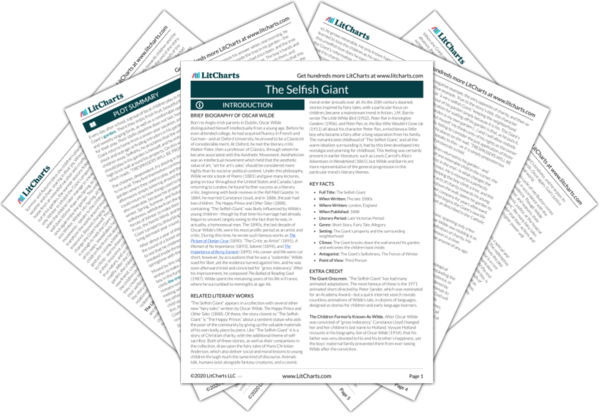 Other Books Related to The Selfish Giant

“The Selfish Giant” appears in a collection with several other new “fairy tales” written by Oscar Wilde, The Happy Prince and Other Tales (1888). Of these, the story closest to “The Selfish Giant” is “The Happy Prince,” about a sentient statue who aids the poor of the community by giving up the valuable materials of his own body, piece by piece. Like “The Selfish Giant” it is a story of Christian charity, with the additional theme of self-sacrifice. Both of these stories, as well as their companions in the collection, draw upon the fairy tales of Hans Christian Anderson, which also deliver social and moral lessons to young children through much the same kind of discourse. Animals talk, humans exist alongside fantasy creatures, and a cosmic moral order prevails over all. As the 20th century dawned, stories inspired by fairy tales, with a particular focus on children, became a mainstream trend in fiction. J.M. Barrie wrote The Little White Bird (1902), Peter Pan in Kensington Gardens (1906), and Peter Pan; or, the Boy Who Wouldn’t Grow Up (1911) all about his character Peter Pan, a mischievous little boy who became a fairy after a long separation from his family. The romanticized childhood of “The Selfish Giant,” and all the warm idealism surrounding it, had by this time developed into nostalgia and yearning for childhood. This feeling was certainly present in earlier literature, such as Lewis Carroll’s Alice’s Adventures in Wonderland (1865), but Wilde and Barrie are more representative of the general progression in this particular trend’s literary themes.
Key Facts about The Selfish Giant

Extra Credit for The Selfish Giant

The Giant Onscreen. “The Selfish Giant” has had many animated adaptations. The most famous of these is the 1971 animated short directed by Peter Sander, which was nominated for an Academy Award—but a quick internet search reveals countless animations of Wilde’s tale, in dozens of languages, designed as stories for children and early language-learners.

The Children Formerly Known As Wilde. After Oscar Wilde was convicted of “gross indecency,” Constance Lloyd changed her and her children’s last name to Holland. Vyvyan Holland recounts in his biography, Son of Oscar Wilde (1954), that his father was very devoted to his and his brother’s happiness, yet the boys’ maternal family prevented them from ever seeing Wilde after the conviction. 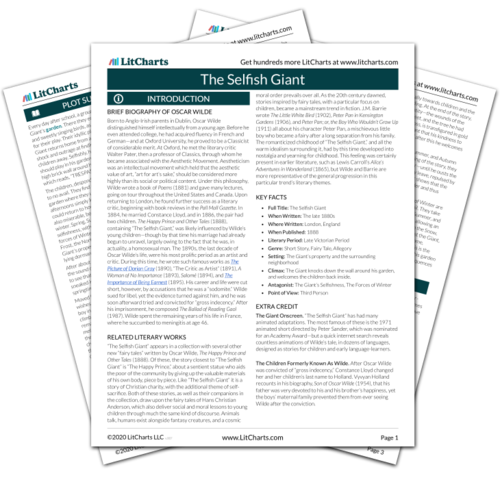 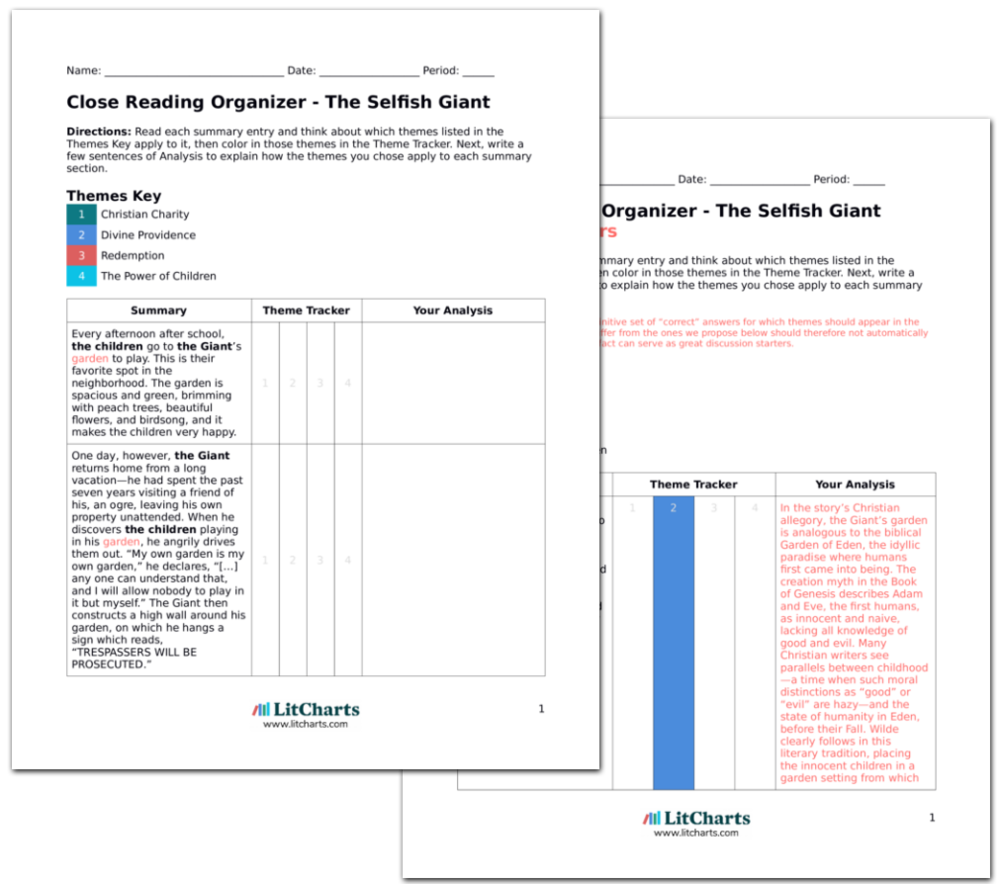