The Signalman
Introduction + Context
Plot Summary
Detailed Summary & Analysis
The Signalman
Themes
All Themes Responsibility and Guilt Helplessness, Fate, and Death The Supernatural and the Unknown
Quotes
Characters
All Characters The Narrator The Signalman The Ghost Tom
Symbols
All Symbols The Red Light The Train The Box

Download this LitChart! (PDF)
Teachers and parents! Struggling with distance learning? Our Teacher Edition on The Signalman can help.

Welcome to the LitCharts study guide on Charles Dickens's The Signalman. Created by the original team behind SparkNotes, LitCharts are the world's best literature guides.

A concise biography of Charles Dickens plus historical and literary context for The Signalman.

A quick-reference summary: The Signalman on a single page.

In-depth summary and analysis of every of The Signalman. Visual theme-tracking, too.

Explanations, analysis, and visualizations of The Signalman's themes.

The Signalman's important quotes, sortable by theme, character, or .

Description, analysis, and timelines for The Signalman's characters.

Explanations of The Signalman's symbols, and tracking of where they appear.

An interactive data visualization of The Signalman's plot and themes.

Born to a navy clerk, Charles Dickens spent his early childhood in Kent, England. When Dickens was 10 years old, the family moved to London, and his father was thrown in debtors' prison. Dickens left school and worked in a boot-blacking warehouse to help support his household. He later returned to school but left at age 15 to work as a law clerk, a court reporter, and a political journalist before devoting himself to writing full-time. His books were wildly successful both in England and in the United States, and they include classics like Hard Times, Great Expectations, Bleak House, and Oliver Twist, which are still popular today. Dickens also founded a theater company and a magazine, All the Year Round. He was unhappily married to Catherine Hogarth, with whom he had 10 children. Dickens was still writing when he died in 1870 and is buried in Westminster Abbey's Poets' Corner.
Get the entire The Signalman LitChart as a printable PDF.
"My students can't get enough of your charts and their results have gone through the roof." -Graham S.
Download 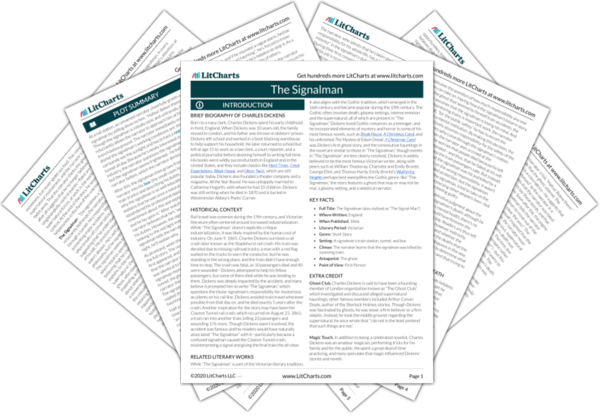 Historical Context of The Signalman

Rail travel was common during the 19th century, and Victorian literature often centered around increased industrialization. While “The Signalman” doesn’t explicitly critique industrialization, it was likely inspired by the human cost of industry. On June 9, 1865, Charles Dickens survived a rail crash later known as the Staplehurst rail crash. His train was derailed due to missing railroad tracks; a man with a red flag waited on the tracks to warn the conductor, but he was standing in the wrong place, and the train didn’t have enough time to stop. The crash was fatal, as 10 passengers died and 40 were wounded—Dickens attempted to help his fellow passengers, but some of them died while he was tending to them. Dickens was deeply impacted by the accident, and many believe it prompted him to write “The Signalman,” which questions the titular signalman’s responsibility for mysterious accidents on his rail line. Dickens avoided train travel whenever possible from that day on, and he died exactly 5 years after the crash. Another inspiration for the story may have been the Clayton Tunnel rail crash, which occurred on August 25, 1861; a train ran into another train, killing 23 passengers and wounding 176 more. Though Dickens wasn’t involved, the accident was famous and his readers would have naturally associated “The Signalman” with it—particularly because a confused signalman caused the Clayton Tunnel crash, misinterpreting a signal and giving the final train the all-clear.

Other Books Related to The Signalman

While “The Signalman” is part of the Victorian literary tradition, it also aligns with the Gothic tradition, which emerged in the 16th century and became popular during the 19th century. The Gothic often involves death, gloomy settings, intense emotion and the supernatural, all of which are present in “The Signalman.” Dickens loved Gothic romances as a teenager, and he incorporated elements of mystery and horror in some of his most famous novels, such as Bleak House, A Christmas Carol, and his unfinished The Mystery of Edwin Drood. A Christmas Carol was Dicken’s first ghost story, and the consecutive hauntings in the novel are similar to those in “The Signalman,” though events in “The Signalman” are less clearly resolved. Dickens is widely believed to be the most famous Victorian writer, along with peers such as William Thackeray, Charlotte and Emily Brontë, George Eliot, and Thomas Hardy. Emily Brontë’s Wuthering Heights perhaps best exemplifies the Gothic genre: like “The Signalman,” the story features a ghost that may or may not be real, a gloomy setting, and a skeptical narrator.
Key Facts about The Signalman

Extra Credit for The Signalman

Ghost Club. Charles Dickens is said to have been a founding member of London organization known as “The Ghost Club,” which investigated and discussed alleged supernatural hauntings; other famous members included Arthur Conan Doyle, author of the Sherlock Holmes stories. Though Dickens was fascinated by ghosts, he was never a firm believer or a firm skeptic. Instead, he took the middle ground: regarding the supernatural, he once wrote that “I do not in the least pretend that such things are not.”

Magic Touch. In addition to being a celebrated novelist, Charles Dickens was an amateur magician, performing tricks for his family and for the public. He spent a great deal of time practicing, and many speculate that magic influenced Dickens’ stories and novels. 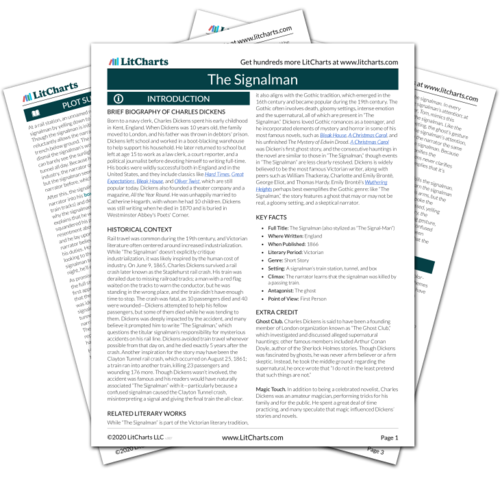 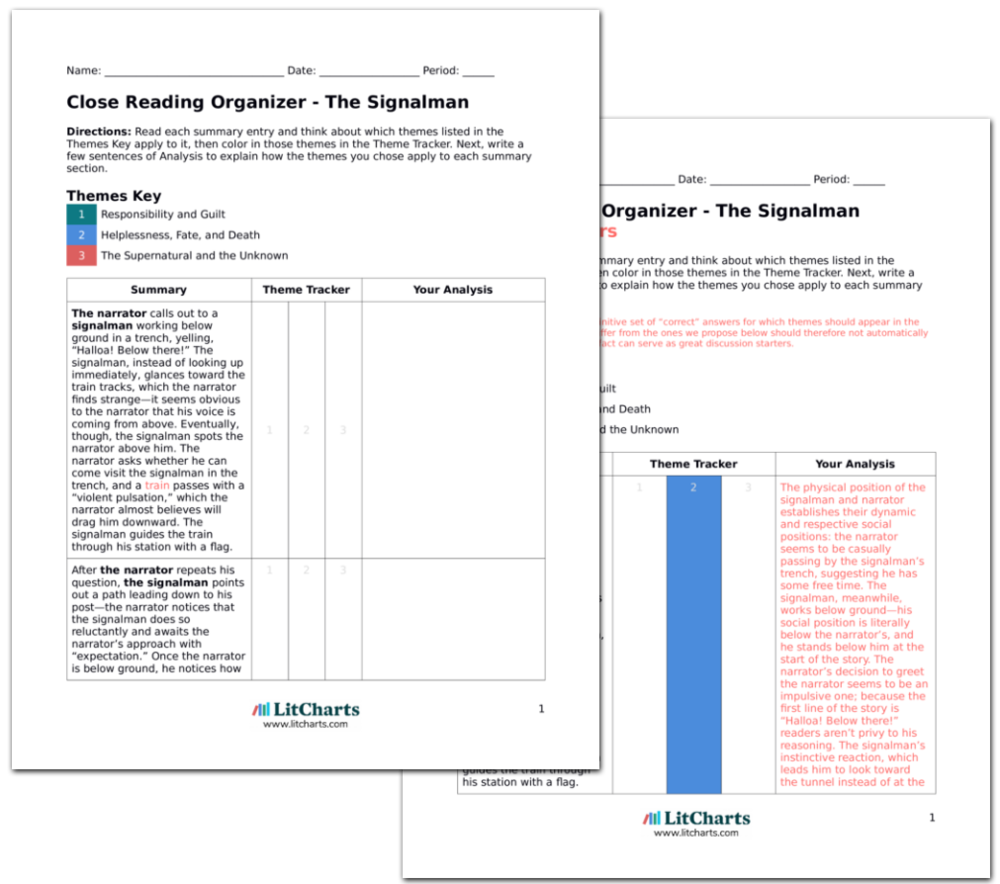