Download this LitChart! (PDF)
Teachers and parents! Struggling with distance learning? Our Teacher Edition on The Singing Lesson can help.

Welcome to the LitCharts study guide on Katherine Mansfield's The Singing Lesson. Created by the original team behind SparkNotes, LitCharts are the world's best literature guides.

A concise biography of Katherine Mansfield plus historical and literary context for The Singing Lesson.

A quick-reference summary: The Singing Lesson on a single page.

In-depth summary and analysis of every of The Singing Lesson. Visual theme-tracking, too.

Explanations, analysis, and visualizations of The Singing Lesson's themes.

The Singing Lesson's important quotes, sortable by theme, character, or .

Description, analysis, and timelines for The Singing Lesson's characters.

Explanations of The Singing Lesson's symbols, and tracking of where they appear.

An interactive data visualization of The Singing Lesson's plot and themes.

Katherine Mansfield was born in New Zealand to a wealthy and prominent family. She moved to London to attend Queens College at the age of 19, and afterward lived briefly in New Zealand again, but primarily spent her adult life in England with extensive travels through continental Europe. She was friends with other modernist writers of her time, such as D.H. Lawrence and Virginia Woolf. She had romantic relationships with both men and women—while she married men twice, she also had long-term relationships with three women. Her most prolific period as a writer began soon after her brother’s death in 1915 and continued through her diagnosis with tuberculosis in 1917. She refused to go to a sanitarium for her health, feeling that it would interrupt her writing. She moved to Cornwall near the sea for her lungs and then to France as her health deteriorated, but she continued to write. In 1923, when she was 34 years old, she died of a pulmonary hemorrhage, a complication of tuberculosis.
Get the entire The Singing Lesson LitChart as a printable PDF.
"My students can't get enough of your charts and their results have gone through the roof." -Graham S.
Download 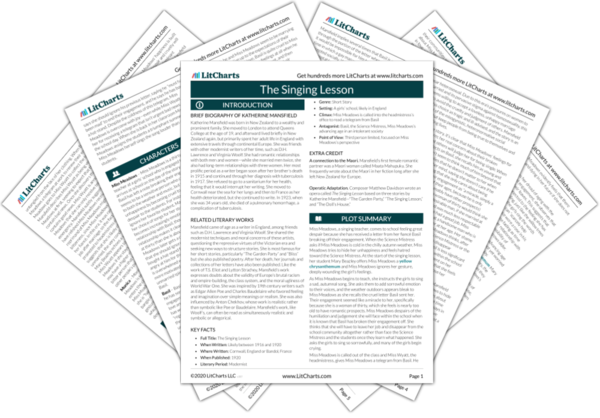 Other Books Related to The Singing Lesson

Mansfield came of age as a writer in England, among friends such as D.H. Lawrence and Virginia Woolf. She shared the modernist techniques and moral concerns of these artists, questioning the repressive virtues of the Victorian era and seeking new ways to structure stories. She is most famous for her short stories, particularly “The Garden Party” and “Bliss” but she also published poetry. After her death, her journals and collections of her letters have also been published. Like the work of T.S. Eliot and Lytton Strachey, Mansfield’s work expresses doubts about the validity of Europe’s brutal racism and empire-building, the class system, and the moral ugliness of World War One. She was inspired by 19th century writers such as Edgar Allen Poe and Charles Baudelaire who favored feeling and imagination over simple meanings or realism. She was also influenced by Anton Chekhov, whose work is realistic rather than symbolic like Poe or Baudelaire. Mansfield’s work, like Woolf’s, can often be read as simultaneously realistic and symbolic or allegorical.
Key Facts about The Singing Lesson

Extra Credit for The Singing Lesson

A connection to the Maori. Mansfield’s first female romantic partner was a Maori woman called Maata Mahupuku. She frequently wrote about the Maori in her fiction long after she left New Zealand for Europe. 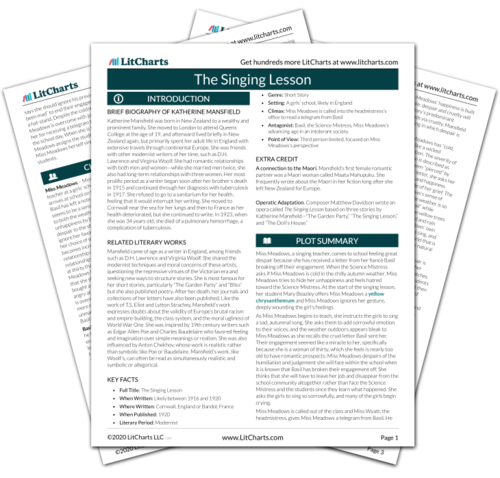 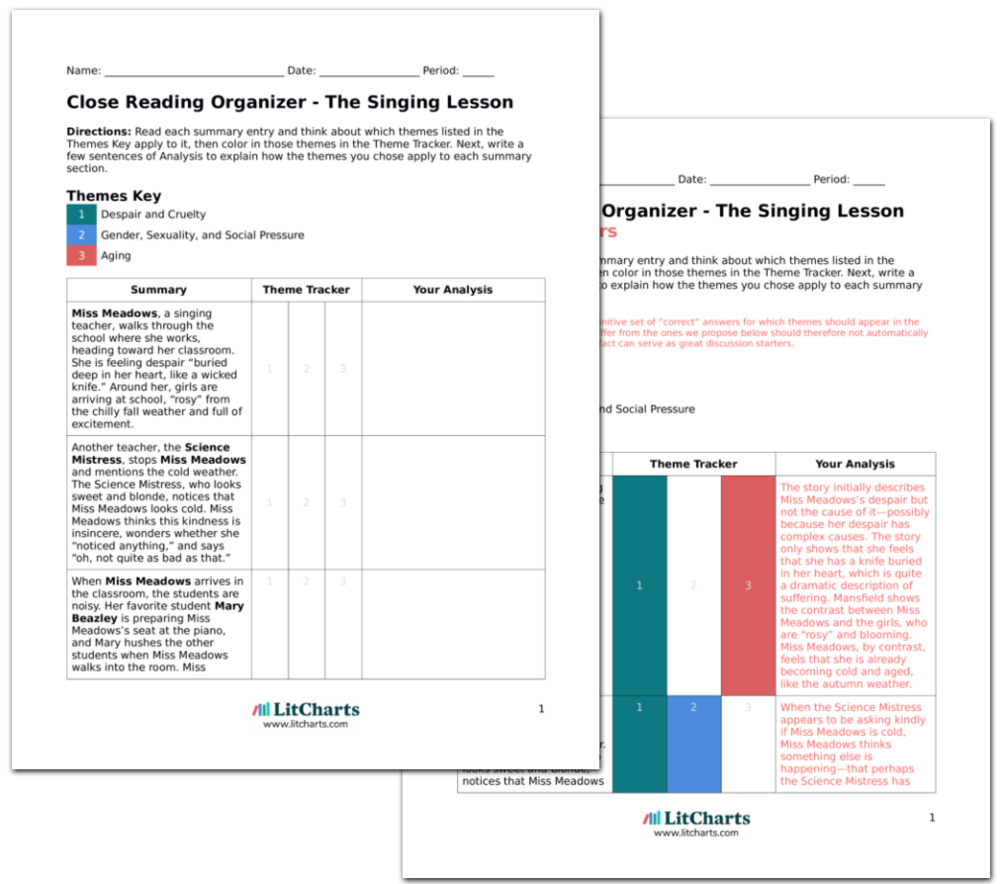