Download this LitChart! (PDF)
Teachers and parents! Struggling with distance learning? Our Teacher Edition on The Sirens of Titan can help.

Welcome to the LitCharts study guide on Kurt Vonnegut's The Sirens of Titan. Created by the original team behind SparkNotes, LitCharts are the world's best literature guides.

The Sirens of Titan: Introduction

A concise biography of Kurt Vonnegut plus historical and literary context for The Sirens of Titan.

The Sirens of Titan: Plot Summary

A quick-reference summary: The Sirens of Titan on a single page.

In-depth summary and analysis of every chapter of The Sirens of Titan. Visual theme-tracking, too.

The Sirens of Titan: Themes

Explanations, analysis, and visualizations of The Sirens of Titan's themes.

The Sirens of Titan: Quotes

The Sirens of Titan's important quotes, sortable by theme, character, or chapter.

The Sirens of Titan: Characters

Description, analysis, and timelines for The Sirens of Titan's characters.

The Sirens of Titan: Symbols

Explanations of The Sirens of Titan's symbols, and tracking of where they appear.

The Sirens of Titan: Theme Wheel

An interactive data visualization of The Sirens of Titan's plot and themes.

Kurt Vonnegut was born to German-American parents in Indianapolis. His family was initially fairly wealthy, but lost a great deal of their money in the Great Depression. Vonnegut began college at Cornell University, where he studied biochemistry and served as an editor at the student newspaper. After being placed on academic probation and then dropping out, Vonnegut enlisted in the army in 1943. Shortly after, his mother killed herself. While fighting in World War II, Vonnegut was captured by German forces and incarcerated as a prisoner of war in Dresden. Back in the U.S., Vonnegut married Jane Marie Cox and enrolled at the University of Chicago on the G.I. Bill. He studied anthropology, although he never officially graduated. He briefly worked at General Electric before deciding to become a full-time writer. He published his first novel, Player Piano, in 1952. Following this, Vonnegut struggled to earn enough money to support his family, which now consisted of six children—three of whom were his nephews, whom he adopted after the death of his sister. During this time, Vonnegut wrote The Sirens of Titan. Although he kept publishing novels his financial struggles led him to almost quit writing; yet thanks to gaining a job at the Iowa Writer’s Workshop he managed to keep going. In 1969, Vonnegut published his most famous novel, Slaughterhouse-Five, which was inspired by his experience as a P.O.W. in Dresden. Following this, he continued writing but struggled with mental health problems, writer’s block, and divorce. In 1979 he remarried, and adopted another child with his new wife. Vonnegut died in 2007 at the age of 84.
Get the entire The Sirens of Titan LitChart as a printable PDF.
"My students can't get enough of your charts and their results have gone through the roof." -Graham S.
Download 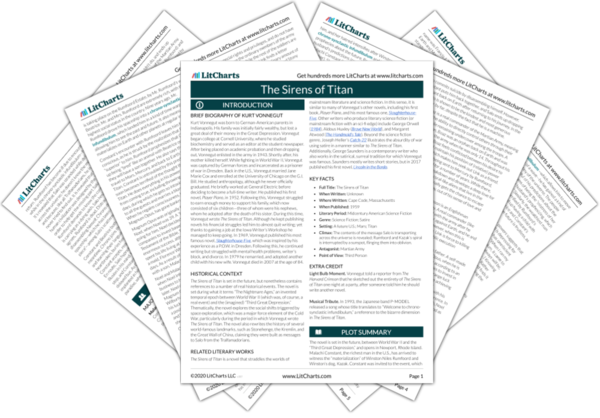 Historical Context of The Sirens of Titan

The Sirens of Titan is set in the future, but nonetheless contains references to a number of real historical events. The novel is set during what it terms “The Nightmare Ages,” an invented temporal epoch between World War II (which was, of course, a real event) and the (imagined) “Third Great Depression.” Thematically, the novel explores the social shifts triggered by space exploration, which was a major force element of the Cold War, particularly during the period in which Vonnegut wrote The Sirens of Titan. The novel also rewrites the history of several world-famous landmarks, such as Stonehenge, the Kremlin, and the Great Wall of China, claiming they were built as messages to Salo from the Tralfamadorians.

Other Books Related to The Sirens of Titan

The Sirens of Titan is a novel that straddles the worlds of mainstream literature and science fiction. In this sense, it is similar to many of Vonnegut’s other novels, including his first book, Player Piano, and his most famous one, Slaughterhouse-Five. Other writers who produce literary science fiction (or mainstream fiction with an sci-fi edge) include George Orwell (1984), Aldous Huxley (Brave New World), and Margaret Atwood (The Handmaid’s Tale). Beyond the science fiction genre, Joseph Heller’s Catch-22 illustrates the absurdity of war using satire in a manner similar to The Sirens of Titan. Additionally, George Saunders is a contemporary writer who also works in the satirical, surreal tradition for which Vonnegut was famous. Saunders mostly writes short stories, but in 2017 published his first novel, Lincoln in the Bardo.
Key Facts about The Sirens of Titan

Extra Credit for The Sirens of Titan

Light Bulb Moment. Vonnegut told a reporter from The Harvard Crimson that he sketched out the entirety of The Sirens of Titan one night at a party, after someone told him he should write another novel.

Musical Tribute. In 1993, the Japanese band P-MODEL released a song whose title translates to “Welcome to chrono-synclastic infundibulum,” a reference to the bizarre dimension in The Sirens of Titan. 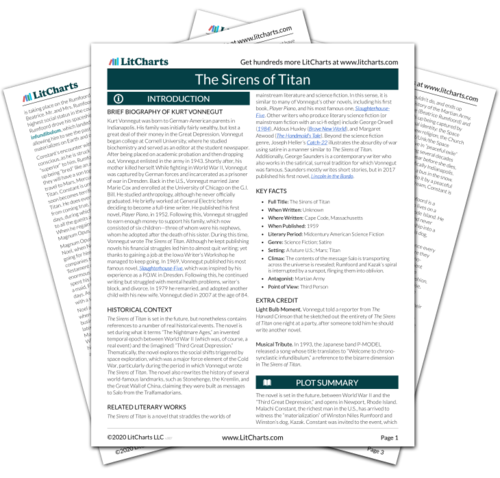 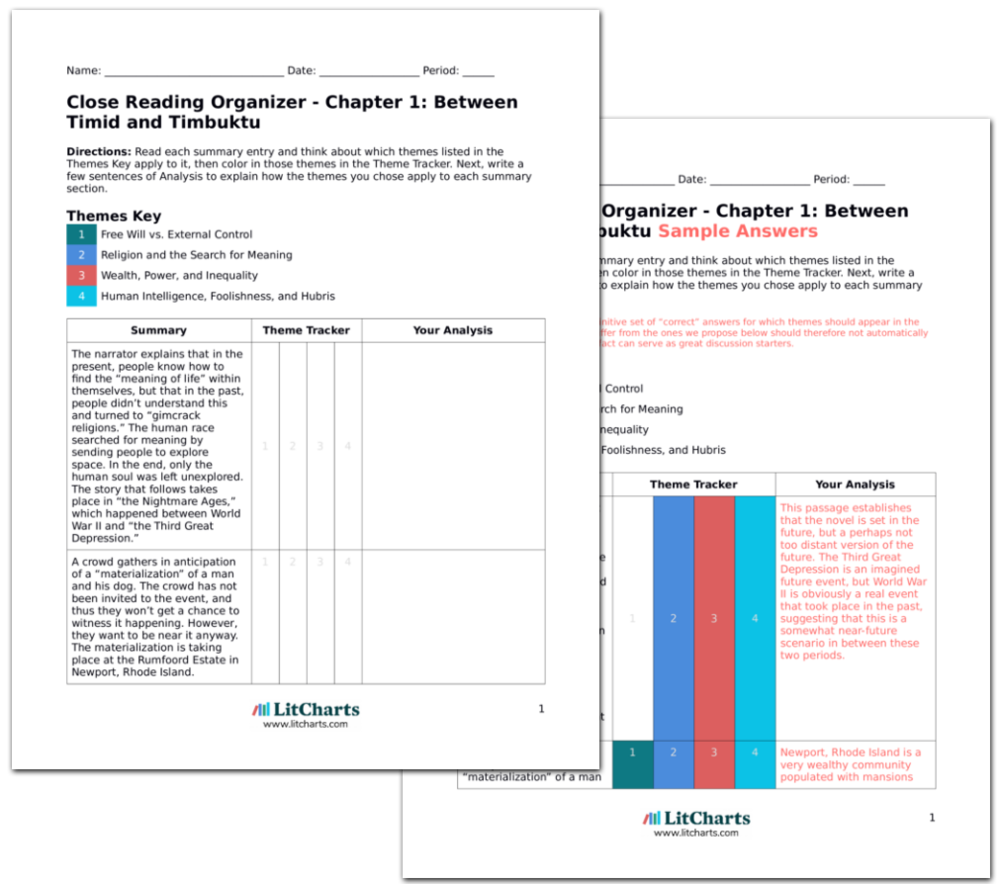