Download this LitChart! (PDF)
Teachers and parents! Struggling with distance learning? Our Teacher Edition on The Song of Achilles can help.

Welcome to the LitCharts study guide on Madeline Miller's The Song of Achilles. Created by the original team behind SparkNotes, LitCharts are the world's best literature guides.

The Song of Achilles: Introduction

A concise biography of Madeline Miller plus historical and literary context for The Song of Achilles.

The Song of Achilles: Plot Summary

A quick-reference summary: The Song of Achilles on a single page.

In-depth summary and analysis of every chapter of The Song of Achilles. Visual theme-tracking, too.

The Song of Achilles: Themes

Explanations, analysis, and visualizations of The Song of Achilles's themes.

The Song of Achilles: Quotes

The Song of Achilles's important quotes, sortable by theme, character, or chapter.

The Song of Achilles: Characters

Description, analysis, and timelines for The Song of Achilles's characters.

The Song of Achilles: Symbols

Explanations of The Song of Achilles's symbols, and tracking of where they appear.

The Song of Achilles: Theme Wheel

An interactive data visualization of The Song of Achilles's plot and themes.

Madeline Miller was born in Boston and grew up in both Philadelphia and New York City. After completing her undergraduate and graduate work in Classics at Brown University, she taught and tutored high school students in Greek, Latin, and Shakespeare. Then she received an MFA from the Yale School of Drama, where she focused on adapting classics for modern audiences. She published her first book, The Song of Achilles, in 2011. Miller wanted to retell the Trojan War with a particular focus on Achilles and Patroclus; the two are commonly interpreted as lovers, but their romantic relationship is peripheral in most Greco-Roman myths of the Trojan War. The book was ten years in the making, as Miller drafted and redrafted to focus the story’s narration. In 2012, the book received the Orange Prize for Fiction. Miller’s second novel, Circe, was released in 2018; it’s narrated from the perspective of Circe, a minor character from The Odyssey. Miller lives outside Philadelphia and continues to write and teach.
Get the entire The Song of Achilles LitChart as a printable PDF.
"My students can't get enough of your charts and their results have gone through the roof." -Graham S.
Download 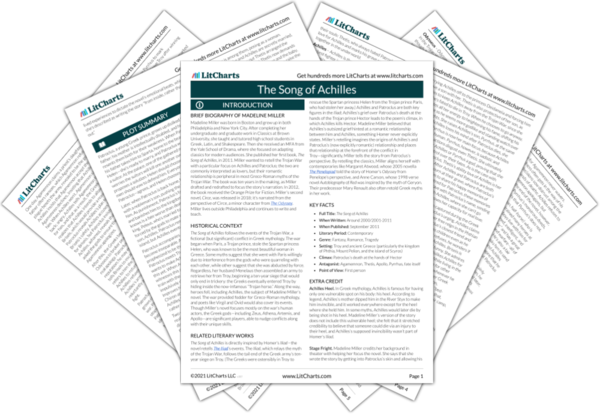 Historical Context of The Song of Achilles

The Song of Achilles follows the events of the Trojan War, a fictional (but significant) conflict in Greek mythology. The war began when Paris, a Trojan prince, stole the Spartan princess Helen, who was known to be the most beautiful woman in Greece. Some myths suggest that she went with Paris willingly due to interference from the gods who were quarreling with each other, while other suggest that she was abducted by force. Regardless, her husband Menelaus then assembled an army to retrieve her from Troy, beginning a ten-year siege that would only end in trickery: the Greeks eventually entered Troy by hiding inside the now-infamous “Trojan horse.” Along the way, heroes fell, including Achilles, the subject of Madeline Miller’s novel. The war provided fodder for Greco-Roman mythology, and poets like Virgil and Ovid would also cover its events. Though Miller’s novel focuses mostly on the war’s human actors, the Greek gods—including Zeus, Athena, Artemis, and Apollo—are significant players, able to nudge conflicts along with their unique skills.

Other Books Related to The Song of Achilles

The Song of Achilles is directly inspired by Homer’s Iliad—the novel retells The Iliad’s events. The Iliad, which relays the myth of the Trojan War, follows the tail end of the Greek army’s ten-year siege on Troy. (The Greeks were ostensibly in Troy to rescue the Spartan princess Helen from the Trojan prince Paris, who had stolen her away.) Achilles and Patroclus are both key figures in the Iliad; Achilles’s grief over Patroclus’s death at the hands of the Trojan prince Hector leads to the poem’s climax, in which Achilles kills Hector. Madeline Miller believed that Achilles’s outsized grief hinted at a romantic relationship between him and Achilles, something Homer never explicitly states. Miller’s retelling imagines the origins of Achilles’s and Patroclus’s (now explicitly romantic) relationship and places that relationship at the forefront of the conflict in Troy—significantly, Miller tells the story from Patroclus’s perspective. By retelling the classics, Miller aligns herself with contemporaries like Margaret Atwood, whose 2005 novella The Penelopiad told the story of Homer’s Odyssey from Penelope’s perspective, and Anne Carson, whose 1998 verse novel Autobiography of Red was inspired by the myth of Geryon. Their predecessor Mary Renault also often retold Greek myths in her work.
Key Facts about The Song of Achilles

Extra Credit for The Song of Achilles

Achilles Heel. In Greek mythology, Achilles is famous for having only one vulnerable spot on his body: his heel. According to legend, Achilles’s mother dipped him in the River Styx to make him invincible, and it worked everywhere except for the heel where she held him. In some myths, Achilles would later die by being shot in his heel. Madeline Miller’s version of the story does not include this vulnerable heel; she felt that it stretched credibility to believe that someone could die via an injury to their heel, and Achilles’s supposed invincibility wasn’t part of Homer’s Iliad.

Stage Fright. Madeline Miller credits her background in theater with helping her focus the novel. She says that she wrote the story by getting into Patroclus’s skin and allowing his lived experiences to dictate the novel’s emotional beats, which she’s described as writing the story “from inside, rather than out.” 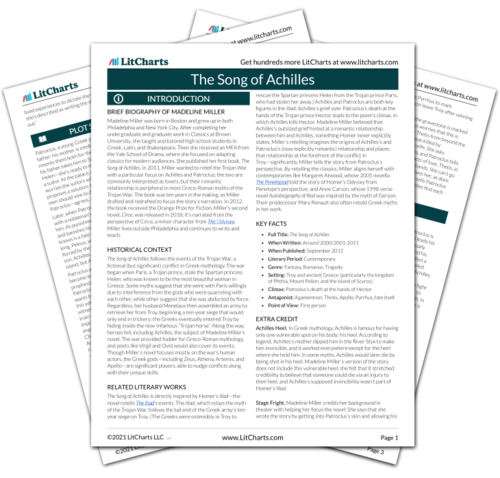 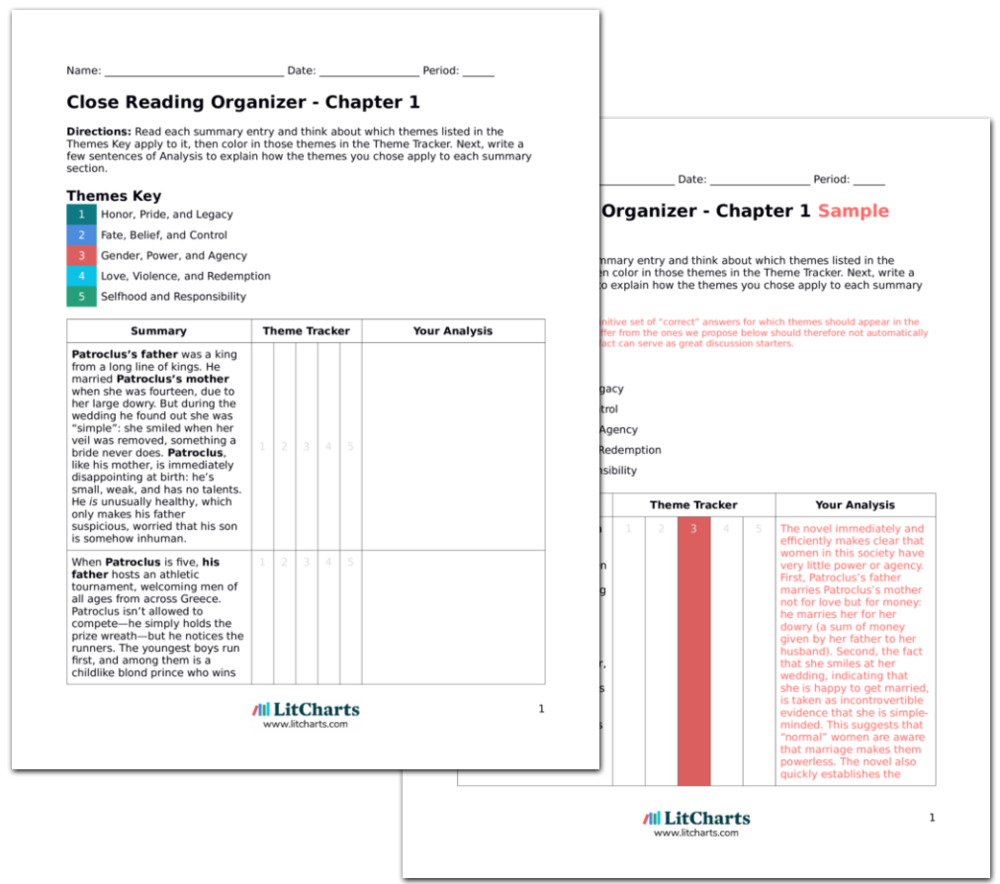