The setting of The Sound and the Fury is Mississippi in the early 1900s, when slavery was still a recent memory, and the Compson family has black live-in servants who are basically slaves in all but technicality. Slavery ended with the Civil War in the 1860s, but African-Americans remained as second-class citizens. Most of the policies of reparations and equal rights failed, which left the wealthy, slave-owning aristocracy broken but the former slaves themselves not much better off than before. This left an ever-present tension between blacks and whites in everyday society. Within the novel, the black servants are scorned by the Compsons, but it becomes clear that the Gibsons are more sane and capable than the Compsons themselves, as they have not been corrupted by their own family pride and slave-owning history. The Compson family ends with the novel, but the Gibsons “endured.” The Compsons also see themselves as superior to the other whites of Jefferson, clinging to their glorious past and blind to their present corruption.

Dilsey, the matriarch of the Gibsons, is the strongest positive character of the book and has her own section, though she isn’t given a narrative voice like the Compson brothers. Instead, the novel’s most progressive accomplishment is simply treating the Gibsons with the same unsympathetic, deeply human characterization as the Compsons. Nothing is sentimental or idealized, and it is only Dilsey’s calm fortitude in the face of corruption and madness that can endure the tragedy of the Compsons’ world.

The ThemeTracker below shows where, and to what degree, the theme of Race and Class appears in each section of The Sound and the Fury. Click or tap on any chapter to read its Summary & Analysis.
How often theme appears:
section length:
Section
April Seventh, 1928
.1928
June Second, 1910
.1910
April Sixth, 1928
.1928
April Eighth, 1928
.1928
Appendix
1699
Get the entire The Sound and the Fury LitChart as a printable PDF.
"My students can't get enough of your charts and their results have gone through the roof." -Graham S.
Download 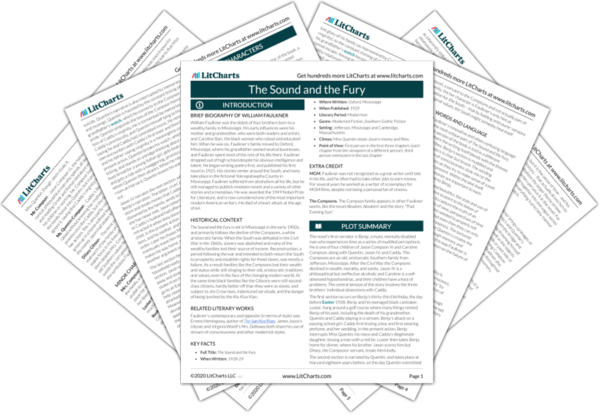 Race and Class Quotes in The Sound and the Fury

Below you will find the important quotes in The Sound and the Fury related to the theme of Race and Class.
June Second, 1910 Quotes

That was when I realised that a nigger is not a person so much as a form of behavior; a sort of obverse reflection of the white people he lives among. But I thought at first that I ought to miss having a lot of them around me because I thought that Northerners thought I did, but I didn’t know that I really had missed Roskus and Dilsey and them until that morning in Virginia.

“All right,” I says. “We’ll just put this off a while. But don’t think you can run it over me. I’m not an old woman, nor an old half dead nigger, either. You dam little slut,” I says.
“Dilsey,” she says. “Dilsey, I want my mother.”
Dilsey went to her. “Now, now,” she says. “He aint gwine so much as lay his hand on you while Ise here.” Mother came on down the stairs.
“Jason,” she says. “Dilsey.”
“Now, now,” Dilsey says. “I aint gwine let him tech you.” She put her hand on Quentin. She knocked it down.
“You damn old nigger,” she says. She ran toward the door.

“You’s a cold man, Jason, if man you is,” she says. “I thank de Lawd I got mo heart dan dat, even ef hit is black.”
“At least I’m man enough to keep that flour barrel full,” I says. “And if you do that again, you wont be eating out of it either.”

LUSTER. A man, aged 14. Who was not only capable of the complete care and security of an idiot twice his age and three times his size, but could keep him entertained.