Download this LitChart! (PDF)
Teachers and parents! Struggling with distance learning? Our Teacher Edition on The Sound Machine can help.

Welcome to the LitCharts study guide on Roald Dahl's The Sound Machine. Created by the original team behind SparkNotes, LitCharts are the world's best literature guides.

A concise biography of Roald Dahl plus historical and literary context for The Sound Machine.

A quick-reference summary: The Sound Machine on a single page.

In-depth summary and analysis of every of The Sound Machine. Visual theme-tracking, too.

Explanations, analysis, and visualizations of The Sound Machine's themes.

The Sound Machine's important quotes, sortable by theme, character, or .

Description, analysis, and timelines for The Sound Machine's characters.

Explanations of The Sound Machine's symbols, and tracking of where they appear.

An interactive data visualization of The Sound Machine's plot and themes.

Roald Dahl was born in Wales to Norwegian immigrant parents. Dahl’s dislike for schooling and early penchant for mischief foreshadowed his frequent motif of rambunctious children in a power struggle with restrictive adults in his literary works. Eager to get away from home and see the world, he served in a Royal Air Force regiment during World War II as a fighter pilot after finishing college. He began his writing career with stories catered towards adults but shifted to writing fiction for children after having kids of his own and being inspired by the way they reacted to the stories he told them. Thus began an illustrious career filled with several immensely popular novels, including Charlie and the Chocolate Factory, Matilda, James and the Giant Peach, and The BFG. He continued to write short fiction for adults as well, often featuring an extension of the dark and macabre elements of his work for children. He passed away in 1990 at the age of 74.
Get the entire The Sound Machine LitChart as a printable PDF.
"My students can't get enough of your charts and their results have gone through the roof." -Graham S.
Download 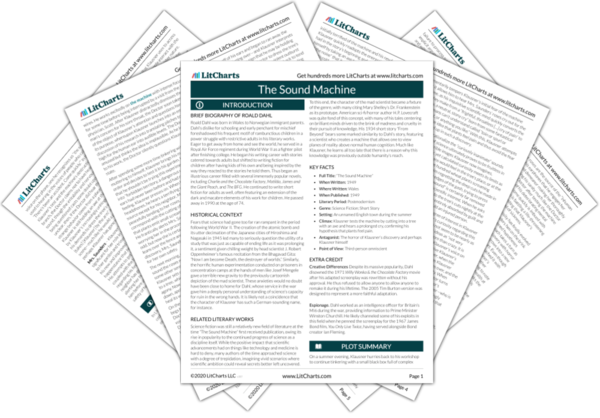 Historical Context of The Sound Machine

Fears that science had gone too far ran rampant in the period following World War II. The creation of the atomic bomb and its utter decimation of the Japanese cities of Hiroshima and Nagasaki in 1945 led many to seriously question the utility of a study that was just as capable of ending life as it was prolonging it, a sentiment given chilling weight by head scientist J. Robert Oppenheimer’s famous recitation from the Bhagavad Gita: “Now I am become Death, the destroyer of worlds.” Similarly, the horrific human experimentation conducted on prisoners in concentration camps at the hands of men like Josef Mengele gave a terrible new gravity to the previously cartoonish depiction of the mad scientist. These anxieties would no doubt have been close to home for Dahl, whose service in the war gave him a deeply personal understanding of science’s capacity for ruin in the wrong hands. It is likely not a coincidence that the character of Klausner has such a German-sounding name, for instance.

Other Books Related to The Sound Machine

Science fiction was still a relatively new field of literature at the time “The Sound Machine” first received publication, owing its rise in popularity to the continued progress of science as a discipline itself. While the positive impact that scientific advancements had on things like technology and medicine is hard to deny, many authors of the time approached science with a degree of trepidation, imagining vivid scenarios where scientific ambition could reveal secrets better left uncovered. To this end, the character of the mad scientist became a fixture of the genre, with many citing Mary Shelley’s Dr. Frankenstein as its prototype. American sci-fi/horror author H.P. Lovecraft was quite fond of this concept, with many of his tales centering on brilliant minds driven to the brink of madness and cruelty in their pursuit of knowledge. His 1934 short story “From Beyond” bears some marked similarity to Dahl’s story, featuring a scientist who creates a machine that allows one to view planes of reality above normal human cognition. Much like Klausner, he learns all too late that there is a reason why this knowledge was previously outside humanity’s reach.
Key Facts about The Sound Machine

Extra Credit for The Sound Machine

Creative Differences Despite its massive popularity, Dahl disowned the 1971 Willy Wonka & the Chocolate Factory movie after his adapted screenplay was rewritten without his approval. He thus refused to allow anyone to allow anyone to remake it during his lifetime. The 2005 Tim Burton version was designed to represent a more faithful adaptation.

Espionage. Dahl worked as an intelligence officer for Britain’s MI6 during the war, providing information to Prime Minister Winston Churchill. He likely channeled some of his exploits in this field when he penned the screenplay for the 1967 James Bond film, You Only Live Twice, having served alongside Bond creator Ian Fleming. 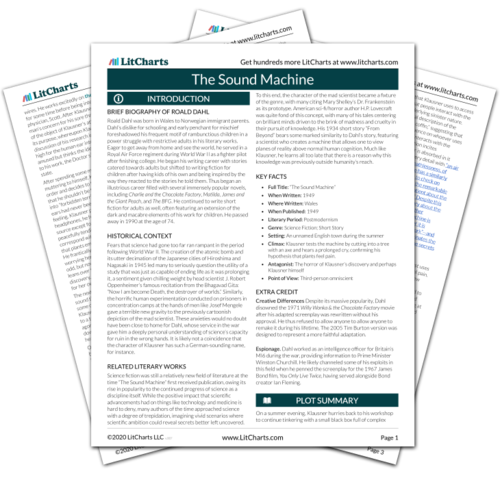 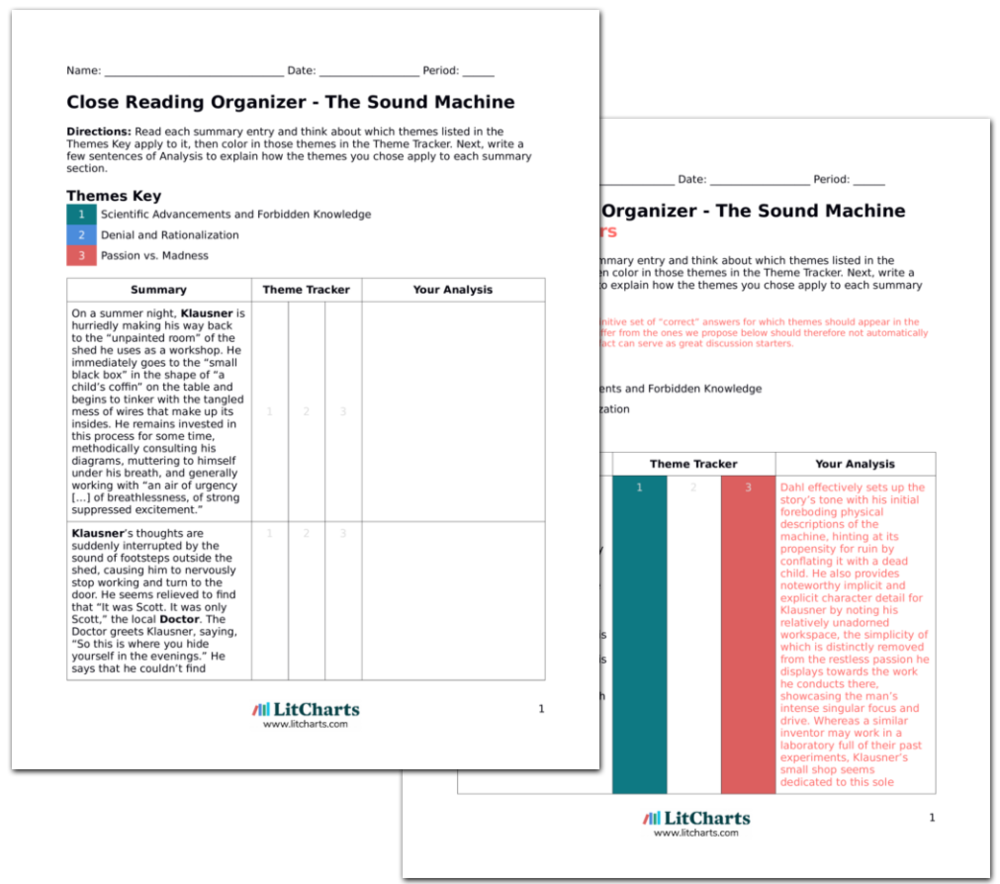