Welcome to the LitCharts study guide on Yukio Mishima's The Sound of Waves. Created by the original team behind SparkNotes, LitCharts are the world's best literature guides.

The Sound of Waves: Introduction

A concise biography of Yukio Mishima plus historical and literary context for The Sound of Waves.

The Sound of Waves: Plot Summary

A quick-reference summary: The Sound of Waves on a single page.

In-depth summary and analysis of every chapter of The Sound of Waves. Visual theme-tracking, too.

The Sound of Waves: Themes

Explanations, analysis, and visualizations of The Sound of Waves's themes.

The Sound of Waves: Quotes

The Sound of Waves's important quotes, sortable by theme, character, or chapter.

The Sound of Waves: Characters

Description, analysis, and timelines for The Sound of Waves's characters.

The Sound of Waves: Symbols

Explanations of The Sound of Waves's symbols, and tracking of where they appear.

The Sound of Waves: Theme Wheel

An interactive data visualization of The Sound of Waves's plot and themes.

Yukio Mishima, widely considered to be one of the most important and influential Japanese authors of the 20th century, was a prolific, nihilistic, and controversial artistic and political figure. Born in 1925 to an affluent and influential family descended from Tokugawa Ieyasu (the founder of the Tokugawa shogunate of Japan), Mishima lived a sheltered existence and was raised primarily by his grandmother. Mishima was intrigued by Kabuki drama and European literature from an early age, and while his teachers admired him, his militaristic father worried about his son’s interest in “effeminate” things. Mishima was declared physically unfit for service in World War II, and after the Surrender of Japan in August of 1945, Mishima declared his intent to rebuild and preserve Japanese culture while resisting Westernization at any cost. After the war, Mishima continued writing while also dabbling in acting, modeling, and bodybuilding. Though he married a woman in 1958, Mishima frequented gay bars and conducted affairs with men. In 1967, Mishima helped to form a private militia dedicated to the protection of the Emperor of Japan, and, in 1970, Mishima and several members of his “Shield Society” attempted a military coup to restore power to the emperor. When the coup failed, Mishima committed seppuku, or ritual suicide by disembowelment and decapitation. Mishima is buried in Tokyo. In spite of his controversial life and politics, his body of work—consisting of 34 novels, roughly 50 plays, 25 books of stories, and 35 books of essays—lives on, regarded as some of the most formative Japanese literature of the modern era.
Get the entire The Sound of Waves LitChart as a printable PDF.
"My students can't get enough of your charts and their results have gone through the roof." -Graham S.
Download 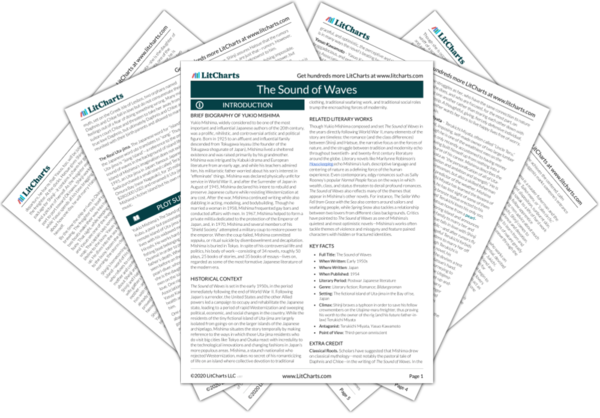 Historical Context of The Sound of Waves

The Sound of Waves is set in the early 1950s, in the period immediately following the end of World War II. Following Japan’s surrender, the United States and the other Allied powers led a campaign to occupy and rehabilitate the Japanese state, leading to a period of rapid Westernization and sweeping political, economic, and social changes in the country. While the residents of the tiny fictional island of Uta-jima are largely isolated from goings-on on the larger islands of the Japanese archipelago, Mishima situates the story temporally by making reference to the ways in which those Uta-jima residents who do visit big cities like Tokyo and Osaka react with incredulity to the technological innovations and changing fashions in Japan’s more populous areas. Mishima, a staunch nationalist who rejected Westernization, makes no secret of his romanticizing of life on an island where collective devotion to traditional clothing, traditional seafaring work, and traditional social roles trump the encroaching forces of modernity.

Other Books Related to The Sound of Waves

Though Yukio Mishima composed and set The Sound of Waves in the years directly following World War II, many elements of the story are timeless: the romance (and the class differences) between Shinji and Hatsue, the narrative focus on the forces of nature, and the struggle between tradition and modernity echo throughout twentieth- and twenty-first century literature around the globe. Literary novels like Marilynne Robinson’s Housekeeping echo Mishima’s lush, descriptive language and centering of nature as a defining force of the human experience. Even contemporary, edgy romances such as Sally Rooney’s popular Normal People focus on the ways in which wealth, class, and status threaten to derail profound romances. The Sound of Waves also reflects many of the themes that appear in Mishima’s other novels. For instance, The Sailor Who Fell from Grace with the Sea also centers around sailors and seafaring people, while Spring Snow also tackles a relationship between two lovers from different class backgrounds. Critics have pointed to The Sound of Waves as one of Mishima’s quietest and most optimistic novels—Mishima’s works often tackle themes of violence and misogyny and feature pained characters with hidden or fractured identities.
Key Facts about The Sound of Waves

Extra Credit for The Sound of Waves

Classical Roots. Scholars have suggested that Mishima drew on classical mythology—most notably the pastoral tale of Daphnis and Chloe—in the writing of The Sound of Waves. In the myth, set on the Greek isle of Lesbos, two orphans named Daphnis and Chloe fall in love but do not consummate their feelings out of a fear of doing something wrong. Many male suitors court Chloe and threaten to take her away from her true love Daphnis, but ultimately Daphnis and Chloe are reunited with their birth parents and allowed to marry at last.

The Real Uta-jima. The Japanese word for “island” is jima, while the Japanese word uta translates to “song.” Thus, the island of Uta-jima is “Song Island”—a reference to the omnipresent sound of waves in the background of island life. While the island of Mishima’s imagination does not exist, there is, as of 1995, an Uta-jima in Japan: famous Japanese singer Masashi Sada purchased a small island called Tera Shima, located in Omura Bay (near Nagasaki), for 20 million yen (or about $280,000 USD) and renamed it Uta-jima, referencing not Mishima’s fictive island but his own relationship to songs and music.