Download this LitChart! (PDF)
Teachers and parents! Struggling with distance learning? Our Teacher Edition on The Storm can help.

Welcome to the LitCharts study guide on Kate Chopin's The Storm. Created by the original team behind SparkNotes, LitCharts are the world's best literature guides.

A concise biography of Kate Chopin plus historical and literary context for The Storm.

A quick-reference summary: The Storm on a single page.

In-depth summary and analysis of every part of The Storm. Visual theme-tracking, too.

Explanations, analysis, and visualizations of The Storm's themes.

The Storm's important quotes, sortable by theme, character, or part.

Description, analysis, and timelines for The Storm's characters.

Explanations of The Storm's symbols, and tracking of where they appear.

An interactive data visualization of The Storm's plot and themes.

Kate Chopin was born in St. Louis, Missouri. While Kate Chopin is one of the best-known women writers of the 20th-century, Chopin was not famous during her lifetime. Furthermore, while Chopin is one of today’s the most notable writers in New Orleans, she was born and died in St. Louis, Missouri. Chopin moved to Louisiana when she was 20 years old upon marrying her husband, a New Orleans native. After her husband died and left Chopin with massive debt, Chopin struggled to keep her late husband’s general store open. Under a pile of debt and saddled with six children, Chopin returned to native St. Louis to live closer to her mother. When her mother died shortly after that, Chopin sought advice from her doctor for depression. To help Chopin cope with the death of her mother and husband, the doctor recommended Chopin take up writing. Chopin took her doctor’s advice to heart, getting straight to work on two novels and numerous short stories. After publishing several stories and two books, Kate Chopin died at the age of 52 from a brain hemorrhage. She left behind several unpublished pieces during her lifetime which would later garner fame, including “The Storm.”
Get the entire The Storm LitChart as a printable PDF.
"My students can't get enough of your charts and their results have gone through the roof." -Graham S.
Download 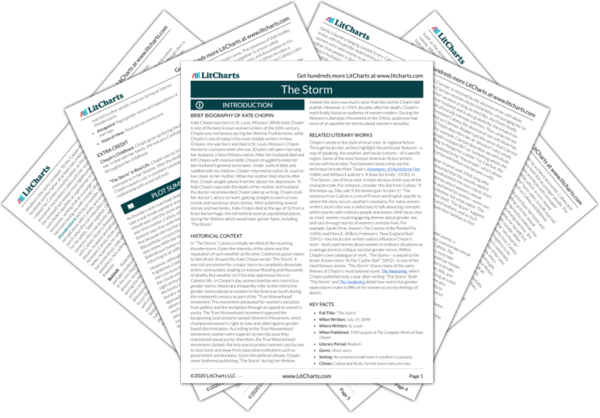 Historical Context of The Storm

In “The Storm,” Calixta is initially terrified of the incoming thunderstorm. Given the intensity of the storm and the reputation of such weather at the time, Calixta has good reason to feel afraid. Around the Kate Chopin wrote “The Storm,” it was not uncommon for a major storm to completely devastate entire communities, leading to massive flooding and thousands of deaths. But weather isn’t the only oppressive force in Calixta’s life. In Chopin’s day, women lived by very restrictive gender norms. Historians frequently refer to the restrictive gender norms placed on women in the American South during the nineteenth century as part of the “True Womanhood” movement. This movement advocated for women’s exclusion from politics and the workplace through an appeal to women’s purity. The True Womanhood movement opposed the burgeoning (and similarly named) Women’s Movement, which championed women’s right to vote and railed against gender-based discrimination. According to the True Womanhood movement, women were superior to men because they maintained sexual purity; therefore, the True Womanhood movement claimed, the only way to protect women’s purity was to stay home and away from masculine institutions such as government and business. Given the political climate, Chopin never bothered publishing “The Storm” during her lifetime. Indeed, the story was much racier than the stories Chopin did publish. However, in 1969, decades after her death, Chopin’s work finally found an audience of women readers. During the Women’s Liberation Movement of the 1960s, audiences had more of an appetite for stories about women’s sexuality.

Other Books Related to The Storm

Chopin’s wrote in the style of local color, or regional fiction. Through local color, writers highlight the particular features—a way of speaking, the weather, and social customs—of a specific region. Some of the most famous American fiction writers wrote with local color. Two beloved classics that use the technique include Mark Twain’s Adventures of Huckleberry Finn (1884) and William Faulkner’s “A Rose for Emily” (1930). In “The Storm,” use of local color is most obvious in the way of the characters talk. For instance, consider this line from Calixta: “If this keeps up, Dieu sait! if the levees goin’ to stan’ it!” The sentence from Calixta is a mix of French and English specific to where the story occurs, southern Louisiana. For many women writers, local color was a useful way to talk about big concepts within stories with ordinary people and events. With local color as a tool, women could engage big themes about gender, sex, and race through stories of women’s everday lives. For example, Sarah Orne Jewett’s The Country of the Pointed Firs (1896) and Mary E. Wilkins Freeman’s “New England Nun” (1891)—two local color writers said to influence Chopin’s work—both used stories about women in ordinary situations as a vantage point to critique societal gender norms. Within Chopin’s own catalogue of work, “The Storm”—a sequel to the lesser-known story “At the 'Cadian Ball” (1892)—is one of her most famous stories. “The Storm” shares many of the same themes of Chopin’s most beloved novel, The Awakening, which Chopin published only a year after writing “The Storm.” Both “The Storm” and The Awakening detail how restrictive gender expectations make it difficult for women to access feelings of desire.
Key Facts about The Storm

Extra Credit for The Storm

Chopin’s Childhood. Chopin grew up during the American Civil war. In line with her family, she was pro-Confederate throughout her childhood.

“The Storm” in Real Life. Chopin was no stranger to controversy in her lifetime. After the death of her husband, Chopin caused a stir in southern Louisiana for having a relationship with a married man. 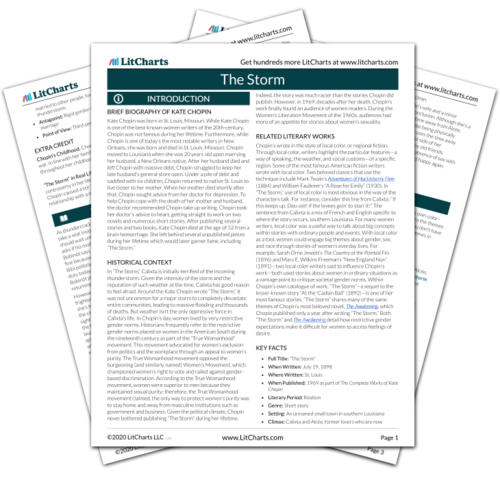 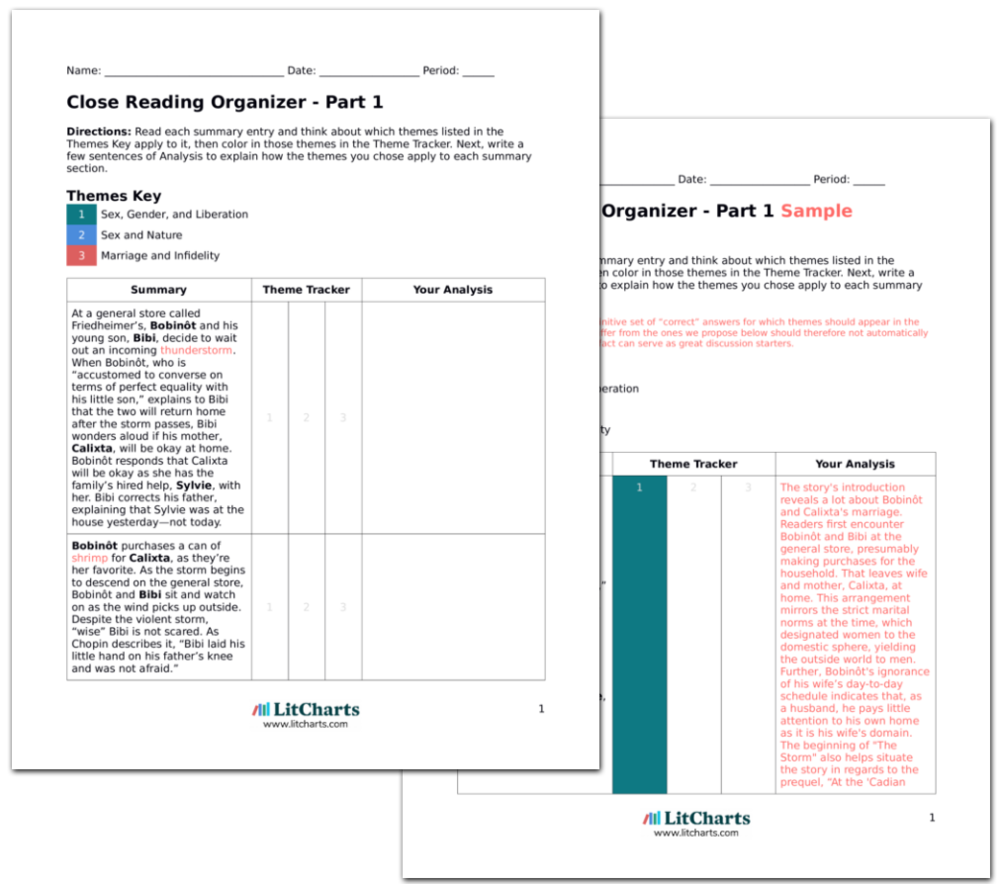