Get LitCharts A+
A scientific revolution is the process by which one paradigm replaces another. This happens in gradually: first, some research carried out in the name of normal science uncovers an anomaly. As more people learn about this anomaly, debates break out, and scientists begin to question the initial paradigm’s basic rules and ideas. Then, one person has a flash of genius and proposes a new paradigm that explains and absorbs the anomaly. Eventually, more and more scientists are persuaded by this new theory, and the new paradigm emerges victorious.

). Note: all page numbers and citation info for the quotes below refer to the University of Chicago Press edition of The Structure of Scientific Revolutions published in 2012.
Chapter 1 Quotes

History, if viewed as a repository for more than anecdote or chronology, could produce a decisive transformation in the image of science by which we are now possessed.

As in political revolutions, so in paradigm choice—there is no standard higher than the assent of the relevant community.

Chemists could not, therefore, simply accept Dalton’s theory on the evidence, for much of that was still negative. Instead, even after accepting the theory, they had still to beat nature into line, a process which, in the event, took almost another generation. When it was done, even the percentage composition of well-known compounds was different. The data themselves had changed. That is the last of the senses in which we may want to say that after a revolution scientists work in a different world. 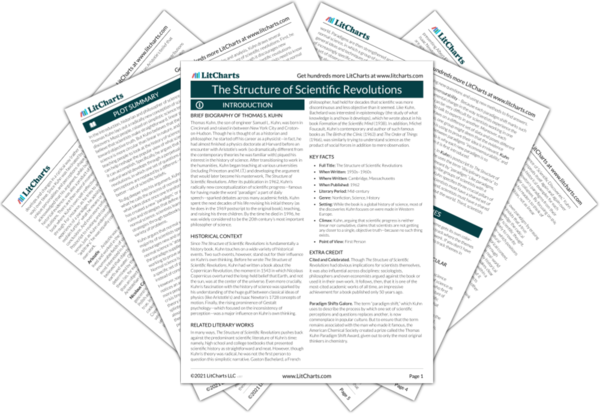 There have been many scientific revolutions throughout history. Several of the most well-known revolutions are associated with scientists Nicolaus Copernicus, Isaac... (full context)

...are many sub-fields and smaller paradigms within each larger discipline. Therefore, there can be smaller scientific revolutions , in which one group rethinks its paradigm while other larger groups continue with their... (full context)

...successful at finding answers. But how does normal science, which avoids novelty, end up producing scientific revolutions ? In other words, Kuhn wants to investigate how discoveries “produced inadvertently by a game... (full context)

...paradigm becomes, the easier it is for scientists to spot an anomaly. This is why scientific revolutions always come out of normal science. (full context)

...do not have the necessary equipment or knowledge to create a new paradigm. A complete scientific revolution , then, is relatively rare. But each crisis does “loosen” the rules and stereotypes of... (full context)

...his choice of the word “revolution,” which immediately suggests a parallel to politics. In fact, scientific revolutions are akin to political revolutions in that both see communities beginning to doubt or grow... (full context)

This persuasive element of scientific revolutions then helps explain why they are not cumulative. In order to have a convincing new... (full context)

Kuhn turns his attention to the fact that the various scientific revolutions discussed in his book are rarely seen as such; instead, they are made “nearly invisible”... (full context)

In particular, Kuhn notes that textbooks collapse after each scientific revolution and must be completely rewritten to reflect the new paradigm. Crucially, however, these new textbooks... (full context)

In addition to erasing past scientific revolutions , this kind of history suggests that since the beginning of time, scientists have been... (full context)

Finally, Kuhn argues that science and progress are associated precisely because there are so many scientific revolutions . When one group emerges victorious from a moment of crisis, they are determined to... (full context) 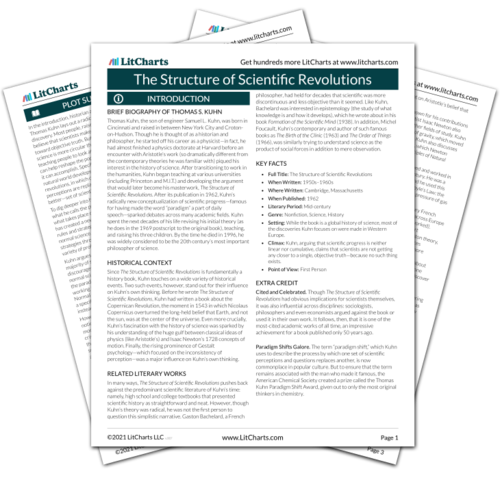 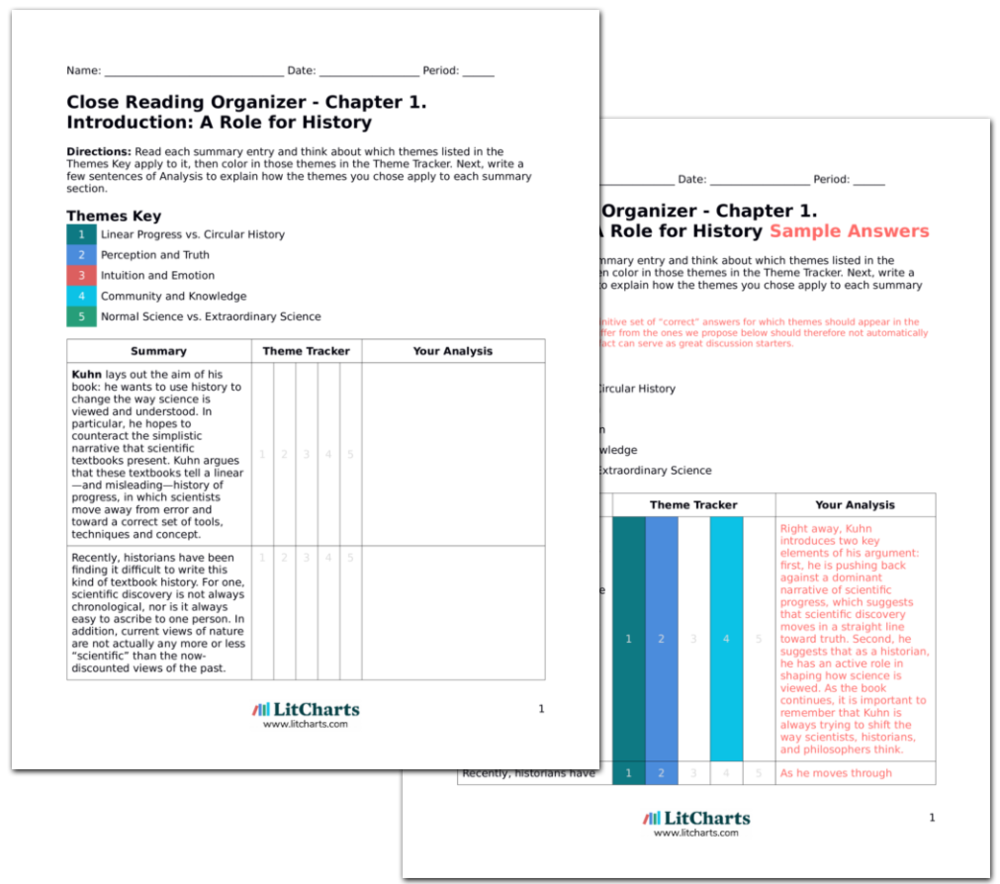