Download this LitChart! (PDF)
Teachers and parents! Struggling with distance learning? Our Teacher Edition on The Subjection of Women can help.

Welcome to the LitCharts study guide on John Stuart Mill's The Subjection of Women. Created by the original team behind SparkNotes, LitCharts are the world's best literature guides.

The Subjection of Women: Introduction

A concise biography of John Stuart Mill plus historical and literary context for The Subjection of Women.

The Subjection of Women: Plot Summary

A quick-reference summary: The Subjection of Women on a single page.

In-depth summary and analysis of every chapter of The Subjection of Women. Visual theme-tracking, too.

The Subjection of Women: Themes

Explanations, analysis, and visualizations of The Subjection of Women's themes.

The Subjection of Women: Quotes

The Subjection of Women's important quotes, sortable by theme, character, or chapter.

The Subjection of Women: Characters

Description, analysis, and timelines for The Subjection of Women's characters.

The Subjection of Women: Symbols

Explanations of The Subjection of Women's symbols, and tracking of where they appear.

The Subjection of Women: Theme Wheel

An interactive data visualization of The Subjection of Women's plot and themes.

John Stuart Mill was the son of James Mill, a Scottish philosopher who worked in the fields of history, economics, and political theory. James ensured that his son had a highly rigorous education that included receiving instruction from famous utilitarian philosopher Jeremy Bentham. From an early age, Mill determined that the purpose of his life was to use his education and intellect to help construct a just, happy society. However, at the age of 20, he underwent a crisis when he realized that fulfilling this goal would not bring him personal joy, and he contemplated suicide. He was able to survive this period in part by finding renewed inspiration through the poetry of William Wordsworth. After studying at University College London, Mill embarked on a career as a colonial administrator in India. He defended British imperialism in India but disliked the system of direct rule by the British monarchy, which ultimately led him to return to England. In 1851 he married his close friend of 21 years, Harriet Taylor, after her husband died in 1849. Harriet had a profound influence on Mill’s work, including his advocacy of women’s rights, as did Mill’s stepdaughter, Helen Taylor. In the late 1860s, Mill served as a Liberal Member of Parliament for City and Westminster. As an MP, he campaigned enthusiastically for female suffrage. He died in Avignon, France at the age of 66.
Get the entire The Subjection of Women LitChart as a printable PDF.
"My students can't get enough of your charts and their results have gone through the roof." -Graham S.
Download 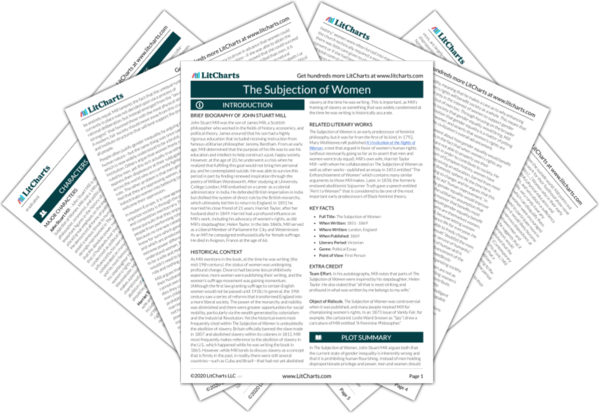 Historical Context of The Subjection of Women

As Mill mentions in the book, at the time he was writing (the mid-19th century), the status of women was undergoing profound change. Divorce had become less prohibitively expensive, more women were publishing their writing, and the women’s suffrage movement was gaining momentum. (Although the first law granting suffrage to certain English women would not be passed until 1918.) In general, the 19th century saw a series of reforms that transformed England into a more liberal society. The power of the monarchy and nobility was diminished and there were greater opportunities for social mobility, particularly via the wealth generated by colonialism and the Industrial Revolution. Yet the historical event most frequently cited within The Subjection of Women is undoubtedly the abolition of slavery. Britain officially banned the slave trade in 1807 and abolished slavery within its colonies in 1811. Mill most frequently makes reference to the abolition of slavery in the U.S., which happened while he was writing the book in 1865. However, while Mill tends to discuss slavery as a concept that is firmly in the past, in reality there were still several countries—such as Cuba and Brazil—that had not yet abolished slavery at the time he was writing. This is important, as Mill’s framing of slavery as something that was widely condemned at the time he was writing is historically accurate.

Other Books Related to The Subjection of Women

The Subjection of Women is an early predecessor of feminist philosophy, but it was far from the first of its kind. In 1792, Mary Wollstonecraft published A Vindication of the Rights of Woman, a text that argued in favor of women’s human rights (without necessarily going so far as to assert that men and women were truly equal). Mill’s own wife, Harriet Taylor Mill—with whom he collaborated on The Subjection of Women as well as other works—published an essay in 1851 entitled “The Enfranchisement of Women” which contains many similar arguments to those Mill makes. Later, in 1858, the formerly enslaved abolitionist Sojourner Truth gave a speech entitled “Ain’t I a Woman?” that is considered to be one of the most important early predecessors of Black feminist theory.
Key Facts about The Subjection of Women

Extra Credit for The Subjection of Women

Team Effort. In his autobiography, Mill notes that parts of The Subjection of Women were inspired by his stepdaughter, Helen Taylor. He also stated that “all that is most striking and profound in what was written by me belongs to my wife.”

Object of Ridicule. The Subjection of Women was controversial when it was published, and many people mocked Mill for championing women’s rights. In an 1873 issue of Vanity Fair, for example, the cartoonist Leslie Ward (known as “Spy”) drew a caricature of Mill entitled “A Feminine Philosopher.” 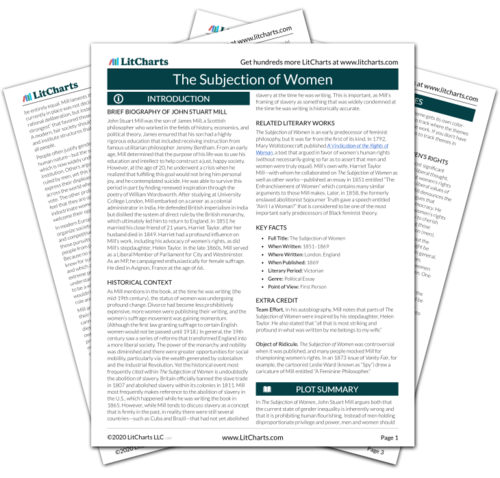 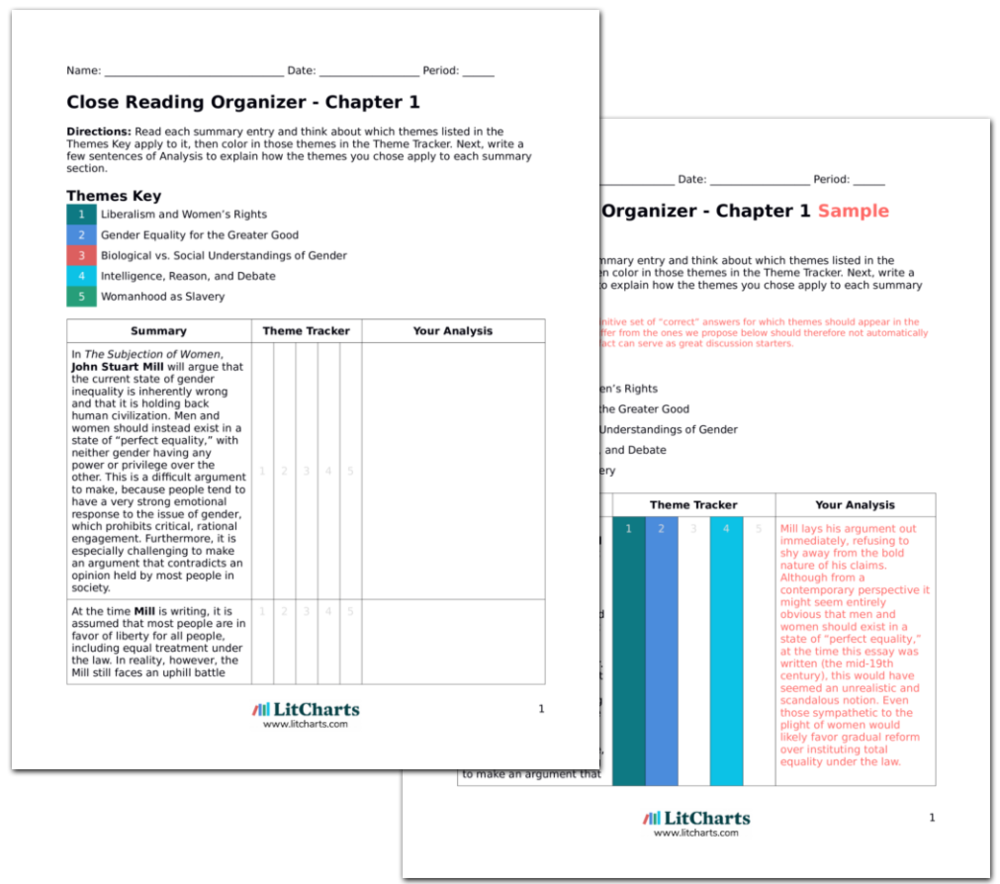