Download this LitChart! (PDF)
Teachers and parents! Struggling with distance learning? Our Teacher Edition on The Sun Does Shine can help.

Welcome to the LitCharts study guide on Anthony Ray Hinton's The Sun Does Shine. Created by the original team behind SparkNotes, LitCharts are the world's best literature guides.

The Sun Does Shine: Introduction

A concise biography of Anthony Ray Hinton plus historical and literary context for The Sun Does Shine.

The Sun Does Shine: Plot Summary

A quick-reference summary: The Sun Does Shine on a single page.

In-depth summary and analysis of every chapter of The Sun Does Shine. Visual theme-tracking, too.

The Sun Does Shine: Themes

Explanations, analysis, and visualizations of The Sun Does Shine's themes.

The Sun Does Shine: Quotes

The Sun Does Shine's important quotes, sortable by theme, character, or chapter.

The Sun Does Shine: Characters

Description, analysis, and timelines for The Sun Does Shine's characters.

Description, analysis, and timelines for The Sun Does Shine's terms.

The Sun Does Shine: Symbols

Explanations of The Sun Does Shine's symbols, and tracking of where they appear.

The Sun Does Shine: Theme Wheel

An interactive data visualization of The Sun Does Shine's plot and themes.

Anthony Ray Hinton, who goes by the name Ray, was born in Praco, Alabama, in 1956 and was the youngest of 10 siblings. During Ray’s childhood, his father received a severe head injury in a mining accident and was sent to live in an institution for the rest of his life, leaving Ray to be raised solely by his mother, Buhlar. Ray graduated high school and worked in the coal mines for several years before working for Manpower, a labor company in Birmingham, Alabama. When Ray was 29 years old, he was wrongfully convicted of two murders and sentenced to death by the state of Alabama, despite the fact that he had a strong alibi and little evidence connected him to the murders. He subsequently spent almost 30 years on death row fighting his conviction until he and his lawyer Bryan Stevenson brought an appeal to the U.S. Supreme Court. The court ruled that Ray had received a constitutionally deficient defense, and he was given a new trial to review the ballistics evidence. As a result, the state of Alabama dropped all charges against him and he was released in 2015. After being released, Ray published his memoir, The Sun Does Shine, in 2018, and he now advocates for the abolition of the death penalty.
Get the entire The Sun Does Shine LitChart as a printable PDF.
"My students can't get enough of your charts and their results have gone through the roof." -Graham S.
Download 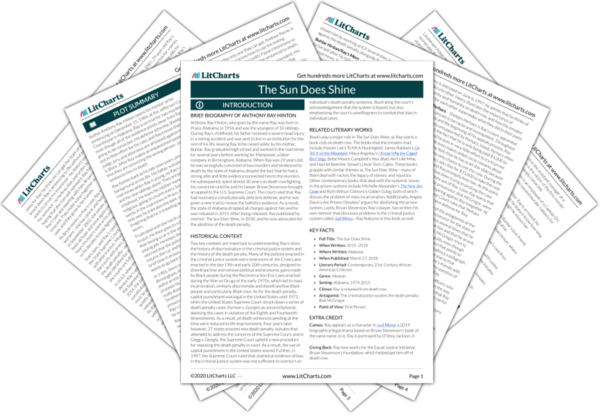 Historical Context of The Sun Does Shine

Two key contexts are important to understanding Ray’s story: the history of discrimination in the criminal justice system and the history of the death penalty. Many of the policies enacted in the criminal justice system were extensions of Jim Crow Laws enacted in the late 19th and early 20th centuries, designed to disenfranchise and remove political and economic gains made by Black people during the Reconstruction Era. Laws enacted during the War on Drugs of the early 1970s, which led to mass incarceration, similarly discriminate and disenfranchise Black people and particularly Black men. As for the death penalty, capital punishment was legal in the United States until 1972, when the United States Supreme Court struck down a series of death penalty cases (Furman v. Georgia) as unconstitutional, deeming the cases in violation of the Eighth and Fourteenth Amendments. As a result, all death sentences pending at the time were reduced to life imprisonment. Four years later, however, 37 states enacted new death penalty statutes that attended to address the concerns of the Supreme Court, and in Gregg v. Georgia, the Supreme Court upheld a new procedure for imposing the death penalty in court. As a result, the use of capital punishment in the United States soared. Further, in 1987, the Supreme Court ruled that statistical evidence of bias in the criminal justice system was not sufficient to overturn an individual’s death penalty sentence, illustrating the court’s acknowledgement that the system is biased, but also emphasizing the court’s unwillingness to combat that bias in individual cases.

Other Books Related to The Sun Does Shine

Books play a major role in The Sun Does Shine, as Ray starts a book club on death row. The books that the inmates read include Harper Lee’s To Kill A Mockingbird, James Baldwin’s Go Tell It on the Mountain, Maya Angelou’s I Know Why the Caged Bird Sings, Bebe Moore Campbell’s Your Blues Ain’t Like Mine, and Harriet Beecher Stowe’s Uncle Tom’s Cabin. These books grapple with similar themes as The Sun Does Shine—many of them deal with racism, the legacy of slavery, and injustice. Other contemporary books that deal with the systemic issues in the prison systems include Michelle Alexander’s The New Jim Crow and Ruth Wilson Gilmore’s Golden Gulag, both of which discuss the problem of mass incarceration. Additionally, Angela Davis’s Are Prisons Obsolete? argues for abolishing the prison system. Lastly, Bryan Stevenson, Ray’s lawyer, has written his own memoir that discusses problems in the criminal justice system called Just Mercy—Ray features in this book as well.
Key Facts about The Sun Does Shine

Extra Credit for The Sun Does Shine

Cameo. Ray appears as a character in Just Mercy, a 2019 biographical legal drama based on Bryan Stevenson’s book of the same name. In it, Ray is portrayed by O’Shea Jackson Jr.

Giving Back. Ray now works for the Equal Justice Initiative, Bryan Stevenson’s foundation, which helped get him off of death row. 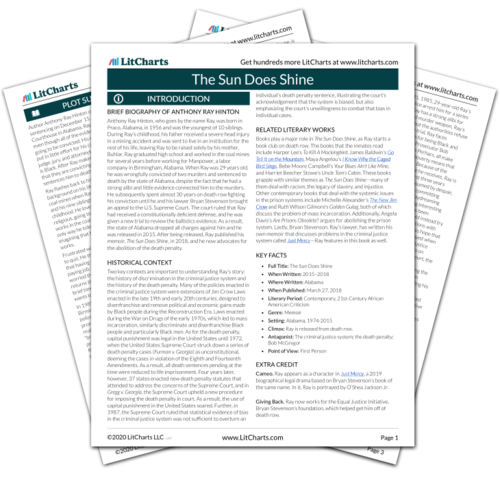 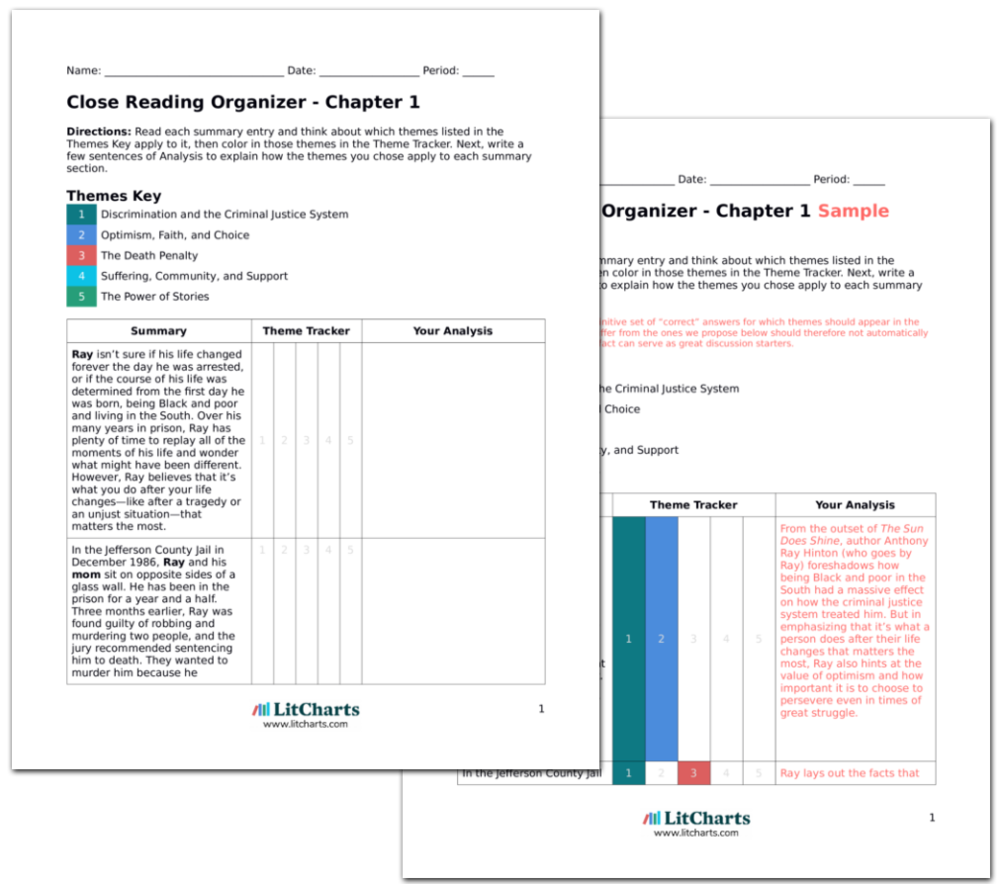